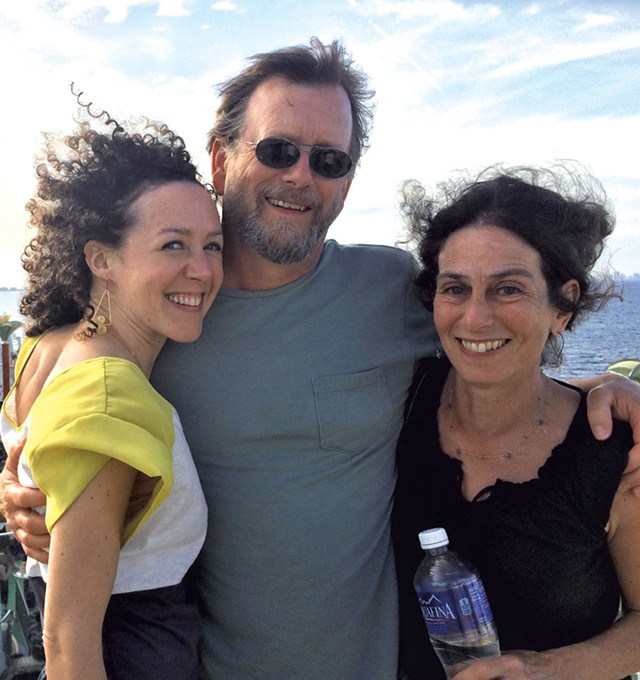 An upcoming group show at Furchgott Sourdiffe Gallery is titled "Transitions," and not just because New Year's Eve is around the corner. A more significant turn of the page at the 28-year-old Shelburne gallery and frame shop is that founders Brad Sourdiffe and Joan Furchgott are selling the business. Effective January 2, employee Lara Maloy and her partner, Nico Sardet, will take the reins.

Sourdiffe says he expects a smooth transition for all involved — including artists and clientele — because Maloy has already been with the gallery for 14 years. "Lara and Joanie have been running the business together for quite a while," he says. "Lara has a lot of the abilities."

Maloy, who handles many of the day-to-day framing jobs, says she enjoys the balance of business and creative design. Sardet is a skilled carpenter and will also do framing and refinishing.

Because of Sourdiffe's expertise in hand-finishing custom frames, he'll remain at the shop for a while and train Maloy in his techniques. But he plans to retire another of his specialties: restoring antique frames. Sourdiffe, who has restored the frames of valuable paintings at the Vermont Statehouse, says he doesn't know of anyone else in the area with this particular métier.

Meantime, the exhibit "Transitions" will open on December 6 and feature the work of 17 artists represented at the gallery over the years. Many more of them, along with loyal customers, are likely to pack the rooms of this graceful Victorian venue to celebrate its past and future.

Succession plans don't always work out as expected. A changing of the guard didn't ensure the survival of Stowe's West Branch Gallery & Sculpture Park. According to director Stephanie Gueldner, the 20-year-old gallery will close at the end of the business day on Wednesday, November 20. Next-door Stowe Cider, she says, will eventually expand into the gallery space.

While that's good news for the cider biz, it spells more bad news for the town's art community; the closure of West Branch follows those of Green Mountain Fine Art Gallery and the Stowe facility of Middlebury-based Edgewater Gallery this year.

About two and a half years ago, married founders and artists Tari Swenson and Chris Curtis sold West Branch to a group of Virginia-based partners affiliated with the cidery. Two have since left. Marc Chretien and Betsy Haines remain; a former adviser to the commander of Afghan forces, Chretien also owns and operates a cidery in Virginia. Since the 2017 purchase of the Mountain Road building, he has been a hands-off gallery owner; perhaps it's not surprising that the expansion needs of the beverage business ultimately prevailed.

West Branch has a reputation for offering high-quality artwork to collectors at mid-level prices. But Gueldner acknowledges that foot traffic to the gallery has steadily declined in recent years. "Culturally, it feels like there's a shift in Stowe," she says. "Younger people are more interested in experiences than buying things. And a lot of people are nervous — election years are historically not good for art sales."

Curtis, a stone sculptor, has a separate agreement for his capacious workspace at the back of the building, Gueldner notes, with "two and a half or three years" left on his lease. He recently placed new work in the adjacent outdoor sculpture garden, but "nothing changes between first snow and spring," Gueldner says.

All of the outdoor sculptures are still for sale, however; QR codes with artist contact information have been placed on each piece. "Going forward, it will be Chris' decision what to do with that," Gueldner says. Curtis was traveling and unavailable for comment.

Indoors, it's a different story. After Wednesday, local artists can come to pick up their artwork from the gallery, while other works will have to be shipped to artists who live farther away, including overseas, Gueldner says. "It's unfortunate that it's the arts that have to go," she laments. "It's pretty disappointing." 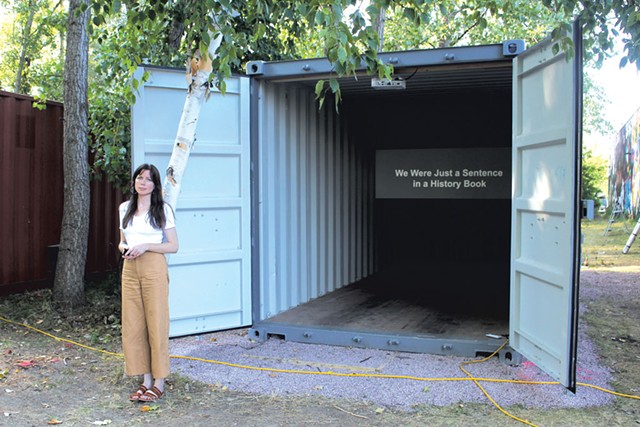 Over nearly five years, Burlington-based Overnight Projects presented almost a dozen site-specific, conceptual, multimedia art installations and performances, working with a variety of artists both local and from out of state. This month, it comes to an end.

Overnight Projects evolved from the evocative and controversial 2015 installation "An Order" at the former St. Joseph's Orphanage. At the time, founders Abbey Meaker and Sarah O Donnell described the venture as "a nomadic experiment in curating 'immersive environments,' with a focus on activating 'abandoned and in-between spaces.'"

At first, the sites and the content were conjoined; over time, the physical spaces became less critical, "but the work continued to be experiential, ephemeral and non-commoditized," Meaker says. A recent project was last summer's "Liminal States" at Generator, which examined the U.S.'s history of separating asylum-seeking families and incarcerating children.

Though Meaker, 35, says Overnight Projects was created to present "the work that we wanted to see" in Vermont, it has become too much for her to manage. The problem with non-commoditized projects is that no one gets paid. "It's hard to work full time and do this work without getting compensated," acknowledges Meaker, whose full-time work has been, for the past 13 years, directing Vermont-based sculptor Richard Erdman's studio.

O Donnell left Overnight Projects toward the end of 2016; she is now executive director of the American Institute of Architecture Vermont. "I just couldn't keep doing it all," Meaker says, referring to conceiving, curating and directing projects as well as locating sites and engaging artists. And, she adds, "It felt contrary to the ethos of Overnight Projects to form a more organizational structure." In other words, she didn't want to institutionalize Overnight Projects or answer to a board.

Meaker, whose personal medium is photography, says she is happy with the connections she made through Overnight Projects. "I don't often find women contemporaries who are driven, like I am, by their work," she notes. "I'm starting something called Artist Field. I want to organize residencies, walks, more environmental projects." At the same time, Meaker says, she wants to keep "moving away from objects and toward experience and anti-commodification."