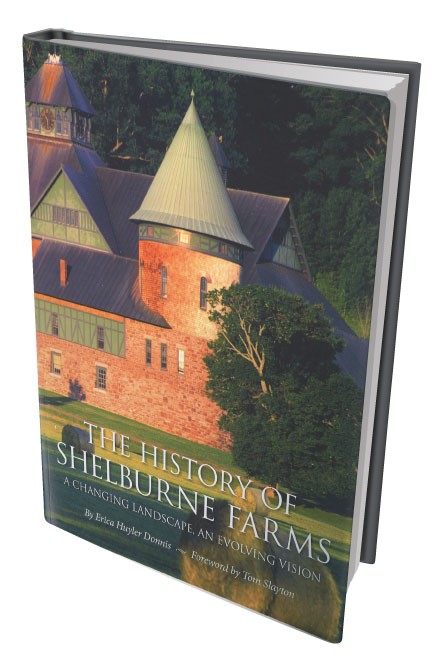 When you live in the Burlington area, it’s easy to take for granted that 20 minutes away is a place where you can see pastures stretching into the hazy distance, or foxes cavorting on the lawn of a Gilded Age brick pile.

You shouldn’t. Erica Huyler Donnis’ new book The History of Shelburne Farms: A Changing Landscape, an Evolving Vision reminds us just how strange it is that 1500 acres of farm- and parkland — prime real estate — stretch nearly undivided along the shores of Lake Champlain.

Consider that it took until 1989 for Shelburne Farms — established more than a century earlier — to stop losing money. Donnis, a former curator of collections at the estate who worked on the book for nearly a decade, notes that “the Shelburne Farms estate was not designed to be a profitable operation, and it probably never was” — at least not until its centennial, when the brick mansion opened as an inn.

Of course, making a buck was no great concern to Lila Vanderbilt Webb, who inherited $10 million from her railroad baron father in 1885 and promptly began buying up Shelburne farmland with her husband, W. Seward. Their country estate eventually stretched some 3800 acres.

In its heyday, Shelburne Farms was a veritable private agrarian Disney World with a massive barn and horse-breeding facility, a dairy, a pheasantry, a piggery, yachts, golf links, 25,000 square feet of greenhouses, state-of-the-art electrical and communications systems, and hundreds of employees. It hosted presidents and slews of wealthy guests. Like lords of the manor, the Webbs owned the Shelburne railroad depot (where they graciously allowed public trains to stop) and heavily endowed the town’s Episcopal church.

But, paternalistic as they may have been, the couple was committed to the principle of “model farming.” Donnis details how the Webbs used their estate as a laboratory for agricultural experiments they hoped would benefit the common farmer. Fast-forward to the present, and model farming’s 21st-century counterpart is “sustainability education,” to which the Webbs’ heirs are dedicated.

Donnis’ book is thick with names and figures, as one expects from an official history based on archives. If you’re looking for the Webb family’s dirty laundry, you won’t find it here. But an intriguing story does emerge — the story of a fabulously privileged family that fell in love with a place and refused to leave, even if that meant succeeding generations had to get their hands dirty.

Literally. Donnis narrates how Lila’s grandson Derick Webb (1913-84) embraced the farming life after he suffered an eye injury that made him unfit for office work. Son Marshall joked that the smell of manure didn’t leave his father till he was elected to the state legislature.

In the late ’60s, facing skyrocketing property taxes, Derick Webb considered leasing parcels of the estate to companies like IBM. But his six kids, baby boomers catching the first wave of environmentalism, put a stop to that. In 1972, they formed a nonprofit called Shelburne Farms Resources and began transforming the estate into a publicly accessible center for conservation education, which it remains to this day.

Gracefully written but fact heavy, The History of Shelburne Farms is best enjoyed by people who already love the place and want to explore its past. Not surprisingly, stacks of the glossy coffee-table volume — published by the Vermont Historical Society — weigh down a table at the estate’s Welcome Center. Its many black-and-white archival photos offer points of comparison between then and now. For instance, readers will see just how radically the ravages of Dutch elm disease changed the look of the estate.

In 1907, Lila Webb wrote in a letter, “In spite of everything we have seen, we are still more than ever content with Shelburne, and it is very difficult to beat the views we have there.” No wonder that, unlike so many palatial American estates built before federal income taxes, Shelburne Farms stayed in the family. The views that were good enough for a Vanderbilt still look pretty good to the rest of us, too.