There's a trend brewing among Vermont's newest beer producers: Think small. Over the past year and a half, several have opened with brewing systems and tiny teams that make the state's microbreweries look huge.

That scale lends itself to experimentation, whether in beer style or business model. And thanks to their size, these breweries fit in some pretty cool places: garages, reclaimed downtown storefronts and even the back of an old bagel shop.

Here are three new nanobreweries off the beaten path — or at least off the state's more established beer trail — and scenic routes to get to them. Grab a designated driver and enjoy a taste of some of the newest breweries on the map.

The team behind Two Heroes Brewing has big plans, but you wouldn't know it from walking into the current taproom: It only has eight stools.

"This is the pilot space," said taproom manager Danielle Orr, standing between tanks in a back room of the building on the corner of Routes 2 and 314 in South Hero.

Business partners Matt Bartle and Daren Orr, Danielle's husband, started brewing together in the same small space about a decade ago, back when it was the original Wally's Place, a popular Champlain Islands bagel bakery. (Bartle owns the bagel shop, now down the road.)

"We had a little homebrew system right here," Bartle said. "We'd fold it up against the wall. On brew day, we'd be running hoses all over the place."

The pair's beer biz plans took shape over the years as they watched the industry change and looked at the community's needs. After an extensive engineering and permitting process — and pandemic delays — they'll break ground on a 3,500-square-foot brewpub this fall at 260 Route 2.

They launched the current version of Two Heroes in February, figuring it was better to start small and get their name out there than wait at the whim of the pandemic.

Head brewer Daren works on a two-barrel system in the temporary space, double-brewing to yield four-barrel batches. "It's a long day," he said. "And that's not a lot of beer, but it's cool because if things don't go the way I want, it's not a big deal."

Two Heroes sources local grains and hops for its German, Belgian and American styles. Those traditional beers will come in handy at the new brewpub: They're easier to pair with food than a lineup of big, hoppy IPAs — though there are a few of those, too.

For now, customers can sip pints in the taproom and its rustic outdoor space — made from repurposed pallets that held equipment and grain deliveries. It's been a busy first summer, with a mix of locals, tourists and daytrippers from Chittenden County.

"It's never going to be super developed up here," Danielle said. "But word's getting out that the islands are a destination."

How to get there: The short trip across the Route 2 causeway from Milton to South Hero is part of the 184-mile Lake Champlain Byway, which follows the lake from Addison County to the Canadian border.

What to try: Stop by in mid-September for a Vermont farmhouse ale made with local wheat, honey and hops. Later in the month, the brewery will celebrate Oktoberfest with a full slate of German beers. It will also release its own bottle-conditioned cider this month — made with apples from Allenholm Farm — under the label South Hero Fermentation. 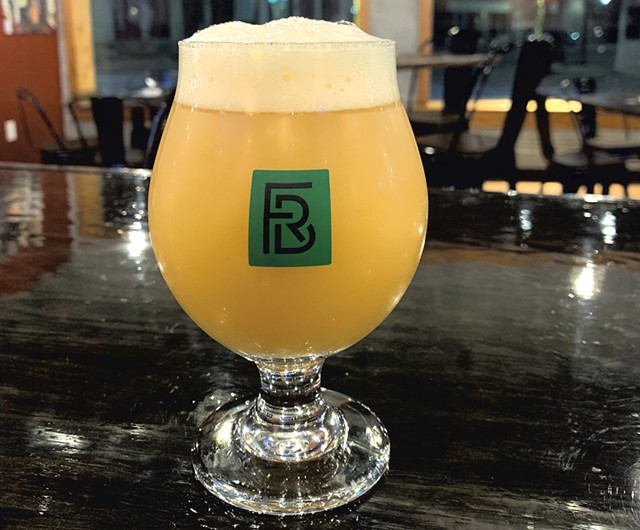 While breweries, cideries, wineries and distilleries have proliferated elsewhere in the state, the southwestern corner has been comparatively dry.

"Vermont has the highest number of breweries per capita, but when I was looking to open, there were only two in Bennington County," Seth Barrows explained. Launched in February, his Farm Road Brewing is the third. And Bennington was ready for it.

Farm Road's taproom has a floor-to-ceiling view of downtown's Four Corners, making it perfect for people watching — and observing the Putnam Block redevelopment project across the street.

The Main Street storefront had been vacant after stints as a CBD shop and a real estate office, Barrows said. "I always looked at this spot and went, 'This is supposed to be the corner bar.' It's just what it looks like. And that's what we built here," he added. 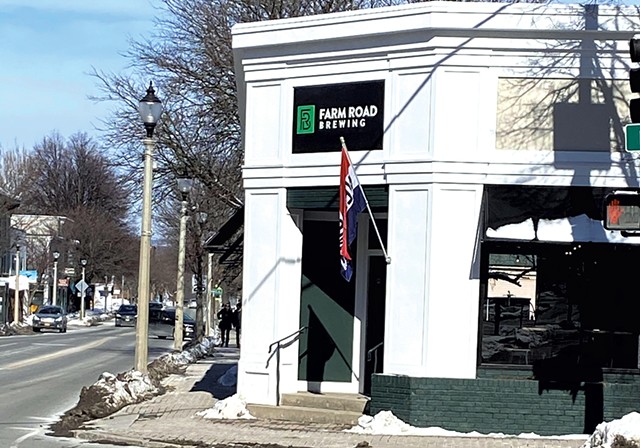 After a 27-year career in the military, Barrows wanted to be his own boss. He'd been homebrewing for seven of those years and had fallen in love with the craft.

"I totally geeked out about the whole thing," he said. "But as a homebrewer, I knew I didn't know what I didn't know." He attended the American Brewers Guild's six-month course in Middlebury, then signed the lease on the storefront in January 2020.

Farm Road's four-barrel brewing system and 1,400-square-foot space teeter on the edge of nano, but production happens in just 400 square feet. The 40-seat taproom has a shady spot out back with more tables, and there's a small kitchen serving bar food prepped by nearby Ramunto's Brick Oven Pizza. 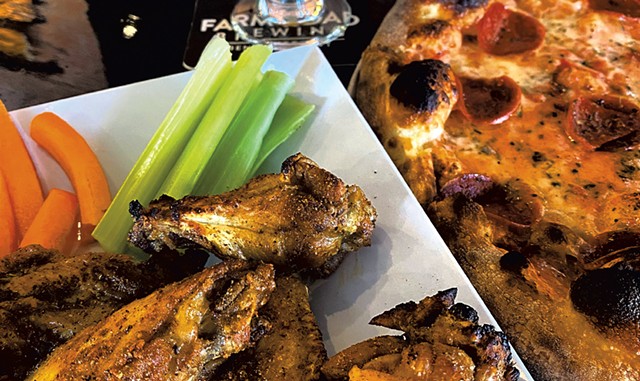 Barrows devotes one tap line to cider from Windsor's SILO Distillery; for the other 11, he brews everything from cream ales to saisons. So far, the best seller has been Bronson, a New England IPA. "I think I'm on batch No. 6 of that," he said. "But I want to have a broad spectrum. There's a beer for everybody out there."

"Against my better judgment," he said with a chuckle.

How to get there: "Route 9 over the mountain, with a stop at the lookout," Barrows said, referring to the 48-mile Molly Stark Byway connecting Brattleboro and Bennington. "That's gotta be the perfect spot."

What to try: Sip a pint of Baker's Head cream ale now. As the weather cools, look for a stout or a porter aged in whiskey barrels that previously held local maple syrup. 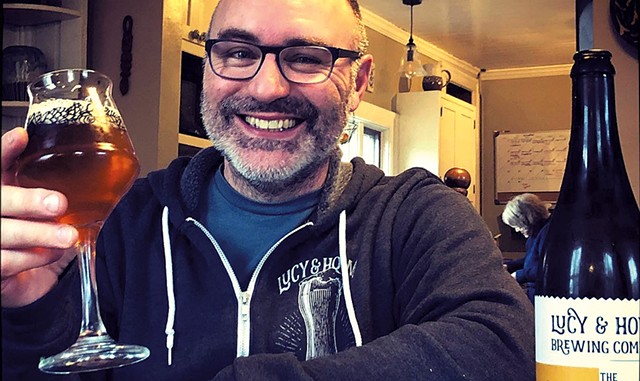 Jesse Cronin has an enviable commute: It takes him less than 30 seconds to get from his house to Lucy & Howe Brewing, which he started in his Jericho garage in May 2020.

Cronin's plans for a brewery of his own had been on the back burner while he worked as a lead brewer for Magic Hat. Like so many things, that changed in March 2020 when the state shut down and work got exponentially busier for his wife, Libby Bonesteel, superintendent of the Montpelier Roxbury Public School District.

"She came home and was like, 'I'm not gonna be around a lot,'" Cronin said with a laugh. "Our kids were home, and I said, 'Well, I guess we're doing this thing now.'"

As Cronin got the 400-square-foot, 1.5-barrel brewery up and running, the kids sat nearby so he could help them with math.

Since then, he's been brewing Belgian- and world-focused ales and lagers with local ingredients and distributing them through Vermont Beer Shepherd, the Jericho Farmers Market and the brewery behind his house on a dead-end street.

"I don't make it super easy to come here," Cronin said, noting that the brewery is only open for tastings and sales on Friday and Saturday afternoons from 1 to 5 p.m. When visitors stop in, he offers them a seat on the steps outside and samples of the ever-changing lineup.

Over the summer, customers could jump in and Learn to Float (a low-ABV sour gose brewed with staghorn sumac, red currants and sea salt) or gain a Touch of Wisdom (a Belgian strong golden ale).

Cronin makes the most of his small space by brewing double batches back-to-back. "There are lots of very easy ways to increase efficiencies and production," he said. "But I don't want to grow super fast, because I like being available for the kids. And with this size, I can pay attention to every detail."

How to get there: The 71-mile Green Mountain Byway runs from Waterbury to Cambridge and includes the winding ride through Smugglers' Notch on Route 108 — at least until that closes for the season in mid-October.

What to try: This fall, Lucy & Howe will stock local stores with Biere Maison, a Belgian style table beer; Our Impossible Ask, a New England double IPA; and Underwater Space Helmet, an IPA. Grade School Ninja and Weeping Over the Unicorn, a British-style pub ale, will be released at the brewery.