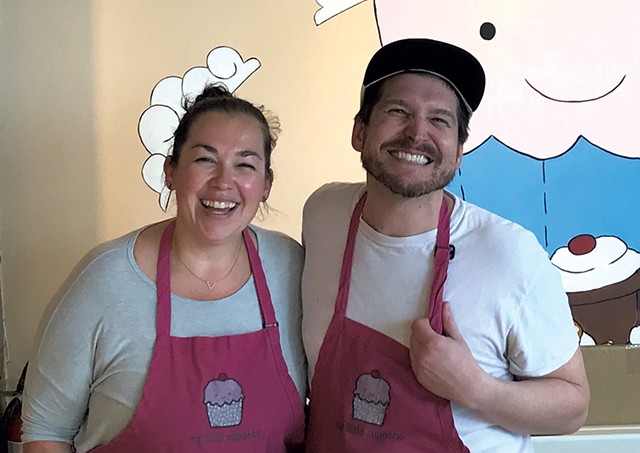 In March, My Little Cupcake founder Michelle Trudell announced that she would close her business at the end of April. Since then, there's been a change of plans: Trudell recently confirmed that she has sold the business to two longtime employees for an undisclosed amount. The new co-owners, Matt Labare and Madison Russett, will continue to supply wholesale accounts and fill special orders of the bakery's miniature cupcakes and cake pops while they look for a new bakery space.

The former My Little Cupcake location at 217 College Street in Burlington is still expected to reopen in August as the new storefront of Belleville Bakery.

Labare, an Underhill native, became My Little Cupcake's first full-time employee in early 2011. "I'm a long-hauler," he joked. Russett joined the team in 2012 and worked there until 2016, when she left her home state of Vermont for the West Coast.

After moving back in early 2022, Russett jumped in to help out at the bakery around Valentine's Day. One morning this spring after Trudell announced the closure, Labare and Russett were working together. "I said, 'Wait, we can do this!'" Russett recalled.

When they approached their boss, "She was really excited we wanted to keep it going," Labare said.

"Without hesitation, I said yes!" Trudell said. "Matt makes the cupcakes every day. If anybody's going to be able to run it, it's those two."

For the immediate future, the business partners will focus on stocking both City Market, Onion River Co-op locations and Healthy Living Market & Café's two Vermont locations while they gear up for the busy wedding season.

Regarding a new storefront, they hope to find a production baking kitchen with a small retail space for takeout sales. "We are looking for a new home, but not necessarily in Burlington," Labare said.