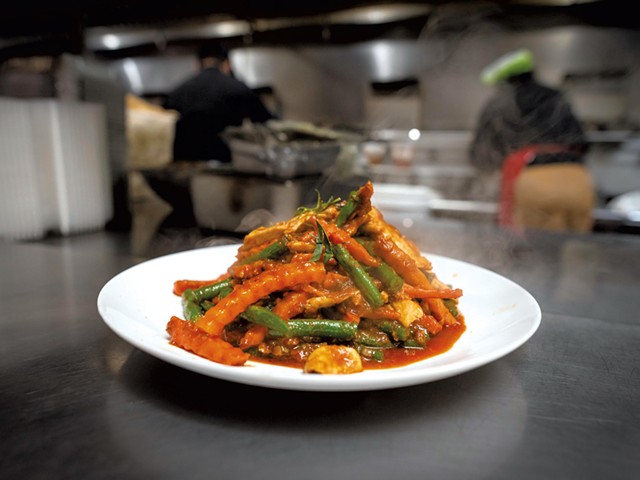 Coming to Vermont was a big change, Sai Nitchamon said as we embarked on a multicourse dinner. She had agreed to guide me through a meal at Maliwan Thai Restaurant in Essex, which married co-owners Jeanne Sucharitaves and chef Jirapon "Noom" Chaisuwan opened just before Christmas in the space occupied by Joyce's Noodle House for almost two decades.

Born and raised in Bangkok, Nitchamon married a native Vermonter and moved to Newport in 2001. Over a first course of chewy rice-flour chive dumplings ($5), tangy green-papaya salad ($8.50), and maple-kissed grilled moo ping pork ($8) eaten with fingerfuls of sticky rice ($3), she detailed just a few of the differences between her current and former homes.

Nitchamon, who now lives in South Burlington and works as a nurse at the University of Vermont Medical Center, hasn't chopped any wood since settling in Vermont. She has learned to dress in layers during the winter, though she still misses the foods of home.

"For us, Thai food, when it's spicy, is flavorful." Jeanne Sucharitaves tweet this

She tried to grow lemongrass, the fragrant, citrusy herb used in many Thai dishes, in her backyard. Even when she managed to harvest some, "it was pretty sad," she said with a rueful smile. "It tasted mostly like grass; no lemony essence. It's still Vermont sun, not Thai sun."

After 20 years in Vermont, she wrote, "I've learned to dial down my expectations when it comes to Thai food." Maliwan impressed her, and she urged others to give it a try. She readily agreed to meet me there and help me get the most out of my dining experience.

Before that visit, I texted Nitchamon for advice on my first takeout order. One of her recommendations, kua kling or turmeric chicken ($15), turned out to be delicious but burning with a fiery heat. I should have been forewarned by the dish's spice options, which were limited to the top tier of Maliwan's heat scale.

My husband took one bite of the kua kling and immediately started sweating, blowing his nose and chugging milk, all the while sputtering: "I'm sorry I'm not the man you thought I was."

I shared leftovers of the dish with a friend who always wants her food spicier. Though she enjoyed it, even she acknowledged that it tested her.

By contrast, the larb salad ($8.50) featured ground chicken like the kua kling but at a two-chile (medium) heat level. Its dressing was refreshingly limey, herby and fish-sauce funky, and it had loads of red onion and a just-to-my-taste hit of chile. Also ordered at medium, the coconut-bathed panang curry with shrimp ($15) balanced its heat with tongue-calming, creamy sweetness.

When I later spoke with Maliwan co-owner Sucharitaves, she recommended ordering sweet, milky Thai iced tea or coffee ($2.50) to mellow the burn. She also noted that most of the dishes on the menu can be made without any heat — or all the way up to extra spicy.

But not the kua kling. "That dish was made to be spicy," Sucharitaves said, explaining that it's from the south of Thailand, where the food packs more heat to match the temperatures. 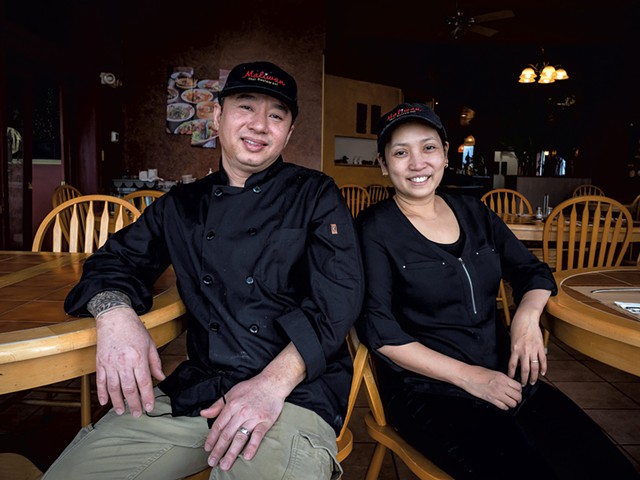 Even when chiles don't dominate Maliwan's cuisine, they are always there playing a critical bass note. "For us, Thai food, when it's spicy, is flavorful," Sucharitaves said.

Sucharitaves, 46, and Chaisuwan, 45, live in Essex with their three children. The kids are often with a babysitter in the big back room of the restaurant, which is also available by reservation.

In addition to managing the front of the house and filling in as needed in the kitchen, Sucharitaves works full time remotely as an engineer for GlobalFoundries. She came to the U.S. from Bangkok in 1995 to study computer science at Dartmouth College through a Thai government program; after graduation, she landed a job at what was then IBM.

The couple met after Sucharitaves returned to Thailand in 2007. Chaisuwan is from Chiang Rai, the country's northernmost city. They opened their first restaurant together there in 2010, while still dating. It was also called Maliwan, which means jasmine in Thai.

"I guess we were committed," Sucharitaves said with a chuckle.

She moved back to Vermont with her husband in 2012. "We wanted to have our family here," she said, chatting in the restaurant one morning last week with her 8-month-old strapped to her chest.

Chaisuwan worked for other restaurants until 2018, when the couple opened their first Vermont spot, Thai Smile, in Waterbury. They sold it last year to a friend, Arut Cheesungworn, and jumped on the opportunity to take over the Joyce's Noodle House location, just five minutes from their home.

Much of Maliwan's menu consists of Thai classics, such as pad Thai ($13 to $18, depending on the protein), and saucy curries, such as the panang I sampled at home. Beyond chiles, the signature flavors and fragrances of the dishes include the deep, salty umami of fish sauce; the citrus notes of Thai basil, lemongrass and makrut lime leaves; and galangal, which is similar to ginger.

The chef makes some concessions to availability and customer needs, Sucharitaves said, such as avoiding shrimp paste due to the prevalence of shellfish allergies. Thai spice pastes often include fresh cilantro root, but stems are substituted when it's scarce.

"In the summer, we grow our own cilantro and scallions," Sucharitaves said.

The couple also has a flock of 150 ducks, whose eggs play a starring role in the coconut custard with sticky rice ($5). I am still dreaming of this smooth, rich custard speckled with toasted sesame seeds, served on a pillow of mixed, sweet sticky rice in a puddle of thick, reduced coconut milk.

Nitchamon met Sucharitaves before Maliwan opened, when she bought some of the family's duck eggs. That was her first hint that the restaurant would stand out.

During my dinner with Nitchamon, she modeled how a meal unfolds in Thailand. Thai do not eat with chopsticks or knives, she said; proteins are almost always cut small, and the proportion of meat to vegetables or other ingredients is lower than in the U.S. — though Maliwan and other Thai restaurants cater to the American appetite for meat. She introduced me to several new dishes and ordered a side of sticky rice to go with our appetizer spread, which I highly recommend.

Sucharitaves later told me that sticky rice is a staple in northern Thailand, her husband's native region. Farmers eat it before going to work in the fields. "It keeps you full longer," she said. As a finger food, sticky rice is also a good vehicle for delivering sauces to the mouth. 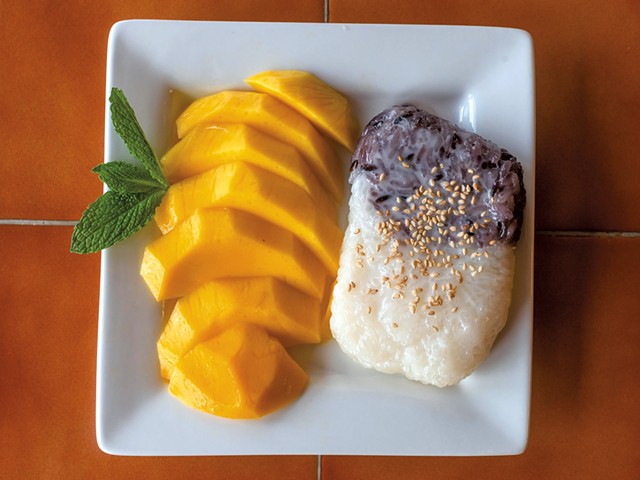 Of the small plates, I especially loved the crisp exterior and tacky, soft interior of the sticky rice-wrapped chive dumplings. I did wonder, though, whether the allium flavor would be more pronounced with fresher chives than what New England in February has to offer.

When Nitchamon ordered our next round of food, she added a fried egg to the basil duck stir-fry ($20 plus $2 for the egg). The puffy, oil-basted egg broke open to reveal a runny yolk, which beautifully complemented crisp, rich morsels of poultry cooked with ample garlic, chile and loads of fried basil.

In Thailand, it's common to add a fried egg to dishes. Sucharitaves' own favorite on the Maliwan menu is a popular street food: ka prow chicken with fried egg ($16), made with ground chicken, basil, onion and fresh chile.

When I returned to the restaurant to chat with Sucharitaves, I peeked into the kitchen as Chaisuwan and his team prepared for lunch. Huge woks sat on massive burners. Tubs and squeeze bottles of chile pastes and sauces, chopped peanuts and garlic, and buckets of eggs stood at the ready.

I ordered two final items for a takeout lunch. One was my standby Thai favorite: tom kha with chicken ($5) in a light, limey, galangal-infused coconut broth. The other was a dish to which I was introduced on a trip to northern Thailand a few years ago: khao soi ($13). The golden-hued coconut curry broth contains boiled noodles and is served with crispy noodles, pungent pickled mustard greens and fried onions. In Chiang Mai, it came with a chicken drumstick, but in Essex, it comes with boneless sliced chicken.

That difference aside, when I took a sip of the rich, fragrant broth and closed my eyes to shut out the snow and the leafless maple in my front yard, I was almost transported for a moment back to Thailand.