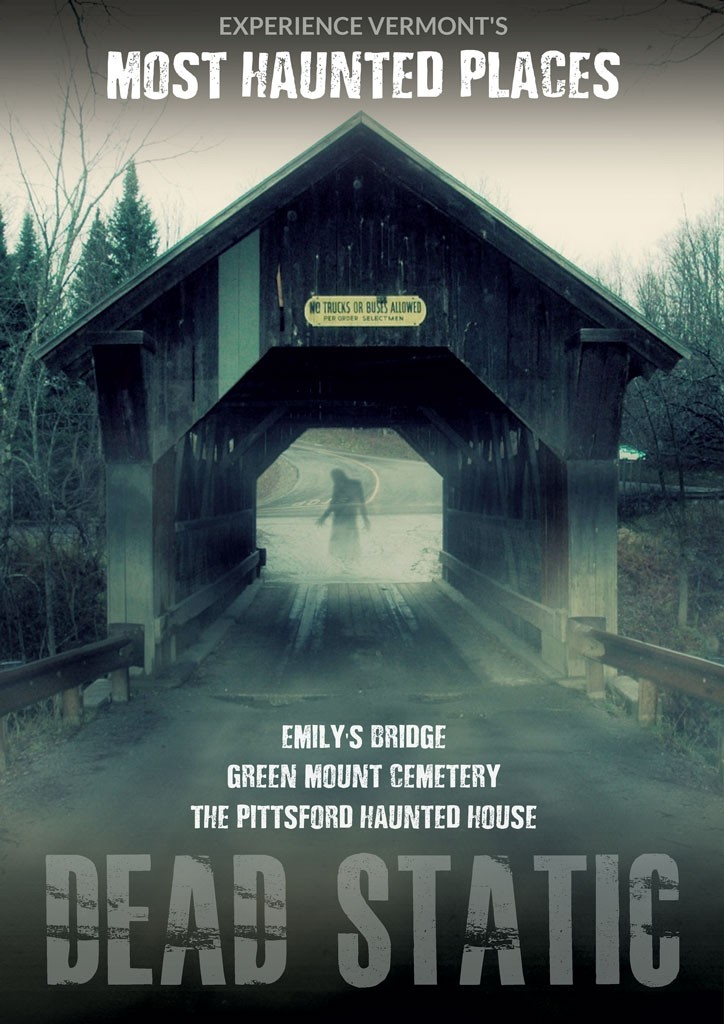 One of Vermont's most enduring legends is the haunting of a 19th-century covered bridge in Stowe. It's said that a young woman named Emily, distraught after her lover failed to meet her for their elopement, hanged herself from the bridge's rafters. Her vengeful spirit, it's said, has haunted "Emily's Bridge" ever since, moaning eerily and leaving clawlike scratches on the cars of anyone foolish enough to pass through the bridge late at night.

While the Gold Brook Covered Bridge has made it onto the National Register of Historic Places on its own merits, Vermonters still know it best as the putative home of Emily's ill-tempered ghost. Folklorist Joseph A. Citro popularized the tale in his 1997 book Passing Strange: True Tales of New England Hauntings and Horrors, making it a favorite subject for local filmmakers seeking to generate Halloweeny chills.

The latest party to seize on Emily's undying (or is it undead?) popularity is Burlington-based production company DeadFi, which has found a solid footing within self-distributed indie horror circles. "Dead Static," the company's sixth short film, is a trilogy of Vermont ghost stories — Emily's Bridge included — that positions itself within horror's trendy found-footage tradition.

Though less than half an hour long and produced for about $1,500, "Dead Static" looks every bit as assured as similar, feature-length horror movies such as V/H/S (2012) and those in the Paranormal Activity series. Ever since The Blair Witch Project gave a jolt to the found-footage subgenre in 1999, filmmakers have understood that a rough-hewn, shaky-cam aesthetic can boost a film's fright factor. "Dead Static" is no exception.

In fact, it was a mediocre found-footage horror film that inspired DeadFi's owner and founder. Owen Mulligan — the writer, director, editor, coproducer and covideographer of "Dead Static," as well as one of its actors — got started in the genre after seeing and disliking horror maestro George A. Romero's 2007 film Diary of the Dead. "I was getting sick of seeing bad horror films and thought, I'm going to do this myself," says Mulligan. "That was the spark."

At that point, in 2007, Mulligan had no filmmaking experience. He did, however, have a network of like-minded friends from his activist days, when he was involved in the local chapter of the Marijuana Policy Project and Vermont's battle over civil unions. One of those friends was Jay Vos, who has coproduced all of DeadFi's films to date.

Mulligan, now 41, and Vos, 66, both say their experience as activists provided them with organizational skills that have proved invaluable in producing low-budget "guerrilla" films. Vos recounts nighttime shoots when he donned camouflage and hid in bushes, ready to alert the permitless crew to any passing police cars. They had a text-message code for such occasions: "5-0."

Each segment of "Dead Static" was shot at the location it depicts: Emily's Bridge, Montpelier's Green Mount Cemetery and the vaunted Pittsford Haunted House. The venues weren't chosen merely for their innate creepiness, but for the ghost stories they've engendered over the years. The cemetery is home to a statue nicknamed "Black Agnes," which is rumored to spell death for any who perch there. The Pittsford building is the site of a dilapidated children's sanatorium, allegedly still crawling with the wraiths of its former residents.

"Dead Static" merrily uses these small-town legends as springboards for its startles, shocks and scares. We may know that the intrepid curiosity seekers are doomed, but the film dispenses its chills — some digitally created, others extracted by clever camerawork or sound effects — with an aplomb that will please many horror fans.

Skilled as they are in frightcraft, the company's principals are also savvy in distributing their films. Though earlier DeadFi projects, such as the short "Night of the Vampire," have screened and received awards at film festivals, the company generally eschews those venues, instead distributing its videos exclusively via its YouTube channel.

For Mulligan, online distribution is the only sensible choice for micro-budgeted genre shorts like DeadFi's, all of which are made with equipment from Vermont Community Access Media. "Click a button, and it's global," he says. DeadFi's YouTube channel has several well-positioned subscribers, through whom a few films have been licensed to horror-themed online and cable channels.

As for film festivals, Mulligan makes no bones about his distrust of them. "The majority of [film festivals] are there to rip off filmmakers," he says. "They keep your money and your movie." Even small festivals, he adds, which purport to have the advantage of intimacy and dedicated crowds, aren't what they're cracked up to be. He and Vos recall one small-fest screening where the only patrons were the filmmakers and their companions.

For the foreseeable future, DeadFi will rely on the internet for distribution and promotion. That future includes the company's first participation in a feature, an international found-footage horror anthology called The Fear Project, slated for release next year. The film's producers saw DeadFi's work online and hired them to contribute a segment. After that, Mulligan says, DeadFi will move on from the found-footage niche. He's planning his own feature for 2016: a "traditional-style B-movie — horror, of course" with crowdfunding from DeadFi's fanbase.

Mulligan makes no apologies for hewing to a single genre. "I love the feeling of being scared," he says. "I don't know what it is for me, but there's something comforting about exploring those things that lurk in the dark."

"Dead Static" will be released on DeadFi's YouTube channel on Monday, October 27, at 7 p.m. youtube.com/user/deadfi