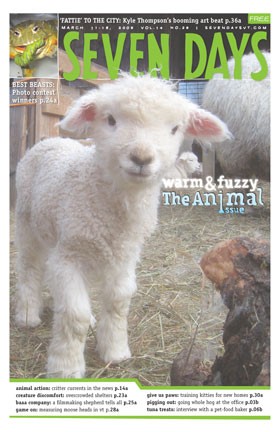 Anyone who’s ever been kept awake all night by a neighbor’s barking dog can sympathize with the desire to punish the dog — or more appropriately, the owner — for his or her negligence and inconsideration. However, in rural areas, oftentimes that late-night yapping serves a vital function: to protect the farmers’ livestock, poultry or crops from nocturnal predators.

But as more and more “flatlanders” move into Vermont’s countryside, many are either unsympathetic toward, or simply ignorant about, the important role that working dogs play on many Vermont farms. As a result, a growing number of farmers have received repeated and costly citations from police and animal-control officers simply because their farm dogs were doing their job.

In response, Rep. Phil Winters, a retired dairy farmer from Williamstown, has introduced legislation to exempt working farm dogs from municipal noise ordinances if the dogs are duly registered with the state.

Winters explains, “This bill will, hopefully, make it a little easier for folks who own these types of dogs to deal with their neighbors.”

There is no official number of working farm dogs in Vermont, but, according to Amy Shollenberger with the farmers’ advocacy group Rural Vermont, it’s estimated that about 90 percent of Vermont family farms have at least one. This bill, H.62, which passed the House on February 27, would require farmers to register their canines as working farm dogs and pay an extra fee. It’s estimated that between 50 and 100 farms would register their dogs, Shollenberger says.

“I’ve been really amazed at how many farmers have told us that they’re so glad this is coming up,” Shollenberger adds, “because a lot of folks didn’t know they had any recourse.”

For instance, Scout Proft, a farmer with Someday Farm in East Dorset, raises about 5000 chickens and uses Marama sheep dogs to protect her flock. Although Maramas are known as a quiet breed, for about three weeks each year, the dogs can bark steadily if coyotes are circling the area.

“She’s concerned that, one year, there’s going to be a complaint and the animal-control guy is going to come out and confiscate her dogs,” Shollenberger says. Other farm dogs are used to protect corn crops from deer; one farmer, Alan LePage, even keeps Jack Russell terriers to kill the woodchucks that eat his crops.

Unsurprisingly, H.62 is not without its critics; the Vermont League of Cities and Towns, for example, urged lawmakers to vote against its passage. Nevertheless, Shollenberger says this bill is narrowly tailored so that only working farm dogs that are registered as such are exempt from local nuisance ordinances. She notes that the dogs wouldn’t be permitted to stray off the farmers’ property or trespass on neighbors’ land to retrieve wayward livestock. Nor, she emphasizes, would they be protected if they bite someone.

Moreover, a working-dog license wouldn’t be a blanket protection to all bothersome barkers. As Shollenberger points out, “If your dog is just chained up in front of your house and howling at the moon, it’s not exempt.”

This story was part of our 2009 Animal Issue. Click here for more animal stories.