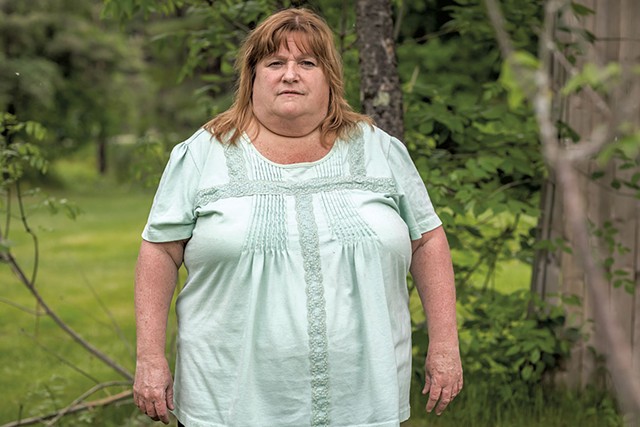 Former residents of St. Joseph's Orphanage in Burlington achieved a historic victory earlier this month: the passage of S.99, a bill that lifts the statute of limitations on lawsuits arising from childhood physical abuse. The Vermont legislation, the first of its kind in the country, allows survivors to file claims years, even decades, after the alleged abuse occurred. But for many of those former St. Joseph's residents, the reparations they seek from the Roman Catholic Diocese of Burlington, which owned the red brick orphanage on North Avenue that housed some 13,000 children from 1854 to 1974, could still be out of reach.

In the 1990s, nearly 200 St. Joseph's survivors accepted $5,000 settlements from the diocese, which could impact their ability to pursue further legal action. Those who do manage to sue may only see a fraction of the payout they hope for; the diocese claims that past and pending childhood sexual abuse lawsuits, unrelated to St. Joseph's, have pushed it to the edge of possible bankruptcy.

"This is about ... protecting the children who can't speak up for themselves now." Maura Labelle tweet this

But members of the St. Joseph's Orphanage Restorative Inquiry group, which helped initiate the legislation, say that the passage of S.99 has been a cathartic, if bittersweet, triumph. "I'm very grateful that I'm alive to see this happen," said Maura Labelle, a former orphanage resident who testified before the Vermont Senate while the bill was under consideration. "But at this point, a lawsuit can't fix me. This is about the future and protecting the children who can't speak up for themselves now."

The restorative inquiry group first convened in late 2019 after Attorney General T.J. Donovan launched a two-year investigation, prompted by a 2018 BuzzFeed article, into allegations of physical, sexual and emotional abuse of children at the orphanage. Among numerous other accounts of brutal corporal punishment, several former residents told BuzzFeed they had seen nuns kill children by pushing them out of windows.

Donovan's 286-page report, published at the end of last year, found credible evidence of widespread abuse at St. Joseph's but not of murder, the only charge that, given the time that had elapsed, could still be prosecuted under the state's criminal statutes.

After the report's release, the Sisters of Providence issued a statement deflecting blame. The investigation, according to their spokesperson, "seeks to impose a present-day legal framework, resources and disciplinary practices upon a very different era." The bishops and priests of the diocese, the Sisters asserted, bore the primary responsibility for the operation of the orphanage.

The Catholic church, for its part, has issued carefully worded acknowledgements of the role it played in causing the suffering of some former orphanage residents. "The diocese continues to accept its full share of the blame for any sins of the past," read the church's statement in the wake of the attorney general's report. "We apologize for all hurt caused and for the personal shortcomings of human beings that came before us."

For all practical purposes, the diocese is the only institution that can now be held accountable for the past.

"The state can't be sued. The Sisters of Providence can't be sued," Bishop Christopher Coyne told Seven Days. "So I guess we just have to bear the brunt of the lawsuits."

But former orphanage residents who wish to sue the diocese face a complicated legal road, according to Jerry O'Neill, a Burlington attorney who has represented dozens of plaintiffs in sexual abuse cases against the Catholic church in Vermont.

Because the diocese kept internal records of priests who were known to have sexually abused children, he said, his clients' claims have been easier to support. In contrast, O'Neill explained, former St. Joseph's residents would first need to demonstrate that the diocese had a duty to oversee the Sisters of Providence and ensure the safety of the children in their care, then prove that the diocese knowingly failed to fulfill that duty. But Vermont Catholic Charities, the arm of the church responsible for placing children in the orphanage, kept limited records on the nuns who worked there, and many of them are now deceased.

"Is this a surmountable burden? Maybe," said O'Neill. "But I think it will be hard for any of the former orphanage residents to now sue."

Over the past two decades, the diocese has paid roughly $32 million in settlements to childhood sexual abuse plaintiffs, many of whom have been represented by O'Neill. According to Coyne, the 10 pending sexual abuse cases, if settled in full, would exceed the diocese's financial resources before St. Joseph's survivors could file their claims.

"At the end of the day, like other dioceses and archdioceses across the country, we may face bankruptcy," said Coyne. Asked for the current sum of the diocese's assets, Coyne wouldn't provide a figure. "The number doesn't matter at this point, as far as I'm concerned," he said.

O'Neill, who represents eight of the plaintiffs in the diocese's pending sexual abuse cases, disagrees that the Vermont Catholic church is on the cusp of insolvency. Financial records from 2019 show that the diocese holds nearly $11 million in assets through Vermont Catholic Charities, not including properties and other investments. "There might be a battle over whether or not they can use all those funds, but they have money, just not the volume they once had," said O'Neill.

Labelle was one of the 200 former residents who accepted payouts from the diocese in the '90s. Those settlements included a nondisclosure agreement, which Coyne rescinded to allow survivors to participate in the attorney general's investigation and come forward publicly with their stories. But the diocese, he said, won't relitigate those cases going forward.

"We're not going to turn around for anything that we've already settled, whether it's for St. Joseph's residents or sexual abuse survivors," he said. "Once a case is settled, it's settled." O'Neill concurred: "It would be really challenging for any of the folks who have signed releases to now make a claim against the diocese."

But Labelle feels that the $5,000 settlement represents a paltry sliver of the justice to which she and others should be entitled. "My life was totally destroyed before it even started," she said. "Do you really think $5,000 is gonna be enough to fix that?"

Labelle lived at St. Joseph's for six months in 1961, when she was 3 years old. She said that her life has since been haunted by a memory of a little boy, whom Labelle watched climb onto a statue over the railing of a balcony in the orphanage's chapel. All of a sudden, she said she remembers, the boy vanished, and the nun who was with them was shaking her, yelling in broken English, "Look what did! Look what did!" Not long after that, Labelle said, she woke up one night and found herself in a canoe in the middle of Lake Champlain, where she watched as a nun tossed a small bundle overboard. "The nun looked at me and went, 'This could happen to you,'" Labelle recalled. She said she never again saw the boy who had climbed onto the statue. (During the attorney general's inquiry, Labelle told authorities about the boy and the bundle thrown into the lake. But investigators could not confirm her story, nor did they uncover evidence of murder at the orphanage.)

Gene Clark, who lived at St. Joseph's from 1964 to 1965, said he intends to sue the diocese in spite of the fact that he, too, received a settlement in the '90s. At that point, he said, he was fully in the grip of the psychological and physical trauma he suffered as an adolescent at St. Joseph's.

"I was drinking heavily, and I was on the verge of losing my apartment," said Clark. "I felt like I had no choice but to take that money. I accepted under duress, really." After Vermont repealed its civil statute of limitations on childhood sexual abuse, Clark met with a lawyer, but she refused to take on his case, he said, because of the settlement.

At the orphanage, Clark said, he was molested repeatedly by a priest, who would force Clark to let him hold his penis while he urinated — because, as the priest would tell him, "Little boys have bad aim."

Now, at 68, Clark said he still experiences that same visceral dread before almost any obligation, even when it's something he actually wants to do. He estimated that he's spent thousands of dollars on therapy over the past few decades. "I don't think it's fair that I've had to pay for all of that," he said. "The church owes us atonement."

To make sense of his experiences, Clark, a musician who once ran a karaoke club in Essex Junction, has written three songs about his life at the orphanage, one of which he titled "I Don't Want to Do This." In a more just world, he said, the diocese would buy the rights to all three of his songs, to the tune of $1 million each.

The original print version of this article was headlined "'My Life Was Totally Destroyed' | A new law could empower more St. Joseph's Orphanage survivors to sue, but hurdles remain"