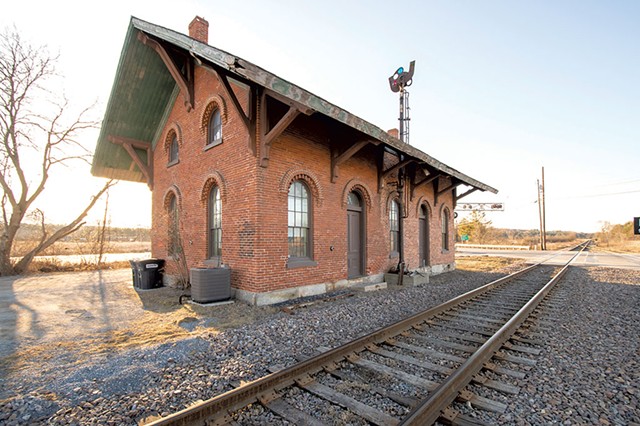 The New Haven Train Depot has long been a monument to the golden age of Vermont railroading. Just yards from Route 7, the 19th-century Italianate brick station is a visual landmark for thousands of passersby every day and serves as a reminder of the bygone era when trains used to shuttle passengers up and down the western side of the state.

But as Vermont prepares to achieve its long-awaited goal of restoring Amtrak service to Burlington, the 170-year-old depot now stands in the way.

Amtrak has deemed the depot a safety risk because it's less than a dozen feet from the tracks and says it must be removed before passenger trains can start heading up to the Queen City. Railroad buffs and local officials have floated numerous alternatives in hopes of keeping the depot in its original place. But the state is adamant: The building must go — and soon.

Determined to preserve the historic depot, New Haven officials are now trying to move it before the end of the year, when Amtrak aims to launch its new service. But where exactly the depot will go, what it will be used for and who will pay for the move remain open questions. Each day without answers brings the depot closer to the wrecking ball.

"We're putting a lot of time and money and effort into getting Amtrak up the western side of the state," Brassard said. "One way or another, we will have the service up and running."

The depot's exact construction date is unclear, but best estimates place it around 1852, not long after the completion of the Rutland and Burlington Railroad. The stop first appeared on timetables for the train service in 1854, and the building's traditional architecture — brick façade, slate gabled roof and round-headed arches atop the windows — suggests a mid-19th-century design, according to architectural historian Charles Ashton, who successfully nominated the depot for the National Register of Historic Places in 1978.

Newspaper archives yield a handful of intriguing mentions of the station, including the 1871 recapture of alleged bank robber and jail escapee Charles Barton. In a first-person account published in the Vermont Watchman, Barton recalled the depot's minor role in his regrettable journey back to imprisonment.

"At three o'clock I was taken to the New Haven depot, one of my hands was hand-cuffed to one of the [police officer's] hands and I was hurried aboard the train, which started at once," Barton said.

Another dramatic report from 1903 featured an oncoming train, a 12-year-old girl and a stuck bicycle. "She paid no attention to the train although the engineer blew the whistle," reads the story from the Middlebury Register. "The people on the depot steps yelled 'jump for your life' and she did jump in time. The cowcatcher to the engine missed her by not over six inches." The bike was not so lucky, landing in a nearby lot, "badly disfigured."

Passenger trains stopped servicing New Haven in 1953, and the depot spent the next two decades without a purpose. In 1975, governor Thomas Salmon transferred its deed to the Vermont Division of Historic Preservation so that the state could create a museum for early American railroad history. When that didn't pan out, New Haven renovated it to house the town offices and the local historical society. But the plan never came to fruition, and the depot sat vacant six more years, until 1986, when the state entered a lease with Roundtree Construction, a company that has occupied the old building ever since.

"If you're really trying to sell Amtrak, having an iconic train station [to pass] just makes sense. The station should be where it is." Ric Santa Maria tweet this

Amtrak took notice of the depot only four or five years ago, when its officials surveyed the proposed line to Burlington and noticed the building's distance from the track: a mere 11 feet.

Amtrak had two main concerns, according to Brassard, the VTrans official. First, it concluded that the building would be at substantial risk in the event of a derailment. Such crashes are rare, but trains have derailed at least twice at the Route 7 crossing. In May 1982, a train carrying coal left the tracks. Six months later, a hurtling train car slammed into the depot, causing extensive damage.

Amtrak's second concern involves visibility: The building prevents train engineers heading south from seeing the Route 7 crossing until they're right on top of it, meaning they have no way to know whether a car is stuck on the tracks. This doesn't appear to have caused major issues for the freight trains that still travel the route at speeds of up to 39 miles per hour. But Brassard said passenger trains will be traveling up to 20 miles per hour faster. When it comes to stopping trains, she said, every second counts.

To be sure, no one is arguing that the train depot's preservation should take precedence over Vermont's long-discussed goal to return Amtrak service to Burlington, particularly given the financial considerations at play. The project's final price tag is expected to eclipse $100 million. Much of that will have been spent on upgrading the tracks between Rutland and Burlington to ensure the latter becomes the new northern terminus of the Ethan Allen Express, which will soon run through Vergennes, Middlebury, Castleton and Rutland en route to New York City.

Nor is anyone saying it would be safe to ignore the problem entirely.

But proponents of keeping the depot on-site believe the state is overlooking viable alternatives, threatening a piece of Vermont history in the process.

"If you're really trying to sell Amtrak, having an iconic train station [to pass] just makes sense," said Ric Santa Maria, owner of Roundtree Construction, who has worked inside the depot for more than three decades. "The station should be where it is."

Those who agree have questioned why Amtrak's trains can't just slow down as they pass the depot. "It would take all of two minutes," said John Christman, a conductor who used to live in Rutland and now resides across the border in Chestertown, N.Y.

Brassard dismissed the idea, saying it doesn't solve the visibility issue. "It will just mean the train will hit [someone] going a little bit slower, but it's still going to hit them," she said.

The state also says that it cannot move the depot back from the track because of environmental concerns with nearby wetlands — a stance that Santa Maria disputes. "There really isn't any distinguishable difference between where the station lives right now and where it could be moved on the lot," he said, noting that the area has been covered with fill for decades. "That, to me, is the biggest misstep and the most unfortunate piece of bureaucracy in this whole thing."

Adding to his frustration is how the state has communicated its decision. Santa Maria said he was told five years ago that the building may have to move eventually. But he only received confirmation of that in January. He's now in the process of relocating Roundtree Construction's offices. "They had their mind made up five years ago," he said. "They just never made it official."

Indeed, while the state has known about Amtrak's stance on the depot for at least several years, the Town of New Haven was apparently in the dark until earlier this year, according to selectboard member Steve Dupoise. He says it would have been far easier to address the problem had the town been given more runway.

"Didn't they think we'd have some concern about them coming in and knocking it down?" he said.

State officials acknowledge a communication breakdown but disagree on who's to blame. Brassard said VTrans notified the Division of Historic Preservation about the problem several years ago and expected that it would handle the public outreach from there. "They probably have a valid complaint there," she said of the town.

Vermont historic preservation officer Laura Trieschmann, however, said she was also waiting on an official determination. "Since I first heard about it unofficially, I have been looking for alternatives and stronger direction from VTrans to be able to go to the town to be able to say, 'Here's the situation,'" she said.

Now fully aware of the predicament, town officials say their chief priority is to keep the depot in New Haven. Dupoise is overseeing a committee dedicated to the issue and said he knows of at least six potential town-owned plots. He said the state should pay for the move.

"We didn't create this problem," he said.

The funding question poses a catch-22, however: The state can only offer financing once it knows what the building will be used for, and the building's use may depend on who foots the bill, with estimates ranging anywhere from $500,000 to more than $1 million.

Yet the equation changes if the town plans to lease it to a commercial venture. And if major alterations are needed to adapt the building for its next use, then the Division of Historic Preservation may be less willing to transfer ownership, Trieschmann said.

If the town decides it can't thread this needle, there's still one last option: Dupoise knows of at least one investor interested in purchasing the depot. But he hasn't "ventured down that road yet."

"I don't want to see it get bought and moved to another town," Dupoise said. "It's New Haven's."

Gov. Phil Scott suspended all passenger rail service in Vermont last March, and officials estimate that Amtrak will need roughly 90 days to resume service once his executive order is lifted. Amtrak has yet to declare a firm launch date for the Burlington service, and the state still has a number of projects to complete this summer, Brassard said.

Asked for a drop-dead date to remove the depot, Brassard said it all depends on when Amtrak is ready to go.

"I don't care if they're moving the last pieces of it the day before service starts," she said. "As long as it's gone."