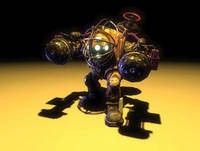 “BioShock” producer Ken Levine thinks he has a winner.

At the end of a jaw-dropping demonstration of the game’s laundry list of features at the Electronic Entertainment Expo this summer, he asked a roomful of journalists if there were any questions.

“Uh, is there anything you left out of this game?”

Without missing a beat, he cracked: “Kart racing. We’ll have that in ‘BioShock 2.’”

Taking a first-person shooter past the next level, “BioShock” includes the sort of character customization and deep story line that gamers associate with role-playing titles like “Final Fantasy” and drops the whole thing in the drink, setting the action in a retro undersea city. True to the genre’s conventions, players find themselves submerged in kill-or-be-killed explorations of Rapture — a submarine city that was built as an industrialist’s utopia but ended up a soggy hell.

Perfection gone wrong counts as a well-worn science-fiction theme. We love those egghead, rational-humanist scientists who create worlds filled with food pills and flying cars, but we also relish the consequences of technological hubris. As Icarus could tell you, pride always comes before a fall into the ocean. In the case of “BioShock,” the tumble starts in the water with an Ayn Rand-like backstory about a mad visionary who will not submit to God or man, instead building his empire under the sea.

Freed from common morality in a way that would make Nietzsche giddy, Andrew Ryan (a thinly disguised stand-in for Rand) erects a magnificent art-deco metropolis that should stand as a beacon to the ages. Unfortunately, that beacon ends up as a metaphorical lighthouse in a stormy sea, offering the player refuge after a game-opening mid-ocean plane disaster.

In what must rank as one of video-gamedom’s most compressed and elegant introductions to a game narrative, you learn of Ryan’s desire to build a new order of the ages and his obvious folly in challenging Mother Nature. You arrive in the underwater paradise and rapidly encounter murder, savage attacks from mutants with scythes, a genetic possession and the radioed pleas of hapless Rapture residents asking you to help them save their families. A quick glimpse out the porthole reveals the deeper irony. As blue whales swim peacefully past what could only be described as a 1930s version of Atlantis, the player must contend with waterlogged interiors, smoldering fires in corridors and the threat of lunatics with knives.

Something has gone terribly wrong, and it doesn’t take a lot of imagination to figure out that the residents had it coming. But what happened — and how do you live long enough to find out?

By the time you’ve wound your way through the elaborate settings and twisting narrative to the conclusion, you’ll be hungry for “BioShock 2.” And kart racing.

Who's It For: With strong story elements and a forgiving combat system, "BioShock" is "Half-Life" for the rest of us.

If You Like This, Try That: "BioShock" is one of the first games on the new generation of consoles really to take advantage of high-end graphics and the potential for an involved story to occur across large environments and still leave enough computing power to put some smarts in the enemies. Expect more of the same in the future. For now, "Half-Life 2" will please, or you can wait until the November release of "Halo 3."

Best Part: Whether it's jukeboxes playing big-band music in the background, the occasional chatter of radio communication or eerie catcalls from the evil enemy "slicers," "BioShock" supplements a visual feast with some of the best game audio of the year.