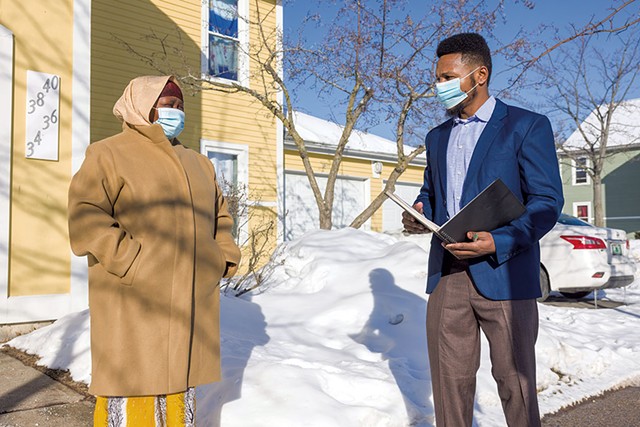 There's no concise job description for Noor Bulle's work in Burlington schools. As one of the district's 11 multilingual liaisons, Bulle is part of a team that helps families with limited English proficiency navigate the school system and engage in their children's education.

The 2008 Burlington High School graduate, who speaks both Somali and Maay Maay, works with New American families whose children attend the high school, Champlain Elementary School and Ira Allen Early Education Center. Depending on the day, he might translate during a meeting about a child's schoolwork, help parents understand a report card or newsletter, convey important information from the superintendent, or assist families with bills or paperwork.

His assignments come in through a steady stream of help desk tickets submitted by school staff, as well as parents who reach out directly. He communicates with families through phone calls, messaging apps and socially distanced home visits, sometimes held outside.

During the pandemic, Bulle said, it feels as if his job responsibilities have tripled due to the challenges posed by remote learning, including complicated class schedules and internet connectivity issues.

Though the liaisons' role is critical — around 16 percent of the Burlington School District's approximately 3,340 students receive English language learning services, and even more have parents who don't speak English proficiently — their work often happens behind the scenes.

"Sometimes I just feel like we're invisible," Bulle said. "We want people to know we exist in the school district."

Officials at the state and local level appear to be taking notice. A bill pending in the legislature would give municipalities and school districts the ability to share the costs of the multilingual workers. And on Town Meeting Day, residents in both Burlington and Winooski will vote on school budgets that include additional money for their liaison programs. Some of the money would be used to pay the employees year-round.

The job goes "all year long," explained Bulle. "It's just that our pay stops."

The Burlington School District has included an extra $120,000 to support multilingual families in its proposed $95.1 million budget for the next fiscal year. The line item, much of which would fund liaisons, is one of just a few proposed spending increases and speaks to the district's commitment to equity, said English language programs director Miriam Ehtesham-Cating.

The money is a recognition of the need with "an eye to expanding and enhancing" the liaison program, Ehtesham-Cating said. "Being able to have genuine engagement and people [having] access to information no matter what language you speak or where you came from," she said, "it benefits everyone in the entire community."

"Without [liaisons], the district would fall apart. It's as simple as that." Aden Haji tweet this

Liaisons are "the consummate multitaskers," according to Ehtesham-Cating. They're effective because they've earned the trust of the families they assist.

"They are the people who [families] would call if they were in a jam ... about almost any issue in their lives," she said. That means that the liaisons' work often "spills over beyond their contractual hours."

Burlington School District Commissioner Aden Haji supports the investment. Like Bulle, Haji is a member of the Somali Bantu community and moved to Vermont in the early 2000s from a refugee camp in Kenya. He said his parents have benefited from working with a liaison, both when he was growing up and now as his younger siblings are.

Liaisons act not just as translators, but as counselors and tutors, said Haji. "Without them, the district would fall apart," he said. "It's as simple as that."

Winooski, too, leans heavily on its six liaisons. The employees work with about half of its approximately 800 students and their families. Tul Niroula, the Nepali Bhutanese community liaison, serves the families of 124 students himself, including during the summer, according to the district.

Last year, the Winooski School District paid liaisons for summer help using federal COVID-19 relief funds, communications director Emily Hecker said. Winooski's proposed $19.5 million school budget for the next fiscal year includes an additional $60,000 for the liaison program, some of which would go to fund their work this summer or hire additional staff.

Sen. Kesha Ram (D-Chittenden) hopes a bill she introduced in January will make it easier for districts to pay liaisons in the future. S.27 would allow municipalities to pitch in on the costs, an acknowledgment that the school employees are integral to the entire community, she said. Ram was inspired by work she did in Winooski as a consultant focused on equity and inclusion.

They are "some of the most well-respected leaders," she said, who "work tirelessly to provide accurate and quality information and support to families who otherwise don't have much of a lifeline to local and state services."

Currently, Ram explained, the state's education funding formula restricts municipalities from funding schools because of the potential for creating inequities between communities.

"One municipality could say, 'Well, we'll pick up the tab on the soccer field or this particular program ... and that leaves other schools at a disadvantage," Ram explained. "Given that, any municipality or district is going to be very wary of running afoul of that."

Ram's bill would allow districts to bypass this restriction.

Winooski city and school district leaders prioritized jointly funding liaisons after a 2018 summit on inequity and other issues facing the city. Some of a $300,000 grant that the Federal Reserve Bank of Boston awarded the Onion City last November could go to the program.

In testimony to the Senate Education Committee on February 5, Winooski City Manager Jessie Baker expressed her support for S.27. A partnership between the city and school district to fund liaisons, she said, would enable Winooski to provide services more efficiently, create livable-wage jobs and allow for the expansion of liaisons to full-year positions.

Ram said she's hopeful the measure will pass, noting that it's sometimes easier to get support for a bill that doesn't have an appropriation attached to it. It's currently before the Senate Education Committee.

"This is a way for us to acknowledge that these liaisons could be providing life-saving and critical municipal information" but are sometimes constrained by their school-related work, Ram said.

The Winooski School District supports Ram's bill, as well, communications director Hecker said, "because it would provide much-needed flexibility to employ and fund cultural liaisons across our city."

Ehtesham-Cating said the Burlington School District has also begun "preliminary" conversations with city officials about sharing funding for the liaisons. She said she is supportive of the idea but has some concerns that they'll be asked to take on additional duties on top of their already packed schedules. There would have to be "clear and frank discussion" around the parameters of the liaisons' work if the positions were to be jointly funded, she said.

In the almost six years she's worked in the district, Ehtesham-Cating said, she's been approached by various organizations asking for liaisons' help with community initiatives, including lead abatement, voter registration and census taking. She said one of her professional struggles is making sure the liaisons are not stretched too thin.

"They are extraordinary," Ehtesham-Cating said. "They are well trained; they are professional; their confidentiality is beyond reproach; they're multilingual; and you can count on them — so everybody wants a piece."