New Frameworks Constructs Healthier Environments — in the Workplace and Beyond 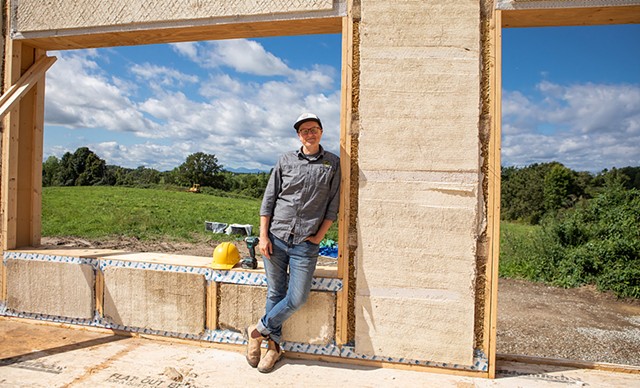 Ayla and Brandon Bless were watching the sun set on a recent evening at a construction site in Shelburne. The project is an addition to their house at Bread & Butter Farm, where Brandon is animal and land manager.

Standing inside the building-in-progress, young Ayla asked her father when she could help. He told her she'd be part of the plastering team, using a trowel to apply a finish plaster made of local lime, sand and manure.

"It's simple. We can make that plaster ourselves," Bless, 38, explained to a reporter. "It's fairly easy to learn how to do. I'm going to have my 3-year-old daughter help. It's a giant, building-sized art project."

To construct the addition's walls, on which that DIY plaster will go, the Blesses are counting on an Essex Junction design-build company called New Frameworks, which specializes in natural and local materials. A vital part of its mission is to "draw down" carbon — or reverse emissions — in its projects.

"Climate justice and climate response is not a theory to us; it's a practice," Ace McArleton, who cofounded the company in 2006, said in a phone interview. "And we wake up every day knowing that every action we take within New Frameworks is informed by that."

"It's kind of the holy grail of a wall system, in so many different ways," Bless said of the straw-bale panels, which New Frameworks designed for use in a variety of its building projects.

Using a plant-based material such as straw in construction can be environmentally beneficial because it stores carbon from the atmosphere. The agricultural by-product also contains less embodied energy than other kinds of insulation, meaning less energy is used to produce it. The carbon footprint is further reduced if it's a locally sourced product that travels a relatively short distance for use in building.

The prefab wall panels are just one of the services and products New Frameworks offers. The company, which is booking into 2023, works with residential and commercial clients on projects including renovation, new construction and improving building performance in existing structures. The latter effort requires an analysis of how air, moisture and heat move in a building, McArleton said.

"We ask, 'How is this building working?'" he explained. "'What are its best areas and areas that need work? And how do you do that using materials that are low-carbon and nontoxic?'"

McArleton, 44, cofounded the company in 2006 with Chloe Jhangiani, who is now a social worker in California. Jacob Deva Racusin, who directed the natural building certificate program at Yestermorrow Design/Build School in Waitsfield, joined New Frameworks in 2009. He and McArleton wrote a book together called The Natural Building Companion. Racusin and several other members of the team share the title of cofounder.

In addition to its commitment to natural materials and, as McArleton puts it, "their effective use in our climate," New Frameworks is committed to workplace equity and social justice. From the start, a primary aim of the company has been hiring and training transgender people, gender-nonconforming folks, people of color and women, said McArleton, who identifies as trans.

"Representation and presence in the building trades is a difficult thing for anybody who's not a white, able-bodied, cisgender dude," he said.

McArleton grew up in suburban Chicago and Ann Arbor, Mich. He studied environmental science with a focus in chemistry at Antioch College in Yellow Springs, Ohio. He developed a particular interest in toxins, especially following a visit with the Environmental Field Program to Love Canal, the site of a 1970s environmental disaster in Niagara Falls, N.Y.

He walked through the neighborhood with a "former resident-turned-activist, a mom whose kids got sick, and one who died, due to the toxic chemical exposure," McArleton wrote in an email. "Her passion and loss fueled me to want to fight for ecological and social justice, and to see how those were intertwined."

McArleton moved to California's Bay Area when he was 21, "partly because I was coming out as a transgender butch," he said.

He saw a flyer for a job as a tile-setter with a small, woman-run company. He had the required truck, and the owner was paying $15 an hour.

"I called her, and she said, 'Come on over,'" McArleton said.

He learned the basics of the building trades, starting with how to change a blade on a utility knife. After a time, he moved on to doing tile work for union jobs and became a masonry apprentice on the construction of a multiuse office building in Oakland.

He loved the work — but he was scared to go to the job site every morning.

"There was a lot of drug use, a lot of swearing, a lot of anger and violence," McArleton recalled. "That was the norm ... I firmly believe that toxic white masculinity is harmful for everyone."

The experience was conflicting for McArleton. "I came away from that seeing that the trades are so beautiful, and there's so much potential because it is so creative," he said. "And it broke my heart to see the way in which social violence that is normalized within the trades gets in the way of the enjoyment of the craft."

McArleton moved to Vermont in 2002 to attend the Institute for Social Ecology in Plainfield. He held various jobs — including bartending and installing ventilation systems — before starting New Frameworks four years later.

The company has undergone several iterations. It's now an employee-owned business whose team members, including former farmworkers, speak both Spanish and English on worksites to the best of their abilities.

New Frameworks is developing prototypes for on-farm housing for migrant workers — and seeking design input from the people who will live there. The homes will have the same straw-bale panels that Bless is using. And, if they use a similar plaster mixture in the construction, there will be plenty of manure available.

Enzymes in the manure have a strengthening effect on the lime in the mix, according to McArleton. This type of knowledge about natural material, and its application to construction, is what sets New Frameworks apart.

"A huge part of our work has been investing our time and money into R&D to prove the efficacy of these materials in this climate," McArleton said. "We're not just interested in doing hippie shit. I want something that's actually going to be effective."