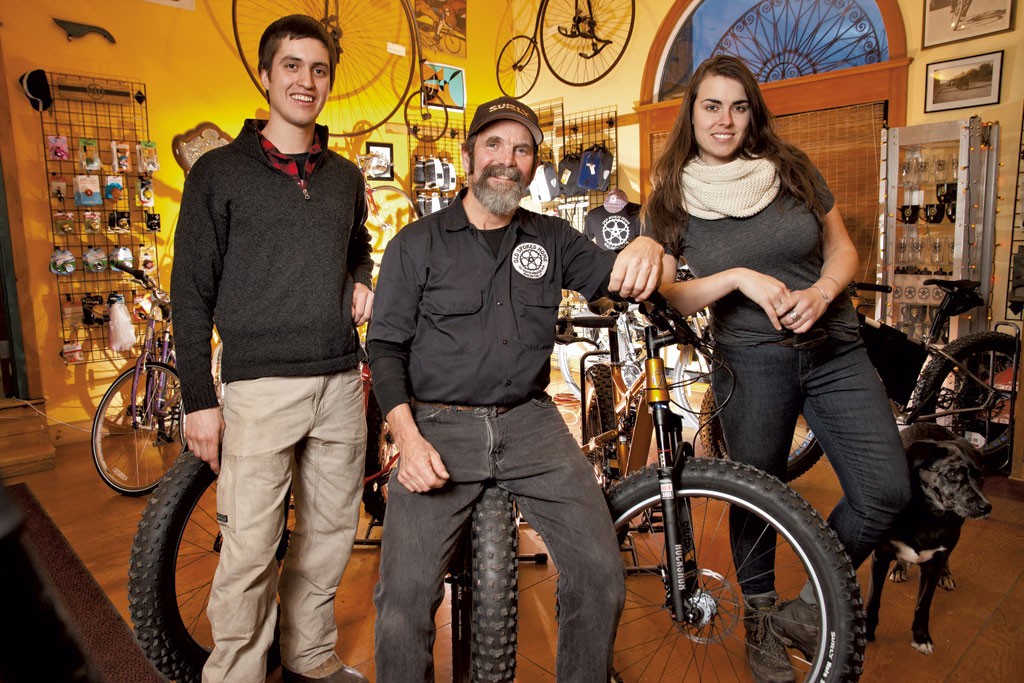 The owner of Burlington's Old Spokes Home was worried when Bike Recycle Vermont moved into a basement across the street. How could two bike shops, just 160 yards apart, survive? Glenn Eames and Bike Recycle founder Ron Manganiello made a deal: Bike Recycle, which refurbishes and sells old bikes, would only cater to very low-income Burlingtonians who qualify for public assistance, while Old Spokes would continue to peddle and repair used bikes for everybody else.

Ten years later, that gentlemen's agreement has turned into a merger. On Monday, Bike Recycle Vermont — a shoestring outfit with one paid staffer and a $67,000 budget — bought Eames' for-profit bike shop on the other side of North Winooski Avenue. Revenue and personnel from the Old Spokes retail operation will allow Bike Recycle Vermont to better serve its clientele with longer hours, more mechanics and regular repair classes.

Eames, a sprightly guy with sideburns and a silver-flecked beard, started Old Spokes Home 15 years ago in what used to be a cold storage building in Burlington's Old North End. He has kept his operation simple, selling basic and vintage accessories and bikes both used and new. The shop offers bike clinics — on topics like commuting in the winter and repair 101 for women and trans people — that work toward Eames' larger goal of creating a "cultural center" for cycling. Eames' collection of antique bicycles is on display in a museum above the shop.

Old Spokes Home cultivated a loyal following of "adventure cyclists and commuters," according to Eames, who is both. That morning, the 62-year-old biked to work in below-zero weather.

Eames made it clear he is not retiring, but said he wants to try new challenges while he's still spry. Among his goals: a bike trip around South America.

He hired local broker Lynne Silva to quietly contact potential buyers and list the business without revealing its identity. That can be tricky, Silva noted, in a small market like Vermont. Plenty of potential buyers lined up, according to Eames, and he also received a "lucrative" offer to establish a multistate bike-store chain. But Eames held out for an opportunity that better matched his philosophy. "It has never been my mission to accumulate more wealth," he explained.

The same can be said of the venture across the street. Bike Recycle Vermont was born when Manganiello stumbled across an online posting — before Front Porch Forum or craigslist existed — from Lauren Berrizbeitia, a local psychotherapist seeking a bike for a Somali refugee. Manganiello offered up a recently deceased neighbor's three-speed that he salvaged from a dumpster.

With help from friends, Manganiello and Berrizbeitia started amassing abandoned bikes in his kitchen-size backyard and giving them away to refugee families, many of whom hail from places where bikes are the most common mode of transportation. Manganiello recalled one of Bike Recycle's early customers, an East African refugee who worked as a translator and walked to his appointments. "His business doubled when he got a bike," Manganiello recalled. "That was the first time I saw the clear economic impact."

The operation later merged with the bike nonprofit Local Motion and moved into the basement of Good News Garage, near the corner of Riverside and North Winooski avenues.

Bike Recycle has never wanted for wheels. The shop, which smells strongly of rubber, is crammed with bikes on hooks and milk crates full of spare pedals, brakes and spindles. Donations range in value from fixable old clunkers to $3,000 models — the pricier ones are sold to the highest bidder on craigslist as part of a non-compete deal with Eames. But the organization is more than a cut-rate bike shop. In the warmer months a steady stream of people show up — to buy a bike or to learn how to repair one — including at-risk high school students and former prisoners.

"It can get pretty wild in there," Manganiello said. "People start piling up."

"This place is a living room for the Old North End," said Yiota Ahladas, who started tinkering on bikes there after a disability forced her to retire early from a job at Burlington's Community & Economic Development Office in 2010. Though she proved to be a "really bad mechanic," Ahladas said, working there gave her renewed purpose. Now she helps the organization raise money on a "low-bono" basis.

Dan Hock, 28, and Christine Hill, 25, began volunteering at Bike Recycle while attending Saint Michael's College and the University of Vermont, respectively. Now they run the operation, with help from Manganiello and what they describe as a melting pot of volunteers.

Hock, who previously worked for five years as an Old Spokes Home mechanic, played matchmaker between the neighboring bike shops. Soft-spoken and clean-cut aside from his grease-stained white pants, he recalled his pitch to Eames late last summer: When people donated expensive rides to Bike Recycle, they could sell them at Old Spokes. During the winter, when work is slow for Old Spokes mechanics, they could cross the street and help teach classes or chip away at the rows of bicycles awaiting repair. In other words, the for-profit shop could provide money and manpower to bankroll Bike Recycle's social mission.

Eames, who had toyed with the idea in the past, was on board. Manganiello was sold, too. "It's been the best thing I've ever done in my life to get this thing rolling and to just stay on the ride," he said.

The group settled on a price and devised a plan: Bike Recycle would part ways with Local Motion and become an independent nonprofit, run by Hill and Hock. Manganiello would serve on the board. Eames would stick around for a year to advise them, and likely even longer as an employee.

For Bike Recycle, it felt like a coup. "He could sell to anybody he wants, and he's sticking his neck out to sell his legacy to a very funky, volunteer-driven nonprofit run out of a basement," Ahladas said.

Meanwhile, the very funky, volunteer-driven nonprofit had to find roughly half a million dollars to seal the deal. Bike Recycle cranks out up to 500 bikes a year, selling them for $15 to $150 to people at or below the poverty line. With the help of grants, it barely breaks even, according to Local Motion executive director Emily Boedecker.

A public fundraising campaign was out of the question for fear that premature rumors of a sale might hurt business at Old Spokes Home.

Despite being intimidated by the prospect of asking people for money, Manganiello picked up the phone. With help from Ahladas, Hock and others, the group raised $200,000 — mainly from people who volunteer at the shop. "A lot of our volunteers who are tooling on bikes here once a week are the same people who are stepping up to the plate and donating large amounts of money to make this happen," said Ahladas. Low-interest bridge loans from individuals are also part of the financing arrangement that led to Monday's closing. The two businesses will remain in their current locations.

The Old North End has become a biking mecca. More than 8 percent of its residents commute by bicycle, compared to 5.5 percent citywide, according to a recent American Community Survey. Boedecker credits Old Spokes Home and Bike Recycle with providing affordable transportation solutions for its diverse and financially challenged population. The survey found that ONE neighborhoods have among the highest percentage of people living below the poverty line in Vermont.

When Rob Connor was released from his three-year jail sentence, his parole officer suggested he volunteer at Bike Recycle. Connor followed the advice and ended up working there for up to 30 hours a week, according to Hock.

Connor credits the place with helping him readjust to life on the outside and cope with severe depression and anxiety. In August, the 47-year-old flew to the Virgin Islands with one checked item — the SCOTT Sub 20 bike he purchased from Bike Recycle. He's been following the merger effort from afar. "They don't just fix bikes," said Connor. "They're building a community."