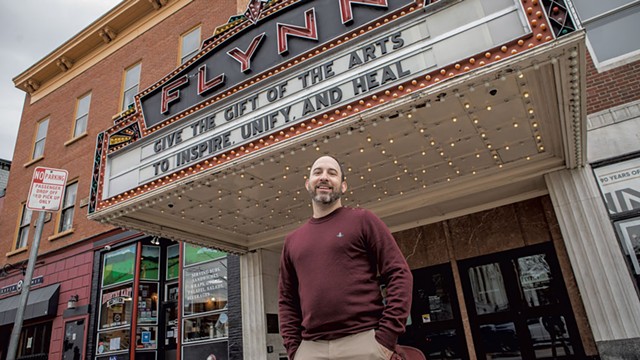 In September, Jay Wahl and his partner took a six-week vacation near Maine's Acadia National Park. They hadn't left their Philadelphia home in six months. As he unwound amid the rugged splendor of the Bold Coast, he frequently wondered, Could I live here? For Wahl, "here" meant not just Downeast Maine, but New England generally. He's about to find out.

Shortly after Wahl returned to Philly in October, the Flynn offered him its executive director position and, with it, an opportunity to move to Burlington. Accepting meant not only leaving the city but also ending his 11-year tenure at Philadelphia's Kimmel Center for the Performing Arts, where he'd served as producing artistic director. Wahl's hiring was announced on December 21, and he officially became the head of Vermont's largest performing arts organization on January 1.

Wahl takes the reins of the Flynn at a time of profound uncertainty for the organization and the performing arts at large. Due to the pandemic, the nonprofit hasn't hosted a show at either Flynn Main Stage or Flynn Space since March — the same month it laid off 12 employees. Interim executive director Charlie Smith, who helmed the Flynn through nearly all of 2020 after Anna Marie Gewirtz abruptly left the position in January, proved a steady hand — he earned an "A-plus" grade for his stewardship from Flynn board chair Staige Davis. Still, profound questions remain at the art-deco theater on Main Street — not the least of which are when the curtains might rise again and what happens in the meantime.

"The pressure I feel is doing honor to the legacy of the organization." Jay Wahl tweet this

Despite these challenges, there is optimism and excitement among Flynn staff and its board that Wahl, whose Kimmel Center tenure was highlighted by his unconventional approach to production, is precisely whom the Flynn needs. The organization chose him unanimously from more than 100 applicants.

"We felt that his experience and his creativity were far and above the rest of the candidates," Davis said of Wahl in December.

Seven Days recently spoke with Wahl by phone about the role of arts in the community, stability at the Flynn and the challenges facing the organization in 2021.

SEVEN DAYS: What drew you to the Flynn?

JAY WAHL: I think the Flynn has a real grounded sensibility around what artistic practice does for a community and how it brings people together, how it lifts up certain voices and addresses social injustice. And that grounding is very important to me, and I very much feel a kinship to that.

One of the ways in which that activates itself is through real education through the arts, so the fact that the Flynn is in schools in 10 different counties, the fact that they're teaching classes to people with Parkinson's, that they're teaching tap dance and burlesque online — they've really thought deeply about the ways that arts education helps us find ourselves and put that into practice.

SD: Do you feel pressure to bring stability to leadership at the Flynn?

JW: No. I feel like the team is really strong. These are smart, deep-hearted, brave people. So I think the goal is to jump in and be part of that and help everybody feel proud of that work.

I think leadership at the Flynn has been very strong for a very long time. The executive director is an important person, perhaps, but one of a big team. And the team has been very stable and very loyal. I feel like I'm joining a stable organization. So the pressure I feel is doing honor to the legacy of the organization.

SD: What is the biggest challenge currently facing the Flynn?

JW: How do we continue to create meaningful experiences that are trans-formative in people's lives? The things that people need physically and emotionally, the things they're curious about, the ways in which they connect to their family and themselves — those things have changed. Now, I don't know how permanently they've changed and, of course, it's different for everybody — it's very personal. And I think artistic practice is about how we unlock those personal experiences in meaningful ways.

So I think the challenge is to try to understand the questions people have and how we best provide gateways for people to explore that with themselves, with each other, with their neighbors, with people who think differently, people they may not have encountered before — these are all things that the congregational ability of the Flynn can do.

SD: But that assumes an ability to congregate.

JW: And so the challenge is just that, right? Where do people want to convene? How eager are they to get together in person? How eager are they to stay on Zoom? How much do people want to convene digitally versus physically versus [as a] collective subconscious? There's a feeling about what it means to be connected to an arts event, to what it means to be living in Burlington. How does the Flynn help to be part of that collective spirit?

One of the ways I see the Flynn tap into that collective spirit is through its marquee. It sort of sends out these messages that are meant to spark thought as people move about their lives in Burlington.

SD: Are those necessarily pandemic-specific questions?

JW: So the challenges are: What are performing arts spaces in the future? How much is the old model of expecting everyone to come to one location going to hold? How much is the Flynn more of an ideal that has to go to where people are? How reasonable is it for us to keep that old model? What responsibility do we have to reach people who have different access abilities? And I mean that in all the different ways you can mean that.

Those are pandemic-specific questions in the sense that the ways we ask those questions and think about them have shifted. But they're also the questions we always ask as people who practice the idea that art is a transformative experience.