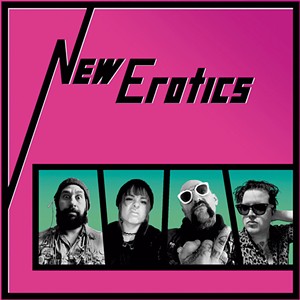 Leaning hard into the synth-ified sounds of the '80s, the group delivers an incredibly solid first entry on its self-titled, four-song debut EP. In an email, Lander wrote that inspiration came from mainstays of the decade, such as Missing Persons and Berlin. He also noted that the kind of synth-punk New Erotics play — full of flashy hooks both vocal and synth-strumental — also enjoyed a brief revival in the early to mid-aughts through bands such as the Faint and the Sounds.

Opener "Thicc Thighs," an unambiguous celebration of body positivity, showcases Henri's prickly, juiced-up vocals crackling between Denning's stiff peaks of guitar. "No I don't count the pounds / I count my lucky stars," they sing while reveling in the presence of a "well-fed femme."

Trading pinched yelps for a more melodic approach, Henri, a cofounder of the local sex workers' support organization the Ishtar Collective, croons about resilience and inner strength on "Roses on a Grave." Lander, Denning and Tav create a punctuated wall of sound, their instruments (synths/drum programming, guitar and bass, respectively) forming a tight lattice.

Pulling no punches, "Out of Time (Guano)" is a withering indictment of fuckbois the world over. After parroting excuses that enablers always give ("But he's such a nice guy / He's in such a good band"), Henri calls out bullshit left and right. A rousing call-and-response invigorates the zippy tune.

Accentuating their words like a hammer pounding a nail, Henri clinches the EP with some serious zest on closer "Spin Cycle." Its anthemic chorus draws strength from its simplicity and elegance, riding an ascendant "la la la" to penthouse heights.

Consider New Erotics like a free sample. The EP is just enough to pique listeners' curiosity, grab their attention and make them sweat while they wait for the inevitable forthcoming full-length — which, according to Lander, should arrive "within the year."

New Erotics is available at newerotics.bandcamp.com.