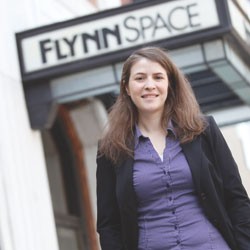 One of the most highly anticipated dramas in Vermont Stage Company’s upcoming season isn’t a play at all. It’s the debut of newly hired producing artistic director Cristina Alicea. Originally from Arlington, Va., Alicea succeeded Mark Nash following the 2010-2011 season, when he ended his 10-year run at the VSC helm.

In these lean times for nonprofit arts organizations, Alicea, 32, faces challenges on several fronts. Her résumé depicts a theater professional with solid artistic and administrative credentials. Most recently, she worked as assistant to the managing director of Woolly Mammoth Theatre Company in Washington, D.C., following nine years of directing plays and working with theater-arts organizations in New York City. Seven Days sat down with Alicea to talk about the new season — presented under the theme of “Reinvention” — and her strategy for carrying VSC forward.

SEVEN DAYS: Why did you choose “Reinvention” as the new season’s theme?

CRISTINA ALICEA: It’s a way to tee up conversation and, especially for our subscribers, it’s a through line they can latch on to. It can deepen the dialogue between the audience members that are seeing each play in sequence, and it helps clarify the arc of each story, as well… What’s so interesting is that Mark and I built this season together, and the theme emerged after all the plays were chosen I noticed that they had these commonalities: They all had female protagonists struggling to find a greater purpose and perhaps reinvigorate their lives and figure out who they are again. So the theme just happened naturally, and I thought it echoed what’s happening with [VSC], with the change of leadership and with myself.

SD: What sold you on Vermont and Vermont Stage Company?

CA: The sense of community. I love the fact that it’s not a huge city. I’m coming to a smaller city, but [one] with a wealth of culture and education and life. I’m still surprised at how lively it is. That was a real pull for me. For my own career arc, I was feeling like I wanted to have a deeper relationship with my community and bridge the gap between the work we’re doing onstage and my effect on the community. I was really excited when [VSC] offered me the position because I thought this was someplace where I could really involve myself on a level that I’ve always wanted to.

SD: What are some of the qualities of Vermont Stage that you’re intent on preserving?

CA: I haven’t had a lot of experience with the audience — I’ve seen a few shows — but I love the environment that Mark created, the sense of community. The audience is devoted to what’s being done. I want to make sure that I maintain that level of work, artistically.

SD: Artistically, do you see new directions in which you’d like to take the company?

CA: I want to work more with New England-based writers. I’d love to develop some kind of program where I’m taking submissions from writers based in this region and telling stories of people in this region and, eventually, maybe produce one play in the season from that body of submissions. That’s an idea I’ve had since before I got this job, that I was talking to the board about. And I want to embrace the local community of actors and artists. For Photograph 51, we managed to cast the whole show locally. I really want to do that more and more, as much as we can.

SD: What, if anything, surprised you about your new community or your position?

CA: Well, I haven’t experienced the winter yet, so I think that perhaps will be the big surprise. I came here with an open mind as to what to expect. So I haven’t necessarily been surprised, because I didn’t put any barriers up to break down. But I haven’t been here a year yet. Ask me this question in the spring. I’m not going to get a car. I want to experience a walking life here for this first year.

SD: Did you choose the plays in the upcoming season because of their female protagonists?

CA: No, not at all. Mark actually had a lot of these in mind. The Clean House was something that I had a strong sense for and wanted to bring into the season, mostly because I’m going to be directing it, as well. Mark and I were reading plays and picked stuff that we really were drawn to, and it was an equal decision as to what we’re going to do. It just happened to be that the plays all had female leads.

CA: I have a balanced experience base both artistically and administratively, and that’s something that the board saw in me. That’s something I’ve been working really hard [to develop] over the course of my career — making sure that the knowledge and experience that I have as an artist and as a director is matched with my knowledge of how to administer theater. As a director, you’re automatically a leader on a production, and I think it’s important to know where the money that’s supporting your work is coming from, and how. Part of the reason I went to Woolly Mammoth was basically to learn from the managing director of a $4 million organization so I could really understand how the structure of a big theater works.

SD: Where are the opportunities for growth and development in VSC?

CA: That’s something we’re still exploring. The board and I are working hard at trying to develop a strategic planning process to really set specific goals for the future. At this point, I have basic ideas, but until I hear from the board. [and] the community about their vision for Vermont Stage Company, I don’t want to make too many specific choices.

SD: Do you see your youth as playing any particular role in audience development, your sensibilities about theater or community relationships?

CA: Sure, of course. That’s something I’m hoping will play a really positive role. Just being connected to younger people, what their interests are and what they put their energy toward will help develop our under-40 audience base, which is always the hardest part in development. Also, already, I’ve started building relationships with university professors here, and a few of them have asked me to come and speak to their classes. I guess I would be a good example of someone who is young and has already built a career for myself in the theater. Perhaps I can be a mentor or an inspiration for students looking to build a career in the same vein.

CA: It does. My sister had a bachelorette weekend in July in Nags Head, N.C., and I spent the whole weekend miserable because I didn’t have any of the food [I’d been eating in Burlington]. I realized how much I’d grown to really like Burlington because I was starting to feel like a food snob. I’d become so used to going to City Market and restaurants here, and the food is just so good. A few people were telling me I would experience culture shock coming here, just the extreme difference between the pace in New York [and] D.C. and here, and I didn’t experience that at all. I arrived and felt immediately comfortable, so I guess that’s a sign that I made the right decision. My board has been amazingly supportive and generous with their time and resources. The acting community has really reached out to me. I’m impressed with how kind everyone is, and how open.

Want to see for yourself? Vermont Stage Company’s season opens with Photograph 51 on Wednesday, October 5, at 7:30 p.m. at the FlynnSpace in Burlington. Info, 862-1497.