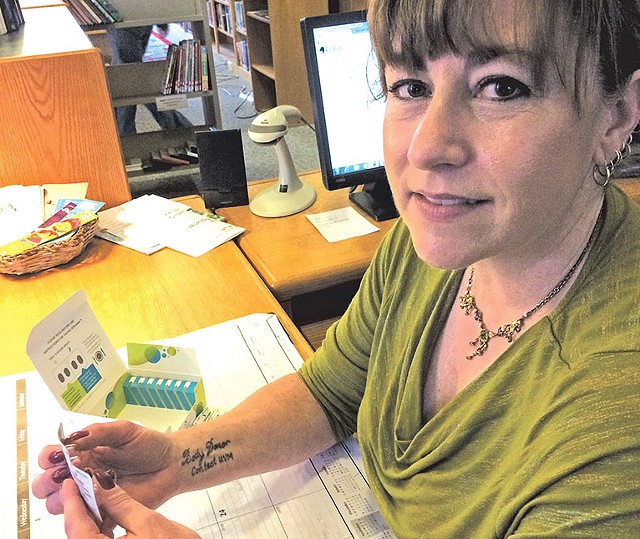 Bridget Huguenin was 13 when she was diagnosed with cystic fibrosis. At the time, people afflicted with the disease weren't expected to live beyond their twenties.

Now 45, she looks younger than her age in a miniskirt, sweater, tights and boots. "I have my life, and cystic fibrosis is something I have to deal with," said Huguenin, who works three and a half days a week at the St. Albans Free Library and the other two days at a dental office.

Cystic fibrosis, caused by a genetic mutation, produces a buildup of thick mucus in the lungs and pancreas, making sufferers susceptible to pulmonary infections and other diseases. Although she shows no overt signs of someone with a chronic disease, Huguenin admitted that her breathing capacity has decreased in recent years, and her purse is full of prescriptions to manage her deteriorating condition.

Among them is Orkambi, a breakthrough cystic fibrosis medication developed by Vertex Pharmaceuticals of Boston. The federal Food and Drug Administration approved it on July 2, and Huguenin started taking it soon thereafter in hopes of extending her life.

The new drug's price, however, is breathtaking. The cost of her daily, four-pill dosage is more than $700. The total cost for a year: $259,000. Huguenin expects to take Orkambi until something better comes along.

Huguenin's drug expenses are covered under Medicaid, the government health insurance program. "If I had to pay a copay or deductible, it would be thousands and thousands of dollars," she said — an expense she can't afford. Under Medicaid, she pays $3 per prescription, which covers a month's worth of medication.

Such expensive drugs are exploding the cost of Vermont's public health programs. In a report to the legislature's Health Reform Oversight Committee in October, the Department of Health said new specialty drugs now account for 16 percent of all pharmaceutical spending — up from 9 percent two years ago.

The Medicaid program is required to cover expensive specialty drugs such as Orkambi, according to Nancy Hogue, pharmacy director at the Department of Vermont Health Access. "But that doesn't mean we can't place utilization limits," she said. For example, the state may require doctors to get prior approval or restrict how long a drug may be used without renewed authorization. Hogue noted, "Cost comes into play when there are multiple options."

Orkambi was tested only in patients who were age 12 or older, so the FDA didn't approve it for use in young children. Vermont Medicaid officials proposed limiting its availability further — to the sickest individuals as determined by a test that compares how forcibly a patient blows out air.

A prominent doctor challenged that recommendation at a recent meeting of Vermont's drug utilization review board, which meets every six weeks to review new drugs and revise treatment guidelines for the hundreds of medications covered by Medicaid. In September, Orkambi came before the group of five doctors, five pharmacists and a nurse practitioner that decides whether medications should be "preferred" in Vermont.

Dr. Thomas Lahiri, director of the cystic fibrosis center at the University of Vermont Medical Center, attended the meeting along with the parent of a child with cystic fibrosis to argue against restricting Orkambi to the sickest patients. "If you can act early and get things corrected before it causes damage," Lahiri predicted, the drug would improve lives and save money on hospitalizations.

Twice a year, patients such as Huguenin go in for "a cleanout," as she puts it, that involves up to two weeks of therapy to loosen the thick mucus that clogs her lungs. The cost of such hospital stays ranges from "$60,000 into the hundreds of thousands," according to Lahiri. He said Orkambi has the potential to reduce hospital visits for the 30 to 40 percent of patients who benefit from the drug.

In response to Lahiri's arguments, the board agreed to expand its eligibility criteria, making it available to an estimated 39 Vermonters.

State officials predict Orkambi will cause a significant spike in Vermont's Medicaid spending — $5 million in the current budget year and $8 million next year, when it will be available for a full 12 months. Federal funds cover about 55 percent of those costs, but the state is on the hook for $2.2 million and $3.6 million respectively, at a time when tax revenues remain flat.

This isn't the first time a new drug has bumped pharmacy expenditures for Medicaid. The program paid $5.8 million last year to provide 70 individuals with Harvoni, a recently developed drug that can cure hepatitis C. The disease infects the liver and may eventually result in scarring or cancer. Many people go years without knowing they are infected. Harvoni received FDA approval in October 2014, and it's now the drug on which Medicaid spends the most in Vermont.

Until 2011, the treatment was primarily interferon, a protein injected to retard reproduction of the hepatitis virus. Dr. Doris Strader, who runs a liver clinic at UVMMC, said it didn't work for everyone and had nasty side effects, including nausea and depression. "Now we have a treatment that can possibly cure it, but a majority of patients can't afford the $85,000 cost," she said of those who are not covered by government programs.

The price of new drugs doesn't just make the state's Medicaid program more expensive. It drives up health care costs for private insurance companies, too. Brian Murphy, pharmacy director at Blue Cross Blue Shield of Vermont, said drugs have typically accounted for 15 percent of total health care expenses, "but because of the growth of specialty drugs, that cost has begun growing."

The high cost of newer drugs used to be offset by the savings from generic drugs, Murphy added, but now the growth in new generics has slowed.

Like the state, Blue Cross establishes rules to ensure that drugs are prescribed appropriately and to influence prescribing practices when cost is a factor. In the case of hepatitis C drugs, Blue Cross has made Viekira, approved after Harvoni, the preferred drug. It costs half as much as Harvoni, according to Murphy. A patient takes five pills a day, compared to one Harvoni daily, during the same three-month course of treatment.

But in the case of Orkambi, "There really isn't another option," Murphy said. Blue Cross covers the cost of Orkambi for six Vermonters with cystic fibrosis.

More specialty drugs are on the way. Murphy said the next breakthrough medication is likely to treat Alzheimer's. He said the FDA has fast-tracked the approval process of a drug that not only seems to slow the disease's progress, but may even reverse some effects. It could be available by 2018. For a drug that promises to attack such a ravaging disease, Murphy asks, "What price are people willing to pay?"

Plenty, apparently. Drug manufacturers defend the high cost of medications, citing the expenses associated with research and clinical trials and the need to educate doctors and patients through advertising. Critics — notably Sen. Bernie Sanders (I-Vt.) — charge that the big drug companies spend more on lobbying and marketing than on research and development. The American Medical Association, which voted two weeks ago to recommend a ban on drug advertising, reported that drug manufacturers spend nearly $5 billion on marketing, up 30 percent from two years ago.

In September, Sanders, a Democratic presidential candidate, introduced a bill that would allow Medicare to negotiate better prices for drugs, allow for importation of cheaper Canadian drugs and ban drug companies with a brand-name medication from paying other companies to delay making a lower-cost generic version.

Huguenin said she used to worry about the cost of her drugs, even though state programs have sheltered her from their enormous expense. She said her doctor had to persuade her to start using one pricey inhaled medication. She participated in the clinical trial of another.

Although she takes a half dozen other meds, Huguenin views astronomically priced Orkambi as her ticket to a future.

"I have been waiting, waiting, because my lung function has been going down," she said. She wants to avoid becoming so sick that she needs an expensive lung transplant — the next course of treatment. "I don't want to get rid of my lungs. They have worked really hard for me for a really long time."