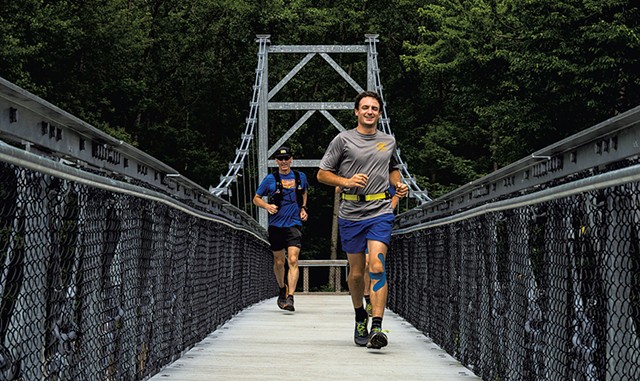 For someone on a "struggle fest," Ben Feinson had a pretty good time. He ate Fritos, peanut M&Ms, and avocado-and-cheese sandwiches and drank beet juice. He hung out with his best friends for four and a half days in mid-July. He slept in the back of a van and received messages of love and encouragement from family and friends.

These activities were a backdrop to — and in support of — the main event: speed-hiking the Long Trail. That was the "struggle fest," in Feinson's words.

"The fact that we got to have this adventure together was my gift to them and their gift to me." Ben Feinson tweet this

A 29-year-old carpenter from Richmond, Feinson completed the 273-mile path in record time last summer: four days, 11 hours and 44 minutes. He bested the previous men's record, set in 2009, by one hour and two minutes.

Feinson's feat is chronicled in a 35-minute documentary, "Supported," produced by crew member Maia Buckingham, a web designer at Gardener's Supply. Viewable on YouTube, the Long Trail documentary is her most ambitious — and widely viewed — film project, she said.

Feinson's achievement is recognized as the fastest known time (FKT) for the Long Trail in the men's "supported" category, which makes it the fastest overall time. Unsupported or self-supported hikes — the other two divisions recognized by Fastest Known Time, the organization that oversees such competitions — take longer.

On a supported hike, Feinson could get food drops, new socks, pacing and other assistance from his crew of friends. But he had to cover every inch of the nation's oldest long-distance hiking path, which traverses Vermont from Canada to Massachusetts and crosses its highest peaks, by the power of his own legs and lungs.

"I wanted to have a fun, interesting experience with my best friends," Feinson said. "The fact that we got to have this adventure together was my gift to them and their gift to me.

"They got to live like dirtbags out in the woods, hiking crazy miles," he continued. "And I got to achieve this really, really big dream of mine — to run the Long Trail really fast — because of their generosity and their enthusiasm."

Feinson hiked in beautiful weather and during a rainstorm on Killington Peak that left him shivering and fearing hypothermia. He slogged through ankle-deep mud for more than a day. He fell asleep standing up.

Traveling north to south, Feinson moved toward Massachusetts for 19 hours out of every 24. Friends took turns hiking with him — efforts that included bringing him emergency dry clothes, feeding him bites of sandwich as he ran and generally cheering him on. They also passed around a GoPro camera to shoot footage for Buckingham's documentary. "For me, the importance [of the film] is telling the full story of Ben's hike," said Buckingham, 29, who grew up in Jeffersonville. "It's so complete. The story's really in the film."

Documenting the hike meant holding the GoPro "like a lollipop with a little tripod" as the cameraperson ran with Feinson, she said. The on-trail scenes were shot by whoever was accompanying Feinson on a particular section of the trail; Buckingham hiked 60 miles with Feinson. She also shot the interviews that are interspersed with action footage, passages that help guide the viewer on Feinson's journey.

"The interesting thing with the GoPro is, it has a really good sensor," Buckingham said. "You don't have to look through it to use it. It almost has a fish-eye lens.''

As "Supported" documents the trajectory of Feinson's trek, its literal and figurative highs and lows, it also depicts a growing trend in long-distance hiking: going fast. 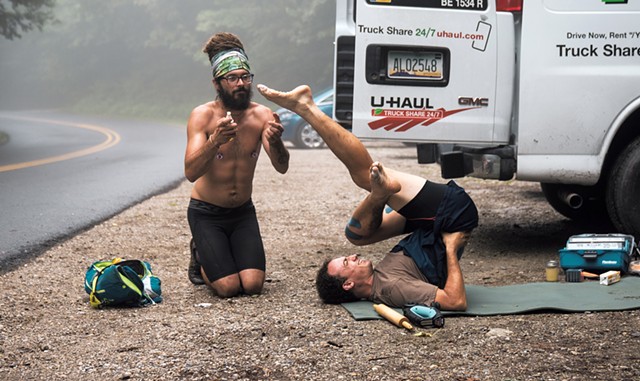 The Green Mountain Club, the nonprofit that manages and stewards the Long Trail, doesn't track or recognize speed-hiking attempts or completions of the path, communications manager Chloe Miller said. Rather, the club records the total number of end-to-end hikes in a year. In 2020, the number hit 555, more than double the average from 2015 to 2019, according to Miller. (The 2021 end-to-end number is not available yet.)

Fastest Known Time sanctions and tracks speed competitions on particular hiking routes around the world, from the U.S. to Europe to New Zealand. In 2021, at least 12 people attempted Long Trail FKTs; that number has typically been in the single digits, Miller said.

Osler wrote an essay about her FKT that appears in the winter issue of the Green Mountain Club's Long Trail News. For the piece, she talked to other athletes who attempted or achieved Long Trail FKTs, including Feinson.

"Everyone I talked to felt a profound connection to the Long Trail," wrote Osler, who currently resides in New Mexico. "Many of us consider Vermont our home, or one of our homes."

Feinson's connection to the Long Trail, to his home state and to the people who live there — especially in Richmond — is clear from Buckingham's film. He talked about those connections with Seven Days, recalling hiking Camel's Hump with his family, running with his marathoner mother and discovering the special joy of the sport on his high school cross-country team.

"Running can be a community effort, and that really stuck with me for my whole life," Feinson said. "Our cross-country team was a vibrant community. While competing, we were supporting and encouraging each other and working as a family."

For the Long Trail hike, one of Feinson's prime crew members was Owen Rachampbell, a friend of his since preschool. The two hiked the Long Trail together in the summer of 2010, after their high school graduation, in the more standard time of three weeks.

Another key hike participant and figure in the documentary is Prem Linskey, whom Feinson befriended about three years ago when they worked together at the Vermont Youth Conservation Corps farm in Richmond.

Linskey's voice is heard in the opening shot of the movie, in the predawn light at the northern terminus of the trail, asking Feinson: "What're you about to go do?"

Feinson, who is looking south, turns to answer his friend: "We're going to hike the Long Trail."

Linskey corrects him. "We're not doing anything," he says. "What are you about to do?"

As crew members laugh in the background, Feinson tries again — but sticks with his plural pronoun. "We're going to hike the Long Trail faster than everybody else," he says. "At least, that's the plan."

Viewers of "Supported" will learn that the plan nearly collapses when Feinson calls it quits near Peru Peak in southern Vermont. He's in pain, overcome with fatigue, in rough shape. The situation seems "irreparable," he tells the camera.

But his friends successfully conspire to urge him on. Watch the movie to see how they accomplish that, but here's a minor spoiler: Resurrection came in the form of community support that Feinson received on the trail via a surprise iPhone recording. The messages from friends and family, including songs sung to him by his sisters, were like a "talisman," Feinson told Seven Days.

"I listened to this recording, and it totally brought my energy back," he said. "It changed everything."

If Feinson's team handed him an emotional lift in the form of an iPhone, physical propulsion was delivered live and in person. His friend Lance Parker, whom he calls "an extremely strong athlete," paced the last section of trail and guided Feinson to a winning finish.

"It was thanks to his skill as a pacer that we got our timing just right," Feinson said. "It was really down to minutes at the end. We could not have gone any slower."