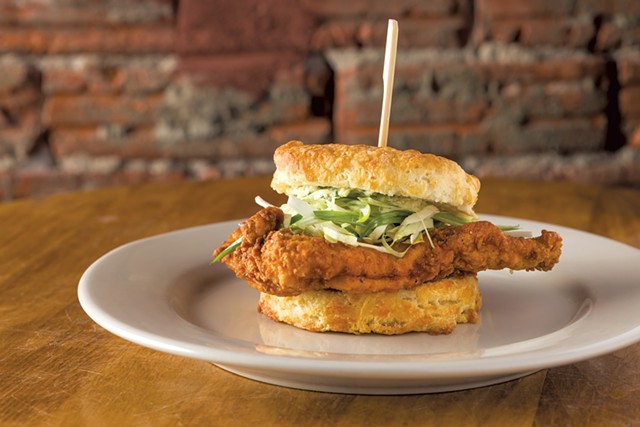 Downtown music destination Nectar's became famous for its early support of Phish back in the 1980s and, to a lesser extent, for its gravy fries. In April, chef Michael Crowell-Hall returned home to Vermont after almost 20 years and quietly took over the night spot's kitchen. He recently debuted a fall menu that balances late-night comfort-food favorites, such as gravy fries and wings, with seasonally inspired creations, such as a deconstructed chili of boneless braised short ribs and heirloom beans.

Crowell-Hall started his culinary career at age 14 as a dishwasher at the now-closed Lincoln Inn in Essex Junction. Now 38, he went on to become an executive chef and consultant, mostly on Cape Cod.

At Nectar's, he will keep the focus on comfort food, Crowell-Hall said, but with an emphasis on fresh ingredients and from-scratch cooking. "We are not trying to put a square peg in a round hole," he said "We should have gravy fries, but we should have good gravy fries."

Nectar's dining room is open Tuesday through Saturday, 5 to 11 p.m., with an abbreviated late-night menu available until at least midnight on Friday and Saturday. That menu includes an item that longtime regulars at Nectar's will recognize as the closest thing to its old-school open-face turkey sandwich: "day-after-Thanksgiving egg rolls" filled with turkey and stuffing and served with cranberry sauce and gravy.

"It's always going to be a music venue. It's legendary. It's Nectar's," Crowell-Hall said. "We hope to make Nectar's a place you go to eat, too."

The original print version of this article was headlined "Gravy Train"