New Chef at Hatchet Tap and Table Is a Cut Above 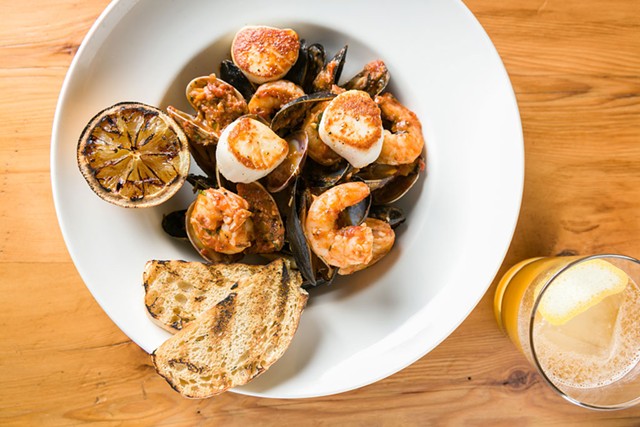 Once Seven Days has reviewed a restaurant, it's not common for us to revisit it. But sometimes a new chef transforms an eatery from a neighborhood standby into a standout, and that's what happened recently at Hatchet Tap and Table in Richmond.

When Hatchet opened in summer 2015, owner Gabriel Firman touted its 24 taps and locally sourced ingredients. In her review that fall, Alice Levitt praised it as a "townie bar" with "well-prepared food" and quirky décor. On the couple of occasions when I dined at Hatchet, I found just what I expected from a small-town restaurant: basic fare (wings, burger, fries, beer) and friendly service. It was a fine place for Route 2 travelers to stop for sustenance, but not a dining destination.

Then, just before the holidays, I started hearing about changes at Hatchet, from both locals and chefs. I went back on a couple of chilly weekday nights.

The wall is still adorned with dozens of wood splitters, and the service is warm and casual. The regular menu is jam-packed with customer favorites: fried chicken niblets, steak, a tempeh sloppy joe, fries and salads. But now there's a chalkboard menu that changes nightly and serves as a playground for Hatchet's new chef, Kevin Sokal. And the food has become worth a drive.

Sokal was on the opening team at Hen of the Wood Burlington, then went to work for "Top Chef" runner-up Richard Blais at Juniper & Ivy in San Diego. Since he joined Team Hatchet in October, he's been quietly ratcheting up the quality of the cuisine.

On a mellow Tuesday, my friend and I started with cocktails created by bar manager Sam Coffey. When a restaurant has good buzz, it can be fun to imbibe and dig into deep conversation for a couple of hours. Since my dining companion was a former bartender, I bowed to his cocktail expertise. He selected the Coladapin, made with coconut cream, pineapple and dark rum and dusted with nutmeg; and the Mez Max, a blend of mezcal, vermouth, St-Germain elderflower liqueur and lemon.

The former was a refreshingly tangy twist on an often-cloying classic. The latter was spectacular. At first sip, the elderflower and lemon rolled around in my mouth in a perfect sweet-sour interplay. The smoke from the mezcal didn't show up until I'd swallowed, but, once it did, it lingered like wood smoke does in your hair after a camping trip.

I was similarly delighted by a serving of homemade pappardelle — a wide, flat pasta — with a rich sauce made from ground pork, mushrooms and crème fraîche. It was hearty, complex and many cuts above the Cold War-era stroganoff I had growing up.

Mushrooms again came into play as a savory purée under a perfectly seared Maple Wind Farm steak. At $27, it was by far the priciest dish on the regular menu, and for good reason: Raising grass-fed beef is a lengthy, expensive matter. The animals take months longer to fatten than their grain-fed counterparts and, no matter the feed, each steer provides only a few steaks.

Chef Sokal was on the opening team at Hen of the Wood Burlington, then went to work for "Top Chef" runner-up Richard Blais at Juniper & Ivy in San Diego. tweet this

Sokal's kitchen gave this one its due. The meat was well seasoned, prepared exactly to the requested medium-rare, and accompanied by smashed fingerling potatoes topped with bacon, sour cream, cheese and scallions — a playful riff on the classic "loaded" baked potato.

The simple descriptions on Hatchet's menus — both the printed regular version and the chalkboard — don't do justice to the quality of the food. Perhaps they don't need to. When the barbecued chicken wings are perfectly crisp and juicy and served with housemade ranch dressing, not much else needs to be said.

That same dressing showed up on the Farmer's Salad, made with glorious gem lettuce, cubes of apple — which added pleasing crunch to every bite — thinly sliced watermelon radish and carrot.

I had that salad on my second visit, accompanied by my sister, who works down the road at Jericho Settlers Farm. "I'm pretty sure those are our radishes," she said as she sampled one. "I've never eaten them like this before." While whole radishes pack a mouthful of heat, she explained, slicing the roots moderates the burn.

In two evenings at Hatchet, I tried only one dish that left me lukewarm: local cheese curds, battered and fried, served with marinara sauce and rings of Castelvetrano olive. The curds were a crispy gold but dense and chewy rather than gooey. The sauce was pleasant but standard. There was nothing wrong with the bites, but I would have preferred to spend the calories on other things.

An appetizer of kung pao cauliflower was more fun. Composed of fried cauliflower doused in a cornstarch-thickened, soy-based sauce, then garnished with scallion and a few pieces of pickled cauliflower for crunch, the veggie plate was flavorful and out of the ordinary.

Wednesday is burger night at Hatchet, so I split the chili burger with my sister. We both noticed that the ketchup was made in-house and the chili beans didn't come from a can. The burger, like the steak, was cooked to exactly the temperature we requested.

The final dish I sampled was a variation on cioppino, a shellfish stew with Italian roots that originated in San Francisco. The shellfish is typically served in a thin tomato-and-wine broth. At Hatchet, the mussels, shrimp, scallops and clams came layered with a thick, ground-pork-laced tomato sauce accompanied by bread for mopping up the bits. A second garnish, perched on the stew, was a grill-marked lemon half, its bite softened just slightly by the heat for a perfect, surprising touch.

Like many rural restaurants with a farm-to-table ethos, Hatchet must ride the line between the affordability that makes locals into regulars and the excitement that attracts out-of-towners. Serving brunch, having a deep draft list and offering innovative cocktails certainly help. Yet keeping things accessible and innovative at the same time can put chefs in a tricky spot.

An approach like Sokal's — playing with classic, familiar preparations — is an apt answer. While Hatchet's regular menu supplies twists on old favorites, the chef uses his ever-changing offerings to highlight seasonal vegetables and meats grown and raised nearby, as well as the best seafood from Wood Mountain Fish. The dual-menu combo allows the restaurant to engage with the best of both worlds.

Each of my meals — including a round of drinks, all the food we could eat and a shared dessert — rang up at about $100 for two. Had I been on a budget, I could have spent closer to $30 per person and been well sated, sans booze. After four visits — two before Sokal's arrival and two since — I can confidently say that, under this chef's direction, Hatchet is getting sharper.