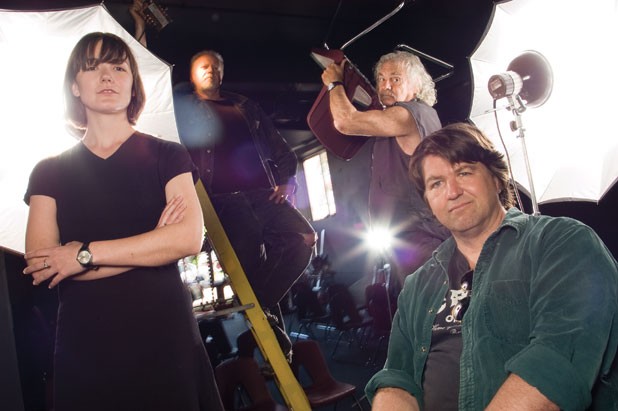 OFF Center for the Dramatic Arts, a brand-new black-box theater in Burlington’s Old North End, will open its doors with the Switch On Theatre Festival June 2 to 5.

Organizer Ben Aleshire says the fest is designed to showcase a crosssection of theater work — underground as well as more established companies. Bread and Puppet’s Lubberland National Dance Company will kick off the festival, and another 15 troupes or local and regional theater performers will fill out the four-night bill.

Founding members of the Off Center — John D. Alexander, Stephen Goldberg, Genevra MacPhail and Paul Schnabel — say the new venue will address the scarcity of affordable performance space in Burlington. Local thespians have long complained about the high cost of mounting shows in professional rooms or performing in spaces designed for other purposes, such as bars and cafés. “If you act in enough places that aren’t meant to be theaters,” Alexander says, “it gives you a drive to make an appropriate space happen.”

This makes the debut of Off Center especially satisfying for Alexander and Schnabel, who opened a performance space under the same name on Church Street in the mid-’90s, only to shut it down after three shows when faced with the cost of required fire-code alterations. From 1996 to ’98, they promoted a plan to convert the then-recently vacated Burlington Police station on South Winooski Avenue. Although the pair received zoning-board approval for that location, city officials designated the lot as the site of a grocery store — the current City Market. Alexander and Schnabel continued to pursue other spaces, but, “When the police station fell through, we both gave up for a while,” Alexander says.

In September 2009, while walking around the Old North End, Schnabel happened upon the large white building on the corner of North Winooski Avenue and Archibald Street. It’s home to a smattering of nonprofits, such as Channel 17 and the Imani Health Institute, as well as a dance studio and Kids on the Block puppet troupe. Schnabel noticed a garage and loading dock facing Archibald and asked building manager Ben Bergstein if it was available to convert into a theater. “He said, ‘Make it happen,’” Schnabel recalls.

Schnabel and company began turning the space into Off Center. It had some distinct advantages: a loading dock that creates a stage, 13-foot ceilings, and a bay that declines slightly for a gentle seating rake. The 1000-square-foot theater can hold 65 audience members. The building offers a sizeable lobby, an accessible bathroom and ample parking.

Off Center’s chief drawback may be its distance from the heart of downtown Burlington — a mere few blocks but, as Bergstein notes, a greater perceived deviation from the more traveled entertainment path.

Off Center’s inaugural season will test its ability to attract ticket buyers. Booked so far are the Switch On festival, a run of Goldberg’s new play Who’s Afraid of Edward Albee? (opening June 16) and a guest run of Freedom Club, jointly produced by Schnabel’s Riot Group and Philadelphia’s New Paradise Laboratories, starting the second week in August.

Box-office receipts aside, theater artists are eagerly anticipating the new room. “The theater energy in Burlington is boiling just under the surface,” Aleshire says. Schnabel concurs: “This has been needed forever.”

The Off Center for the Dramatic Arts is at 294-6 North Winooski Avenue. Info, theoffcenter@gmail.com.