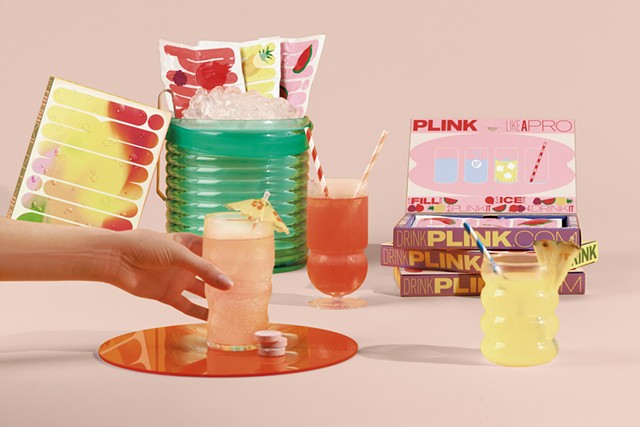 What sound does a drink make? Often, it's the pop of a bottle top or the crack of a can, followed by the hiss of gas rushing out. Now, a new company based at Hula in Burlington is offering a fresh, onomatopoeic answer: Plink!

Cofounders Max Luthy and Luke Montgomery-Smith launched Plink! in May, hitting the direct-to-consumer market with three flavors of effervescent tablets that provide their own soundtrack. On June 16, their "bath bomb you can drink" won the BevNET New Beverage Showdown in New York City.

Plinking takes a touch of DIY: Tear open one of the small packets, grab the pineapple-grapefruit, watermelon or pomegranate-berry tablet and — plink! — drop it into 12 ounces of water. Tiny bubbles immediately fizz up, slowly filling the glass until it turns a bright shade of yellow or pink.

Luthy was working in trends and forecasting — "traveling around the U.S. telling big businesses what the future held," he said — when he started thinking about what his future might hold.

"I was weighing starting a seltzer company," Luthy said. "But there was something holding me back: looking into the recycling bin and seeing this huge pile of metal cans every time I crushed through Spindrift and LaCroix."

The idea for Plink! came to him in the middle of the night, fully formed. At 2 a.m., Luthy messaged a friend, "It's a bath bomb you can drink. It's low packaging, low carbon footprint, low sugar, delivered by subscription. And it's called Plink!" Then he went back to bed.

"He has all the skills I lack that are necessary to make something taste delicious," Luthy said of Montgomery-Smith. And he had experience scaling a drinks business.

The two "courted on Zoom," Montgomery-Smith said — he in London and Luthy in Vermont, where he had recently moved. They decided to team up and, soon, Montgomery-Smith will make the move to Burlington.

The technology behind Plink! isn't new; effervescent tablets designed to dissolve in water have been around for hundreds of years, popularized by products such as Alka-Seltzer in the medicine and supplement worlds.

"We've simplified it and just focused our efforts on taste and joy," Montgomery-Smith said, though Plink! does contain electrolytes. On the spectrum of "just add water" products — from Kool-Aid to hydration supplements such as Liquid I.V. and Nuun — Plink! is somewhere in the middle and tastier than most with its bright, natural flavors.

Vermont is a natural home for a drink brand focused on sustainability, Luthy said. Whether it's a craft beer or a low-carbon-footprint tablet, "There's this incredible respect for caring about your beverage," he said.

The tablets are currently produced in Minnesota, but a research and development lab is planned for the Burlington area "to tap into the great taste buds of Vermont," Montgomery-Smith said.

For now, Plink! is available online ($22 for 18 tablets, $19.80 with subscription); the company will host local events soon, including a launch celebration.

The original print version of this article was headlined "On the Plink!"