In 1970, a nascent U.S. women's cross-country ski team journeyed to then-Czechoslovakia to race in the biennial Nordic World Ski Championships run by the FIS, the International Ski Federation. The women were new to international competition, but none was greener than Trina Hosmer, a talented middle-distance runner who had taken up the winter sport a few years earlier while earning a master's degree at the University of Vermont.

Hosmer gazed awestruck at the Amazonian physiques of the Soviets and other Eastern Bloc competitors, failing to recognize them as exemplars of better living through chemistry.

"Doping?" Hosmer said recently in an interview with Seven Days. "We were so naïve. We didn't know what was going on."

On race day, Hosmer lined up in the front row to lead off in the four-skier relay. "The gun goes off, and ... this Bulgarian woman next to me wandered into my track and knocked me over and down a steep bank into a ditch," Hosmer recalled. "It took a while to crawl out, and it was pretty intimidating and humiliating. But I had to [keep going], because my three teammates were waiting."

Since 1970, U.S. women aspiring to be Olympic Nordic racers have made an arduous climb out of a ditch of their own. For years, they were routinely underfunded, poorly supplied with facilities and equipment, and sandbagged by coaches who thought them inferior and ill-suited to the demands of the sport.

"Cross-country as a sport is a long game." Kikkan Randall tweet this

Two weeks ago, American Jessie Diggins won an Olympic bronze in the 1.5-kilometer freestyle sprint. On Sunday, she added a silver in the grueling 30-kilometer distance run. Those medals stand for the mettle it took for these women to strive and achieve their rightful place in the sport.

A new book, Trail to Gold: The Journey of 53 Women Skiers, tells the story of these cross-country pioneers. A collaborative, anecdotal account of their course from the sidelines to the headlines, it culminates with the first U.S. women to win an Olympic cross-country skiing medal: Diggins and Kikkan Randall took gold in the team sprint free race in 2018.

Middlebury College graduate and 1984 Olympian Sue Long Wemyss coordinated the work of a group of women from the 2013-14 national cross-country ski team to produce the photo-rich Trail to Gold. It marks the 50th anniversary of U.S. women's participation in Olympic racing. Ten of the 53 women who contributed to the book are from Vermont or have Vermont connections.

These remarkable athletes' path was akin to sidestepping up a steep slope, not gliding on a smooth track. For example, in the '70s, each woman competed with a single pair of wooden skis and bamboo poles, and she waxed her own skis. Today's Olympic athletes have 20 to 50 pairs of fiberglass or carbon-fiber skis in their quivers and specialists on hand to wax them.

"Cross-country is a sport that requires a lot of self-knowledge, which comes through years of racing," Wemyss told Seven Days. "It was hard for many of us to keep at ski racing for long enough to realize our potential, because it's such a financial struggle."

Although ski equipment was modestly priced in the 1970s — in the book, a team member recalls buying skis for $21 — team funding was skimpy. It remained stagnant into the new millennium. Now ski manufacturers offer free skis, boots and poles to team members in exchange for endorsements.

Why did the women stick with it? Dorcas DenHartog, another Middlebury graduate who competed in the late 1980s, writes in the book that she fell in love with "the dance on snow."

Washington State's Alison Owen-Spencer (now Alison Owen Bradley) was one of the original five 1972 Olympians along with Hosmer, Martha Rockwell, Margie Mahoney and Barbara Britch. She recalls in the book, "I came into this world knowing I was meant to go to the Olympics. It took years to know which sport — and for all the doors to open."

History indicates that the first door barring women's participation in ski competition got a swift kick. In 1863, 16-year-old Ingrid Olsdatter Vestbyen requested permission to enter a ski racing competition in Trysil, Norway. According to Roland Huntford's 2009 Two Planks and a Passion: The Dramatic History of Skiing, in her letter to race organizers, the teenager acknowledged that only men and boys could win prizes. "But," she suggested, "in a village where skiing is just as vital for women as for men if they are to get out of the house, it might be of interest to see an example of women's accomplishments in the use of skis."

So Vestbyen got out of her house and into the annals of skiing as the first female racer.

Anyone who has ever stepped into the bindings of Nordic skis knows the sport's demands on strength and stamina. Yet, in their reflections in the book and in interviews, the American women said the key to their survival in the sport, let alone their success, was mental toughness rather than technique. A number of team members said only persistence and a thick skin helped them overcome obstacles more daunting than that shove from an opponent that Hosmer experienced in 1970.

"One coach told us, 'None of you women are going to be any good because you're too fat,'" said Beth Paxson, a native Vermonter who competed in the 1980 Olympics in Lake Placid, N.Y. So, she told Seven Days, she began "depriving myself of food to become skinny or to become faster, because the coach said that's what we needed to do to become better racers. I learned the hard way [that] it wasn't the way to go."

Paxson developed an eating disorder and had to quit skiing for several years.

Hosmer, now living in Stowe, said she was constantly harassed by a coach who didn't want her on the team. "'You're terrible. Why don't you go back to running?'" she recalled him saying. "I was only torn down," she told Seven Days. "It was rough going for me."

It was rough going for the entire sport. To the U.S. Ski & Snowboard organization, Nordic skiing was checkers and Alpine skiing was chess; the latter had glamour and glory and drew far more resources and support.

"From when I was a tiny junior racer, Alpine always got more attention," said Paxson, who now runs a yoga studio in Portland, Ore. "I always kind of had a little bone to pick with that dynamic, because we worked so incredibly hard, and it's just such a grueling sport, and it always felt like we deserved more recognition." 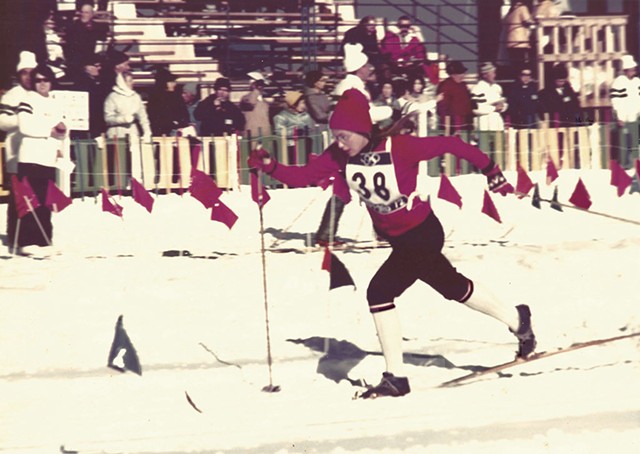 Some Nordic team members felt like they wore invisibility cloaks. Hosmer recalled running into fellow Vermont U.S. Ski & Snowboard Hall of Fame member Barbara Ann Cochran — an Olympic Alpine medalist — and remarking that they had both been competitors in the 1972 Olympic winter games in Sapporo, Japan.

Cochran looked baffled and blurted, "'You were?'" recalled Hosmer.

Of course, there were supportive and caring coaches who encouraged the athletes, but what mattered was winning. Over the years, training techniques evolved, skiers learned the importance of recovery after training and between races, and equipment was vastly modernized.

U.S. women kept training and competing. In the mid 2000s, their successes began to attract attention and funding, according to Trail to Gold. Randall, of Alaska, finished ninth in the 1.2-kilometer freestyle sprint at the 2006 Winter Olympics in Turin, Italy, and the team performed well the same year at the FIS Nordic Junior World Ski Championships. In 2007, Randall became the first U.S. woman to win an FIS Nordic World Cup event.

"Cross-country as a sport is a long game," Randall said in a February 12 interview during a break in her work as an Olympic commentator for NBC (itself a milestone). "You have to be really resilient and gritty and patient. I really admire the women from the earlier era because they had to battle so many things that we don't have to battle nowadays. You heard stories of harassment, discrimination. There was a lot of doping problems back then. The fact that they still love skiing now is so incredible, because they have every reason to be bitter about it."

What shines through in Trail to Gold are these women's dedication to and love for a sport that takes everything you've got.

In an interview, Paxson recalled the 1979 edition of the annual Holmenkollen 50-kilometer race in Oslo, Norway, where proximity to the fjords complicates waxing decisions. Watching her coaches panic as the start time loomed, Paxson made her own call on which wax to use — and raced to her best-ever international finish.

"The 20 trophies were in descending size, from a liter-size silver goblet," she said. "My 19th-place finish got me a silver shot glass, and that is one of my favorite memories."

The original print version of this article was headlined "Uphill Climb"