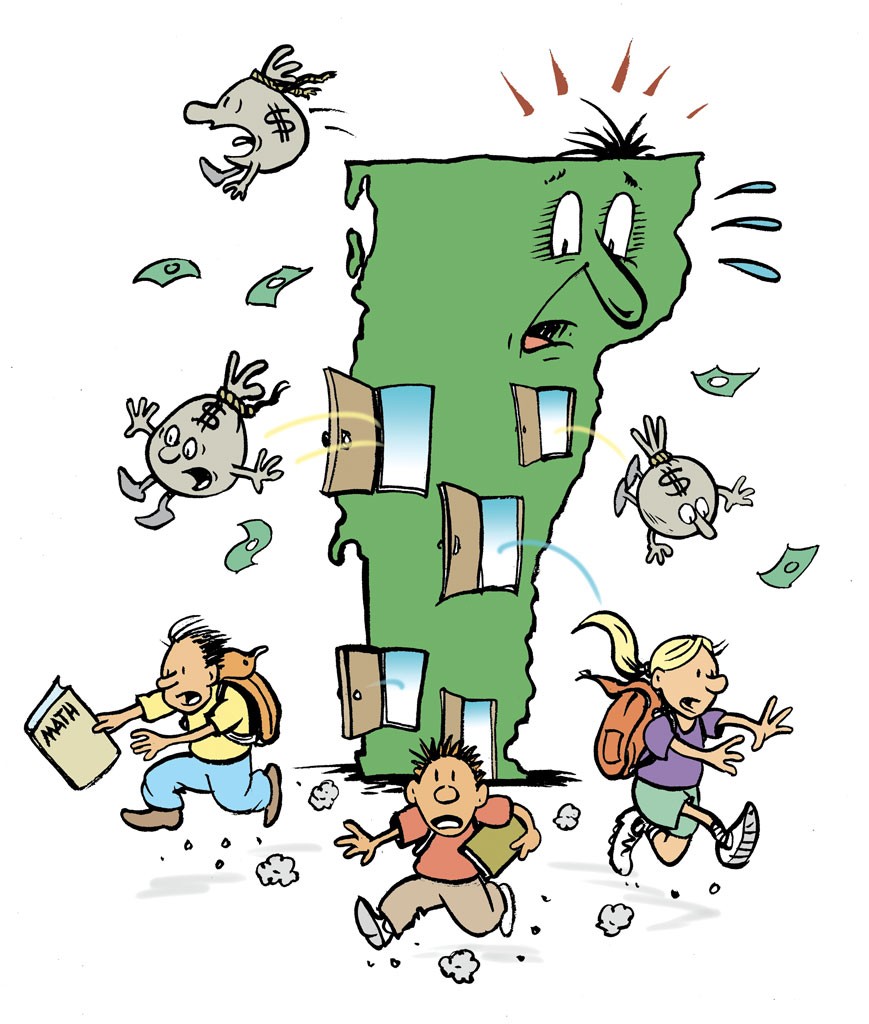 According to Vermont's town tuition program adopted in 1869, towns that do not have public schools can use tax dollars to pay for students to attend public or private schools in or outside the state.

"This bill really is designed to keep our hard-earned tax money in Vermont," Clarkson told the committee last week. "I would love to see us investing in the schools we have here in Vermont."

Clarkson has brought up the idea before, but it's getting more traction this year as lawmakers grapple with rising education costs and declining student enrollment.

"I like it," said Rep. Sarah Buxton (D-Tunbridge), a House committee member. "At a time when our education spending is so limited, we have to look at all the ways we're spending our education dollars."

But not everyone likes it or even thinks the conversation is worth having.

"People feel very strongly about choice," said Rep. Patti Komline (R-Dorset), whose town sent 10 kids to out-of-state private schools in 2013, the most recent year for which detailed information is available. Those schools, she said, present "better opportunities for our kids."

Typically towns pay the average state tuition rate, which in 2012-2013 was $12,461 for high school, according to the Agency of Education. That means taxpayers aren't paying full freight for Vermont students to attend, say, the Hotchkiss School in Connecticut, which this year costs $52,430 per boarding student. Parents pay the difference.

H.38 would exempt border communities that send all their students to schools in neighboring states or in Québec. But even so, it would likely equate to less business for schools in New Hampshire and other states.

Clarkson has taken a fair amount of grief over her proposal. Detractors have accused her of hypocrisy because she sent her own children to the private Groton School in Massachusetts, for which her family paid full tuition.

"It's an elitist attitude," said Komline, who serves with Clarkson on the House Ways and Means Committee. "There are a lot of people that, without the voucher, wouldn't have the opportunity to send their kids to those schools."

"That's not the issue," Clarkson countered. "The issue is publicly raised state tax dollars going out of state, supporting out-of-state institutions, when we have great institutions in state."

According to Clarkson, some families — particularly those in ski towns — abuse the system by establishing second homes as their primary residences and using their newfound Vermonter status to send their kids to expensive boarding schools.

But school officials in so-called "tuitioning" towns say such unscrupulous behavior is uncommon and that the process is closely monitored.

Bennington-Rutland Supervisory Union superintendent Dan French, who oversees 11 school districts that all send students out for schooling, said there is a fraud-detection process. Parents have to prove residency every year, and school districts must confirm that the schools that students want to attend meet quality standards.

However, French said that the districts could use a clearer definition of residency. Vermont law describes residency as the place where either parent resides, while other states specify how many days of the year one must live there to qualify as a resident. French said school districts can ask for income-tax forms, but parents can refuse to provide them.

"There's no clear, qualifying standard in the law," he said. "We're left on our own."

While most towns that send students out of state pay the average tuition rate — to both in-state and out-of-state schools — municipalities can choose to pay more if voters approve a larger amount.

Last year, Dorset paid $14,450 per student for 91 high schoolers to attend nearby Burr and Burton Academy, a private school in Manchester. The town opted to pay the same rate for two students to attend the local private Long Trail School, though that school charges higher tuition and parents had to make up the difference.

Education Secretary Rebecca Holcombe questioned the practice. She wonders whether towns should be allowed to pay above-average rates because, given Vermont's hybrid state and local property-tax system, all Vermont property owners are essentially footing the bill.

And while sending Vermont students to study abroad on state dollars sounds extravagant, in 2013 the town of Dorset paid just the average rate for a student to attend high school in Sweden. Tuition at that school was no more expensive than if the student had attended Emma Willard in N.Y. In fact, it was less expensive than if the student had attended Vermont's Burr and Burton.

For Clarkson, H.38 isn't about saving money. She believes that keeping education dollars inside Vermont will help strengthen the state's economy and boost sagging enrollments.

How will the bill fare? It's one in a thick tome of ideas about education funding that lawmakers are reviewing this year. But when committee members made a list last week of possible solutions to pursue, the out-of-state tuition ban made the list.

"It's not the answer," said Rep. Kurt Wright (R-Burlington), adding, "I think it's a fair issue to discuss."