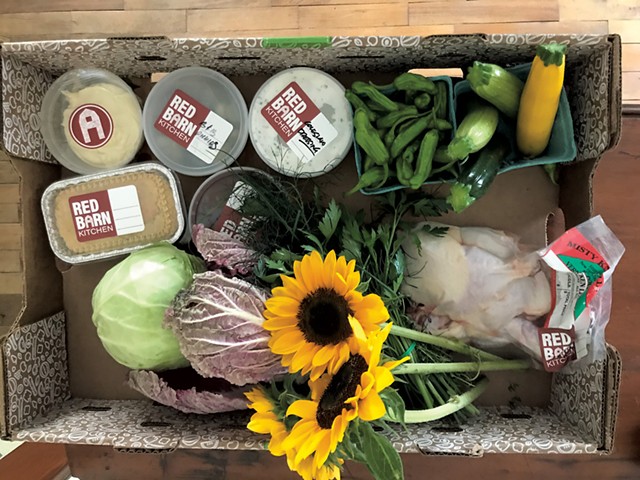 Matt Jennings and Hilary Gifford met the way most people seem to these days: online.

Jennings, a chef from Boston who moved to Charlotte with his family two years ago, and Gifford, a vegetable farmer in North Ferrisburgh, connected on a Vermont agriculture website. She responded to a post from Jennings, who wanted to team up with a farmer to grow vegetables and work on related food projects.

Jennings and his wife, Kate, had learned firsthand during their debut growing season in Vermont that farming "is more than a full-time job," he said. So, he sought help online.

"And the magic started," Jennings said.

That magic is contained in the locally sourced meal kit, Barn Box, that Jennings and Gifford launched in early July. The weekly food box consists of vegetables and herbs that Gifford grows, along with sauces, condiments and other prepared foods Jennings makes at his new seasonal venture, Red Barn Kitchen.

"It's nice to connect with people who are not necessarily professionally trained." Hilary Gifford tweet this

Key components of Barn Box are Jennings' recipes that guide home cooks in making a meal from raw ingredients and his premade contributions. The bonus? A pair of food pros with complementary expertise decide what's for dinner.

"People just want to be able to pick something up, have a recipe ... cook it and have dinner on the table in 20 minutes," said Jennings, who credits Kate for suggesting the barbecue chicken dinner that Barn Box offered earlier this month.

"This thing is totally in its [initial] stages," Jennings continued. "The goal is to make somebody's evening easier and have it be an experience that's driven [by] local producers."

While the produce is grown at Gifford's farm and on a plot at the Jennings' property, some ingredients, such as meats and grains, are sourced from other local farms.

The weekly Barn Box offering is posted Sunday evenings on Instagram @redbarnkitchenvt. Customers can order the food weekly, or just occasionally, through a sign-up Sunday through Wednesday; pickup is on Friday at Backdoor Bread in Charlotte. The price varies with the contents of the box — from $25 for appetizers to serve four (a recent offering: crostini with caponata, marinated mozzarella and pesto) to $45 for a chicken dinner that serves three or four people.

I happened upon Barn Box on Instagram soon after the first post appeared. I signed on quickly for a very specific reason: Caesar salad. I adore Caesar salad but never make it, and here it was just a click and a short drive away.

Along with a selection of veggies, including two heads of gem lettuce, the box came with a jar of Jennings' charred scallion Caesar dressing and its recipe.

As that first Barn Box was over the July 4 weekend, my family decided to add the holiday-appropriate, optional ground beef from Fat Cow Farm in Charlotte to make burgers. Jars of Jennings' toppings and condiments included kimchi, pickles, and a mayo-and-ketchup-based "special sauce."

"This is the best cheeseburger I've eaten in a long time," I bragged to my daughter, after dolling up the Barn Box patty with cheddar cheese from our fridge. We sautéed Gifford's scallions and spooned those onto the burgers — an echo of the Caesar salad dressing.

I was intrigued enough to try again the next week, getting the Barn Box chicken dinner to make for myself and a friend. This time I used the recipes, which hadn't come into play for cheeseburgers and salad.

Though I love to cook, I don't usually follow instructions. But in a phone call with Jennings about six months earlier, his little riff on pots and pans fascinated me. If I hung on to his every word about a sauté pan, I figured I should pay attention to his cooking instructions.

I was right about that. I learned that it's OK to leave raw chicken out at room temperature for an hour thanks to his recipe, which called for marinating chicken legs in a bag with his molasses barbecue sauce. Jennings also advised Barn Boxers to open the windows and turn on a fan before making charred shishito peppers. I followed that recipe to a tee — maybe because it has only four steps, including opening the window.

I also made a vegetable slaw with colors — yellow, green and purple — that stoked my appetite. It consisted of grated zucchini and squash with thinly sliced red Napa cabbage, all tossed in Jennings' buttermilk dressing. This dish delivered a small revelation: Zucchini is better raw than cooked.

The chicken dinner required some improvising because we don't have a grill, and you can't grill chicken legs without one. So, I turned on the stove fan before charring the peppers, seared the chicken in a skillet and then baked it. The meal, which came with cornbread and pickles, was fun to put together and terrific.

In fact, I texted Jennings as I was cooking to tell him I got a kick out of following his recipes. He texted back: "Just a start. Had to begin somewhere. Hope to develop it more!"

The quality of Barn Box is not surprising, given Jennings' background as a cookbook author and longtime chef. He and Kate, a pastry chef, owned restaurants in Providence and Boston before they moved to Vermont. They wanted a place with land to grow vegetables, raise animals and build a commercial kitchen.

In Charlotte, Jennings fell in love with a home and barn previously owned by a baker. He and Kate are nearing completion of the renovation of Red Barn Kitchen. The collaboration with Gifford is the first of various culinary projects they plan to launch there. Jennings envisions catering and cooking workshops, as well as a little pickup window.

"It's got to be organic," he said. "It's got to work with Hilary's lifestyle and my lifestyle. I'd rather it be really great quality, and grow into it as we grow."

Thirty-five-year-old Gifford (aka Farmer Hil) uses organic practice on the land she farms in North Ferrisburgh, where she's farmed for five seasons. She grows produce for area restaurants and, prior to COVID-19, worked as a server and bartender at Hatchet in Richmond. She also grew vegetables for Ubuntu, a vegetarian restaurant in Napa, Calif., that had its own garden. The restaurant, which closed in 2012, was "one of the great places on the planet," Jennings said.

Gifford said she has a particular interest in growing heirloom vegetables and new varieties to offer both chefs and home cooks. Examples: the Red Dragon cabbage featured in the slaw, and heirloom tomatoes that will be made into Bloody Mary mix for an upcoming Barn Box brunch.

"I like to cook," Gifford said. "So, it's nice to connect with people who are not necessarily professionally trained."

The original print version of this article was headlined "Kitchen Assist"