Sixteen-year-old Holly Dunlop had never handled livestock before last November, when her family moved to a farm in Marshfield. The Dunlops' previous experience with animals, in suburban Washington, D.C., was limited to caring for the family dog.

Yet Holly was the family's go-to person when it came to castrating piglets born this spring.

"We don't want to do it," her mother, Catherine, said of the rest of the family's view of farmyard surgery.

In moving to the 205-acre farm, the Dunlop family joined the long line of weary urbanites who have moved to rural Vermont in search of a simpler life. In recent months, the pace of migration has picked up, with out-of-staters bidding above asking price for Vermont properties.

"We do a lot by gosh and by golly." Neil Dunlop tweet this

The Dunlop family's journey began last summer, when Catherine and Neil and their four teenagers spent the night at Hollister Hill Farm B&B, which they had also visited in 2007. Longtime owners Bob and Lee Light had been trying to sell the place for three years.

The farm has long been a busy place. In addition to the B&B in their 19th-century, six-bedroom brick home, the Lights ran a sugaring operation and a small store that offered the farm's beef, bacon and turkey. They milked 75 cows until they sold the herd in 1997. The couple also sold logs and hay, raised puppies and, for years, kept an 800-pound boar named Sky after a local family changed its mind about slaughtering an animal that had become a pet. Kids were welcome to visit the barn, and Bob was well-known as Marshfield's zoning administrator. 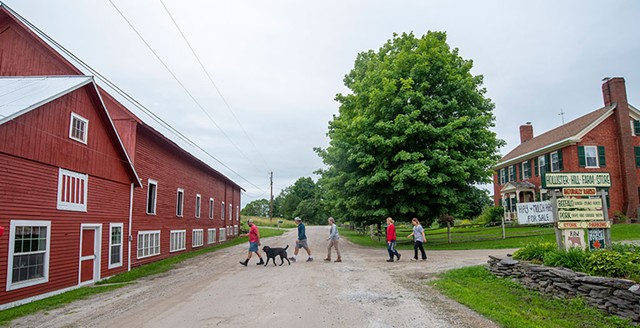 But by 2018, the Lights couldn't do the heavy lifting themselves and were ready to retire.

"Basically, all the profit we made went into paying the help," said Bob, who is 80. The couple has moved to a home in East Montpelier.

Meanwhile, the Dunlop parents were growing disenchanted with their fast-paced life in Chevy Chase, Md., where they had moved in 2016 after living in New York. Neil, who had worked in home design, journalism and public relations, was flying for work 100 times a year, and he said the kids — now 18 and 13, along with 16-year-old twins — were growing up too fast. Two were in Catholic school, and two in public. The latter had metal detectors and gangs; there were reports of classmates doing drugs.

He worried that the kids were moving away from the values the parents wanted for their family.

"It seemed to us they were behaving like it was natural to aspire to a lifestyle of nightclubs and cars and no responsibility and complete and utter hedonism," said Neil. "There were no ethics or work values or any sense of what the real world was like ... It wasn't just them; it was everyone around them."

So, last fall, the family bought Hollister Hill Farm — for $990,000, according to town records — to embrace the slower pace of life in Vermont. The Dunlops' three girls enrolled at nearby Twinfield Union School, which has 340 K-12 students; their son, a high school junior, attended his D.C.-area school remotely.

"Everybody has said, 'You are living my dream.'" Catherine Dunlop tweet this

Lily Dunlop, 13, had 500 classmates at her D.C. school. Today, she has fewer than 30 and is weighing the pros and cons of living in a small community.

Next-door neighbor Jordan Howe, 37, who had worked for the Lights throughout his childhood, has stayed on as a full-time farm manager and been key to keeping the place going. Neil and Catherine said they have learned the rudiments of animal care — their livestock includes 18 head of black Angus cattle and four Jersey cows — but they leave much of the animal care, haying, maple sugaring and other matters to Howe. They handle the B&B business themselves.

Neil spends much of his time in his office, a lot of it writing fiction; Catherine has held on to her full-time job, working remotely for a New York software company.

"We do a lot by gosh and by golly," said Neil, who acknowledged that he didn't try to learn every detail about running the farm when Bob Light was still in the picture. Instead, he draws confidence from his Christian faith.

"I don't want to sound like a kook or anything, but we don't make a lot of major decisions without believing that it's part of our faith journey," Neil said. "We want to do something that has meaning and, especially, to help other people."

Little has changed since the farm was one of the largest dairy operations in town. Visitors describe the farm as Eden, as a slice of paradise, Neil said. The 1825 brick farmhouse and its lush surroundings convey the mixture of permanence and grace that comes with centuries of hard work on the land.

"We consider the farms, the landscape and the animals a gift we want to share with others," Neil said. "That was a large part of our reason for buying it and our efforts to restore it and keep it running for others to enjoy."

They plan to share it through their farm store and through expanding the B&B; their first guests arrived earlier this month.

It's not always sublime. After Howe fell off his mother's roof while shoveling snow and broke his femur, a crisis occurred every day, Neil said. Yet, even before the ambulance had left the scene, a neighbor called to offer help. And dozens of people who have known the Lights for years turned out to assist their successors with sugaring.

Neil had already undergone a crash course on the subject every farmer must know: fixing equipment. The gutter chain in the barn, which runs the manure removal system, was so old and thin that the links broke constantly, he said, sometimes twice a day. A replacement ordered in December didn't arrive until April.

"There were several days in five-degree weather where I was covered in manure working five hours to fix the chain," Neil said. "I have a lot of confidence in myself, but that doesn't mean I know how to use an acetylene torch."

With eight months of experience, things have settled down. Howe returned to work in May. He said the Dunlops have learned a lot.

"Neil is pretty good at reading stuff online and researching stuff before he does it," Howe said. "And he's very good at marketing," he added, which is particularly important when it comes to the self-serve farm store and the B&B.

The family has acquired goats, donkeys and chickens, and plans to expand the B&B, which now consists of just one apartment, to a dozen rooms or more to bring in revenue. The family's goal is to break even on the farm and B&B, though the operation is losing money right now. Meanwhile, Catherine's software job keeps the family in the black.

The kids were initially unhappy about leaving their friends in D.C.; a couple of the girls threatened to stay there and live in a local park, Neil said. But they now have largely positive reviews about the family's decision, in part because of their new proximity to snowboarding, but also because they have discovered they enjoy the animals and the outdoors.

They have new local friends. When old friends visit, they are amazed by the beauty of the farm, Catherine said.

"They have been able to see it through their eyes," she said.

Finley, who is 18, is probably the most enthusiastic new adopter. His mother said he had nothing but complaints when the family first arrived in Vermont. But in the spring, a neighbor's son took him turkey hunting, a day that he later declared the best in his life. He started scouting the property for birds and set up a game camera, and he's decided to do his senior year at Twinfield, in a class of 12.

He hopes to bag a deer in the fall, and he'd like to farm one day. While he's enjoyed learning how to build fences and use equipment, he said it's the self-sufficiency of his farming and hunting friends that he appreciates the most.

"It's nice getting to work with people who love what they do," he said.

His sister Holly has been learning veterinary care from the farm's vet, Tom Stuwe of Barre. She noted that it saves the family money when she can perform simple surgery, such as castrating piglets, and Stuwe enjoys teaching her the skills.

He has been treating Hollister Hill Farm's animals through a succession of owners for 46 years, and he's relieved the property will stay intact and in use.

"It's nice to see a family adapt so well," he said.

Living on a farm was Neil's dream; Catherine was initially skeptical that the family could prosper in such a new setting. But eight months in, she's impressed by the community's support and excited about expanding the B&B.

"There is a huge demand and potential for us to expand the whole farm experience," she said. "Everybody has said, 'You are living my dream.'"