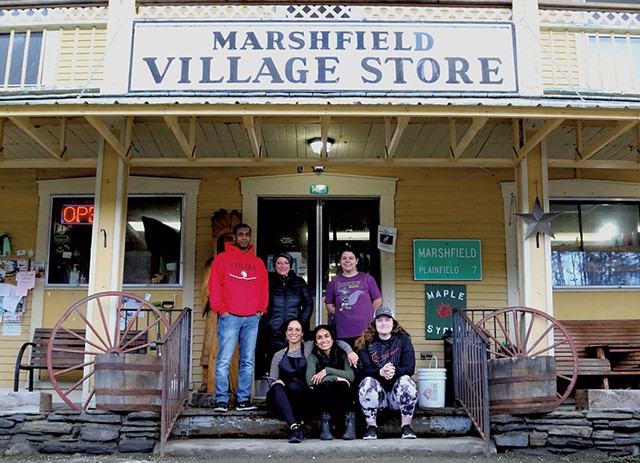 The Marshfield Village Store has been a mainstay in town since it was built in 1868, serving up coffee, sandwiches and conversation. This year, while the menu will stay the same, the store is evolving into a worker-owned cooperative.

Its five new owners raised $700,000 from anonymous donors to purchase the building and its inventory on February 7. They have formed a governance group and make all decisions together. Ultimately, any of the dozen or so people who work at the store will be able to become owners, too, and their share of the profits will be linked to how much they work.

Kenny and Ciara Phillips, who owned the store for seven years, won't be involved, but Ciara's mother, Deborah Olson, runs the deli and will eventually become an owner.

The new owners plan to continue serving coffee, prepared foods and grocery staples at the store, which is open daily for 12 hours or more. They'll also offer local food and crafts. Co-owner Senayit Tomlinson said a primary goal is to keep food affordable and accessible for all. She deplores the gentrification she sees happening in the upper Connecticut River Valley, where she lives.

"You can't find your cans of soup," she said of country stores in towns such as Woodstock.

Tomlinson, an Orford, N.H., resident whose father is from Ethiopia, added that she also has trouble finding other Black, Indigenous and people of color who work in upscale country stores. That lack of BIPOC workers deters BIPOC customers from shopping at such stores, she said. She hopes that visits to the Marshfield store will change some perceptions.

"There are three of us out of the five working at the store who are BIPOC," said Tomlinson, who was a cashier at Chapman's General in Fairlee for years. "It's amazing. I don't think I have ever had a job in this area where I wasn't the only brown person."

While the worker group doesn't have a hierarchy, it does have a leader of sorts in general manager Michelle Eddleman McCormick, who has worked in sales and in social justice and community organizing in the South.

"It was reassuring to learn that we were part of an actual movement across the state to preserve these general stores." Michelle Eddleman McCormick tweet this

Eddleman McCormick moved to Marshfield from Naples, Fla., a year ago with her family, seeking respite from the heat and smog. When she learned that the store was for sale, she contacted the Vermont Employee Ownership Center, a Burlington nonprofit that helps workers with the details of such a reorganization. VEOC gave her technical advice and referred her to Preservation Trust of Vermont, which for years has supplied ailing country stores with technical assistance and grants.

That's when Eddleman McCormick realized that she wasn't the first to try to save a Vermont country store.

"It was like, Oh, OK. So this isn't, you know, a completely out-of-left-field idea," Eddleman McCormick said. "It was reassuring to learn that we were part of an actual movement across the state to preserve these general stores for economic and social reasons."

Both entities are part of a larger nonprofit called the People's Network for Land and Liberation that seeks to help workers from underrepresented groups create worker-owned co-ops.

Many of the original incorporators — none of whom is originally from Vermont — met last year through an Upper Valley organization called Regeneration Corps, which educates high school students about social justice, climate change and agriculture.

Keeping the store going is just one of Cooperation Vermont's projects, though the group hasn't determined exactly what the others will be. Tomlinson, a musician who teaches anti-racism workshops, plans to use the top floor of the building, a former dance hall, as a meeting place for people from underrepresented groups. She's excited to show tourists and locals alike that there's a place for BIPOC people in rural Vermont, despite its majority whiteness. She said it's clear that store visitors like to see the diversity.

"I have noticed it in some of the BIPOC folks that do come into the store as customers," she said. "We're all hanging out."

The idea of cooperative governance goes back a long way in Marshfield. The town of 1,600 is a blend of longtime residents, many whose families farmed in Marshfield for years, and newcomers who started arriving in the '60s.

The cultural gap between locals and newcomers started to narrow when educator Royce Pitkin, who grew up farming in Marshfield, founded Goddard College. Since 1938, the progressive, experimental liberal arts college in Plainfield has drawn artists, intellectuals and back-to-the-landers who, over the years, have made their own mark on the local culture.

"As kids in the area, we were always exposed to people from other places way before, I think, most of Vermont was," said Michael Stark, 68, who was born in Barre and has worked as a local building contractor for four decades. His mother was from New York City; his father was a Bennington native who attended Goddard.

Communes have come and gone regularly in the area for decades. Many fell apart after surviving just one winter. At least one, in Plainfield, is still around. Another, the Neruda Intentional Community in Marshfield, closed last year after a 14-year run.

"Marshfield was sort of a hotbed for a lot of this stuff," said Dan Chodorkoff, a Marshfield resident who cofounded the Institute for Social Ecology, a long-running utopian experiment, with the late Burlington resident Murray Bookchin. He noted that the 50-year-old Plainfield Co-op grocery store — which is owned by its customers — prompted the creation of Hunger Mountain Co-op in Montpelier.

Of course, a worker-owned business such as the Marshfield Village Store is quite a different proposition from a communally owned farm. For one thing, it has a much higher chance of surviving, said Chodorkoff, who moved to Vermont from New York in the 1960s to live on a commune in Woodbury. In February, Fomite Press published his novel Sugaring Down, which is based on that epoch. It helps, Chodorkoff noted in an interview, that you can go home to your own space after a shift at your cooperatively owned business.

VEOC executive director Matt Cropp said he's had more inquiries than usual lately about creating worker-owned co-ops. Those that survive, he said, tend to have formal power structures and an elected board of directors that supervises the general manager.

Whatever governance structure they choose, the new owners of Marshfield Village Store have their work cut out for them. Although the community holds plenty of goodwill toward the store, which has been running continuously since 1868, external forces — such as rising food costs and changing demographics — make survival difficult for country stores these days.

That's why so many rely on help from foundations, local donors and creative structuring. The 170-year-old East Calais General Store, just five miles to the west of the Marshfield Village Store, closed because of financial problems in 2019. It's due to reopen this year thanks to $1.3 million in donations and the work of a community trust.

The Marshfield store shares a parking lot with a gas station and convenience store that also recently changed hands. It's not clear yet what kind of competition that will present.

The town retains some rural quirks that belie the rising prices of its homes. The biggest adjustment Eddleman McCormick has faced so far is not the dirt roads or the weather but the lack of phone connectivity in the village.

"I had better cellphone service in the mountains of Uganda 20 years ago than I do in Vermont," she said.

But the group is starting out unburdened by the monthly mortgage payments that can cripple a business with small profit margins. Eddleman McCormick is working overtime to apply for liquor and other licenses; she has set up a meeting with someone from the state to learn how to use the deer-weighing station out back.

Both of Eddleman McCormick's parents were in the military, and the family moved frequently. She has quickly made Marshfield her home.

For years, she was the director of business development for a large international travel company, she noted, and was responsible for more than 1,000 volunteers when doing disaster cleanup work in New Orleans after Hurricane Katrina in 2005. That work, she said, provided her with the foundation for handling the new challenge of running a Vermont village store.

"Some of it is a little bit trial by fire," she said. "But I have done a lot more complicated projects than this in the past."