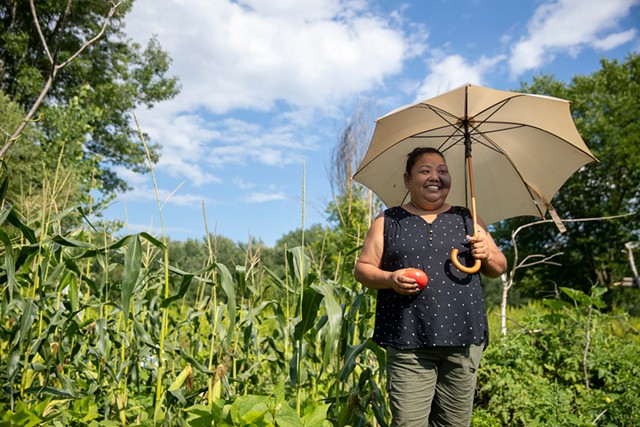 Man Rai carried an umbrella for shade as she approached her family's vegetable gardens at the Ethan Allen Homestead on a steaming, sunny August afternoon. Across the meadow, kids horsed around against a backdrop of tasseled cornstalks reaching well above their heads.

"This is my father's garden. I have one, too," Rai, 35, said, standing by a row of daikon radish. "We're here to take the grass out of the jungle," she added, with a laugh at her own description of weeding.

Rai, her sister and her brother-in-law had come to tend several family plots that cover about half an acre. They pay an annual fee of $50 per one-sixteenth acre to the New Farms for New Americans gardening and agriculture program, which was started in 2008 by AALV, a Burlington nonprofit serving refugees and immigrants.

"We're working all together and eating from the garden," Rai said of her extended family of 15. They are among more than 2,500 Bhutanese people of Nepali heritage who have been resettled in Vermont over the past decade or so. Most spent years in eastern Nepalese refugee camps after leaving Bhutan, due to ethnic and religious persecution. Rai summons to mind the date she arrived in the U.S. (February 7, 2011) as quickly as she shares her birthday.

At the edge of the verdant patchwork of gardens, a new shade structure held a small purple birdhouse. Several notices were pinned around its wooden doorframe, listing COVID-19 garden safety protocols in both English and simple pictures.

New Farms for New Americans manages seven and a half acres of land, some at the Ethan Allen Homestead and some in Burlington's Intervale. The 67 families who are raising food for themselves speak at least half a dozen languages collectively. Most came to Vermont from Bhutan, Burundi, Somalia, Burma or the Democratic Republic of the Congo.

AALV program specialist Alisha Laramee estimates that the gardens feed 250 to 300 people. But the value of the program goes beyond fat cabbages, bottle gourds and green beans as long as shoelaces. Lush plots filled with plump white African eggplant and canary-yellow hot peppers represent the opportunity to work as a family raising familiar crops near others with shared life experience.

Right now, the gardens also help fend off the food insecurity that is affecting people statewide. 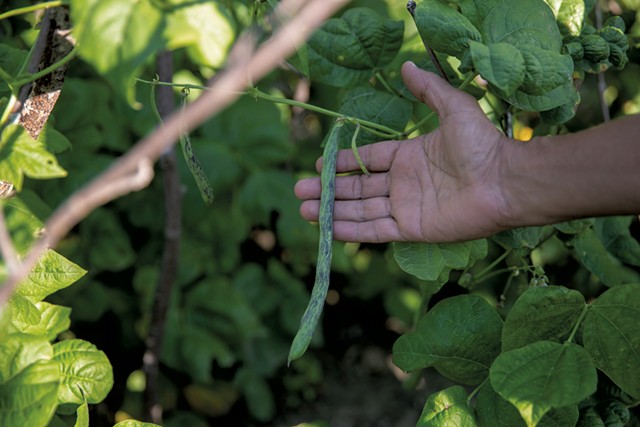 An early June coronavirus outbreak in Winooski triggered discussion at AALV about closing the gardens to reduce transmission risk, even though there were no known cases among participants.

"I said, 'When they shut down Hannaford, we'll shut down the farm,'" Laramee said emphatically. "What is happening here on the ground is really quite miraculous in terms of the amount of food people are growing."

Ponga Lubula left the civil war-torn Democratic Republic of the Congo in 1999. Now in her forties, she lives in Colchester and works as a caregiver. When she first came to Vermont, Lubula said over the phone, "We didn't have a lot of people from my country."

As more Congolese escaped the ongoing conflict and landed in Vermont, the gardens gave them a place to connect, she said. It also provided space to cultivate their own varieties of eggplant, amaranth, squash and corn. "African squash and the corn is different from American," she emphasized.

"Back home, we live in community. Here, you feel lonely. The gardens help us to be together," Lubula said. "We do everything with my people like back home. We work as a team. We help each other. We feel like we are back home. In winter, we will feel lonely again."

New Farms for New Americans has gone through various iterations over its 13 years. For six seasons, it operated as a social enterprise in which participants worked cooperatively to raise crops for sale. But the revenue, once divided, didn't amount to much for each family, Laramee said.

Similar programs around the country have incubated New American-owned farming enterprises. In Vermont, Laramee said, because of population demographics and other factors, relatively few participants have established their own agricultural businesses. While many previously supported themselves with subsistence farming, their new urban living situations and other available employment options made agriculture both less accessible and less necessary for survival.

Still, many New Americans missed working the land, as well as eating familiar vegetables that are hard to buy locally. "Families were expressing a want or need to grow food for their own families," Laramee said, at a scale that traditional community gardens couldn't satisfy. The AALV program's one-sixteenth-acre minimum is more than three times the size of the largest Burlington-area community plots.

"They're not hobby farmers, they're subsistence farmers growing a significant amount of food to feed their families," Laramee said. "People are eating off of these gardens all winter. They are very proud of that."

Many of the plots are tended by multiple generations of one family, and the garden can be an important way for elders to contribute. "The reward of being able to grow food for your family and save money is so much more than what they were making through the social enterprise," Laramee noted.

AALV offers support services such as soil preparation, a greenhouse for starting seeds in the spring, a community corn-grinding mill and advice on extending the season.

This year, the demand for gardens was up, although Laramee said she was able to accommodate all but three applicants. She suspects the pandemic prompted the increase; some people lost their jobs, and many simply had broad concerns about food access. 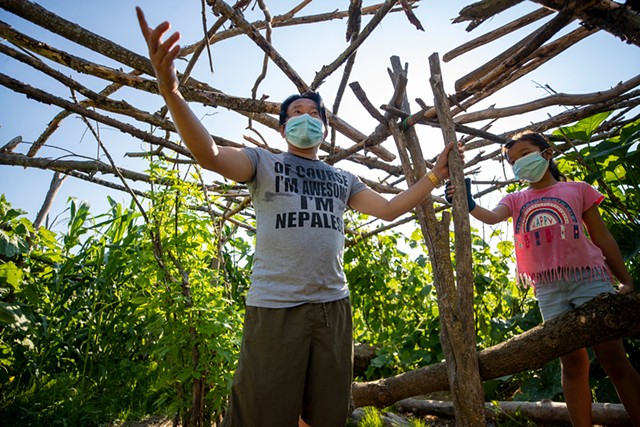 With sweat soaking through his T-shirt that proclaimed, "Of course I'm awesome. I'm Nepalese," Bidur Rai took shelter from the afternoon heat, along with his 6-year-old daughter, Bisasta, under the trellis he'd constructed for gourds and other vining plants in his Ethan Allen Homestead plot. (He is not related to Man Rai.)

The elaborate structure, created with driftwood from the Winooski River, is similar to one his parents would have made back in Bhutan and Nepal, Rai said: "When the fruit hangs down, it gives support."

Rai's family of five had just finished eating the peppers they grew last summer, he said with satisfaction. Their frozen tomatoes lasted until mid-July.

Rai, 42, came to Burlington in 2015 after many years in a Nepalese refugee camp. At the time, he was in a wheelchair due to untreated injuries, for which he has since received treatment that enabled him to walk again. Rai is a part-time family support consultant for Vermont Family Network, and his wife works nights at the hospital.

In the refugee camp, Rai said, "Food given by the government was not sufficient to survive." The family had a small space to grow beans and tomatoes and cultivated some land in a nearby village.

Now he proudly showed off a healthy flowering tobacco plant. "It has lots of benefits," he said: The leaves can be wrapped around joints to relieve pain, or ground into a juice that serves as a natural pesticide.

Rai said he has enjoyed meeting fellow gardeners. "With the Vietnamese, we share seeds of pumpkins. With the Somali, we share our lenga lenga [amaranth] and peppers," he said. "They gave to us; we gave to them. We communicate in sign language. Our kids would play together."

Bisasta shyly offered that her favorite garden plant was pumpkins. Asked how she likes to eat them, she said, "You can make pumpkin pie." 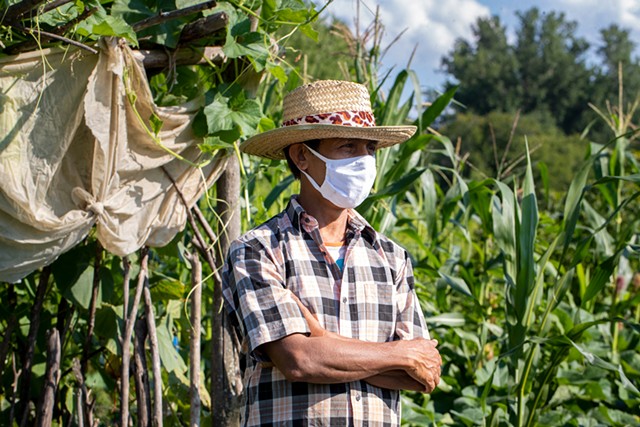 Rai's friend and garden neighbor Ganga Kuikel, 51, said it had been "12 years and three days" since he arrived in Burlington from Nepal as a refugee. He now works as a Burlington School District multicultural liaison.

The friends share seeds and stories. Like Rai's, Kuikel's gourds are supported by a trellis of tree branches. "It is happy to be hanging," he said, showing off a healthy specimen. "On the ground, it will decay."

"We feel good when we produce our own food." Ganga Kuikel tweet this

Gardening for him is primarily about health and self-sufficiency, Kuikel said. "I like to eat the organic food, so if I grow [it] myself, that is better," he said. "We feel good when we produce our own food."

This year, especially, there are more reasons to do so. "More people, they tend to grow because of the pandemic. They lost their jobs. Some of them are afraid they won't have a job, so they grow more," Kuikel said.

When the gourds are ripe, Kuikel will steam and freeze some for the winter. He bought a new freezer to store all his produce.

The leaves of amaranth, he detailed, "We prepare like any other vegetable. We cut it, put in the oil and a lot of spices, like cumin, coriander [and] ginger, garlic, onions."

Corn is prepared in many ways. "Back in Bhutan and Nepal, in the mountain areas, this is the main staple food," Kuikel said. Dry kernels are ground and made into a porridge. Fresh corn is boiled, fried in butter or roasted in the fire.

Another method evokes specific memories for Kuikel: Whole dried kernels are fried whole, and some pop. "That we take as a snack when we go to help on a farm," he said. "In Bhutan, that is called parma; it means helping each other."