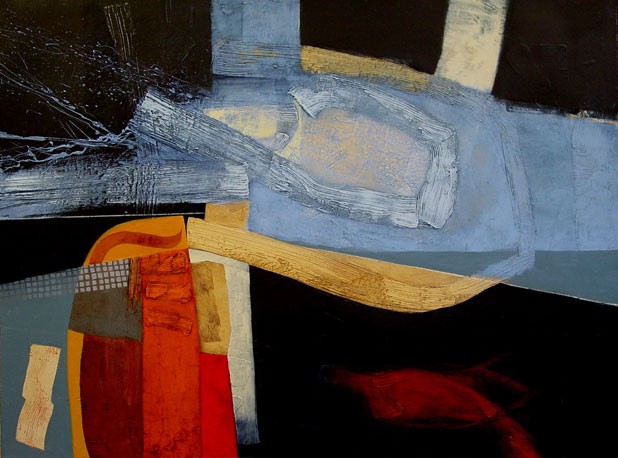 Like paintings by Paul Klee and William Baziotes, the biomorphic abstractions of Burlington artist Beth Pearson are rooted in the natural world while fluently speaking the language of formalism. Her spaces tend to be defined by horizons and strong figure/ground relationships. Her colors, while generally simplified, are often legible as skies, a beach or even a field of green grass. Textures — sometimes built up, sometimes scratched on a panel’s surface — are another dominant force in her paintings. Pearson’s current exhibition, “Recent Paintings,” at Furchgott Sourdiffe Gallery in Shelburne, brings to life a range of shapes and spaces that transcend the boundary between a world of objects and a less easily defined visionary space.

Pearson’s 24 paintings on display range from 5-by-5-inch images up to the vertically oriented 60-by-36-inch “Shadow of Protection.” That large work uses a simplified approach to color in conjunction with a fairly flat linear composition, consisting of broken iterations of geometric shapes. Rectangles buried in the magenta field at left are echoed by a rectangle in a light-blue field in the upper-right-hand corner. Curves swoop through pale yellow in central areas of the composition. At the top of the painting resides a rugged, circular blue form that seems to be hanging on a red line. Technically, that blue form is the “figure” of the composition, and the background of overlapping planes of yellow and crimson is the “ground.”

“Drama With Consequences” is another of the exhibit’s larger paintings at 30 by 40 inches. It possesses a broad spectrum of lights and darks, ranging from cream and pale-blue textural details to deep fields of blackness. Edges of the lighter-valued forms stand out crisply over the tenebrous space in which everything floats. At the lower left, small details appear — dots and raised textures that contrast with the large brush- strokes dramatically sweeping over central areas of the composition.

Perhaps the most literal of Pearson’s abstractions is the 18-by-24-inch “When Summer Rolled Around.” It has a high horizon line where gray and steely blue meet, like water and sky. A series of vertical lines undulates between them, and a sandy-colored area at lower left, containing a circular form, reads as a beach. It’s a peaceful abstraction, with a clean and uncluttered color harmony. Two small, red elements, like tiny feathers, appear inside the circle on the “beach,” but they’re mere grace notes in the broader rounded design element.

Pearson has included many small and playful pieces in her show. “Mirror Mirror” is one of several 5-by-5-inch pieces on display, while “Garden of Riches” is just 9 by 10 inches.

“Mirror Mirror” almost resembles an aboriginal form. Coiled red lines rise to a striped red oval that seems to have grown like a flower at upper left, over a deep blue-black sky. Three rows of dots radiate from the oval.

A pair of wings suggestive of a stamped print appears in “Garden of Riches.” Tiny squares dance over the fields of the highly textured composition, as if a checkerboard had exploded on the painting. It’s festive compared with some of Pearson’s more reserved, or at least more simply composed, works such as “Mirror Mirror.”

In her artist’s statement, Pearson describes her process this way: “It’s like writing a story without knowing the plot. Mistakes are made, shallow ideas played out, thoughts trashed and rehashed and reborn.” Her process leads her to discover narratives as she goes along, she explains, saying, “Watching whatever emotional content or narrative message take root in a composition is the final reward.”

That process is rewarding for Pearson’s viewers, as well.