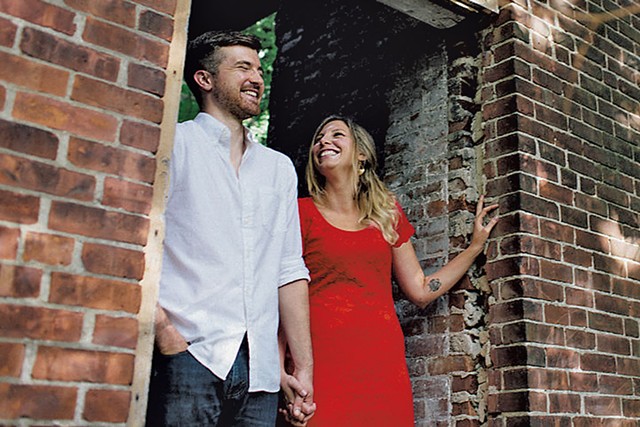 If you've been through the process, you know there's a learning curve, complete with near misses, drama and mystifying paperwork along the way. If you're starting to think about getting out of that rental and buying your own home, our House Hunters just might have some eye-opening tips for you.

Home at Last: After a Yearlong Search, Jessica and Nick Settle in Waterbury

When Jessica Hendry Nelson and Nicholas Adams got married in August 2015, they merged hopes and dreams for their life together. Key in their vision was an old house, something with character and charm in which they'd start their shared future. The young thirtysomethings wasted no time and started house hunting later that month.

Nest first spoke to Jessica just a couple of months into their search, which had already been an emotional roller coaster ride. She and Nick had immediately fallen for a great house on two acres in Georgia that had all the original details the architecture-loving couple had hoped for: exposed beams, hardwood floors, crown moldings, a fireplace. But the inspection revealed an extra $25,000 of necessary renovations. The sellers weren't willing to negotiate, so Jessica and Nick had to back out of the deal. "It was overwhelming," Jessica told Nest shortly after, adding that "nothing else seems to compare."

Now, having looked at roughly 60 houses in the last year, the couple has finally found everything they want in a three-bedroom New Englander-style home in Waterbury. Built in 1860, the well-renovated, move-in-ready structure sits on nearly an acre of land within walking distance to downtown. The one-car garage needs work, but Thatcher Brook runs through the backyard and Jessica notes the hardwood floors, wood-burning stove, beautiful moldings, covered porch and back deck with happiness.

"Out of all those homes, this house by far surpasses anything else we had looked at," she says.

And they found it just in time. "We came to a verbal agreement on another house in Essex," she explains, "and that was also an old farmhouse, [but it] needed to be completely gutted and renovated. We were just about to sign the paperwork when this popped up."

Jessica was out of town, but Nick told her that "this looked perfect, much better than the house we were about to buy," she recalls. "He went the next day, and there were almost 30 people looking at the house. We were nervous, but this was exactly what we were looking for, so we decided we should at least try."

The house was listed at $289,000, which was within their range. But they knew they'd need to put in a higher offer to stand out. They also waived all of the inspections in order to be competitive. It worked. The seller accepted, and, following the appraisal, the couple will move in early this October.

"This is a relief," says Jessica. "We just can't wait to move and get settled and entertain. I feel like we're starting the next chapter, and this is the perfect place to do it."

As thanks for sharing their story with Nest, we're giving Jessica and Nick a housewarming present: a four-hour home-design consultation and $100 gift certificate from Stowe Kitchen Bath & Linens.