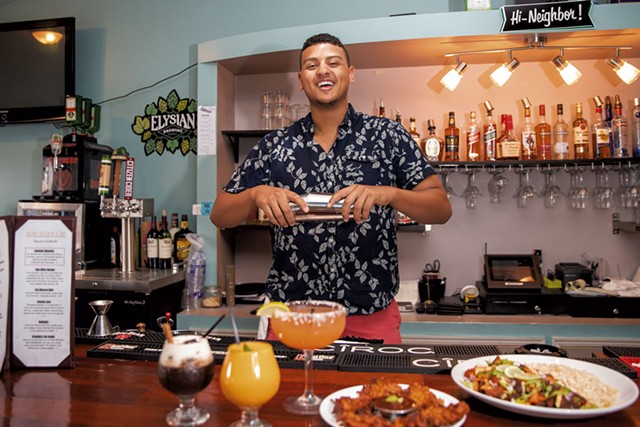 Step inside the red wooden building on North Avenue in Burlington and you'll find an appealing tableau: a pool table; the smells of garlic, ginger and cinnamon; a Miller Lite sign; and probably the friendliest bartender in town.

The pool table occupies the middle room of the building, which is home to Nepali Kitchen & Bar Burlington. The alluring aroma emanates from a small kitchen by the side door. The beer sign shines over the pool table; another one, announcing Bud Light, is aglow in the picture window. The smiling bartender is Kassian Prior, 22, a graduate of Winooski High School who quit his job at Applebee's to tend bar at and help manage Nepali Kitchen.

When Prior isn't talking with his barroom customers on a range of topics — including childhood sax lessons, metaphors, Friday nights and internet searches — he's jotting down ideas for the business on the pale-green pages of a guest-check pad.

"I like being creative, and I get to showcase my creativity here," Prior told me last week at the bar. "I can see how it directly impacts things. And I know he appreciates it."

"He" is Prior's friend Jeetan Khadka, 28, who co-owns Nepali Kitchen with his uncle. A graduate of Burlington High School who spent much of his youth in a refugee camp in Nepal, Khadka opened the first Nepali Kitchen two years ago in Essex Junction. That restaurant is BYOB, and customers routinely arrive with beer and wine, Khadka said.

He decided to capitalize on his customers' drink preference and open a second restaurant, similar to the first one but with a liquor license. For the Burlington restaurant, which opened in mid-June, Khadka tapped his buddy to work behind the bar.

"I like Kassian's energy," said Khadka, noting that Prior also helps out in the kitchen. "He's willing to jump on it."

One of Prior's projects at Nepali Kitchen has been creating a cocktail list to pair with the food menu. It's a work in progress as he experiments with different forms of pairing. This coming weekend, for example, he'll kick off his mimosa and samosa match-up: a twosome bound by rhyme.

One night last week, Prior mixed me his tamarind margarita, a classic pour with a twist that gives it a little heat along with a sweet-and-sour kick. To the tequila and Cointreau, Prior added a shot of tamarind sauce, made in-house by soaking the fruit in hot water, extracting the pulp, and flavoring it with anise seed, chile paste, cardamom and bay leaves. I enjoyed this new (to me) drink with a plate of crispy vegetable pakoras ($4.50). The six fried discs of chickpeas, cabbage and onion came with the same sauce that flavored my drink.

"A big thing I care about is food waste," Prior said. "I go out of my way to try to get [cocktail ingredients] from the kitchen."

Chatting from his post at the bar, Prior noted that his perspective — "two years of legal drinking" — gives him a distinctive outlook on the beverage scene. He's not interested in a glass of Scotch before dinner, he told me. Rather, he wants to devise cocktails that have clever names, such as I Want Maitai Back, and feature ingredients associated with the menu — drinks with a "little bit of a Nepali Kitchen spin."

"As a bartender I'm kind of biased, but I have no problem admitting it," Prior said. "Being 22, I think I notice a lot of the trends. I know what mixes to use and what tequilas."

Khadka, who had served the pakoras, joined us at the bar. The three of us shared a lively conversation that veered in many directions, always coming back to food and family.

Prior, born and raised in Chittenden County, has nine brothers and sisters. He grew up eating shepherd's pie, salmon cakes and pizza before discovering a more global cuisine as Winooski's New American community grew. In addition to working at the restaurant, he is studying for his real estate license. 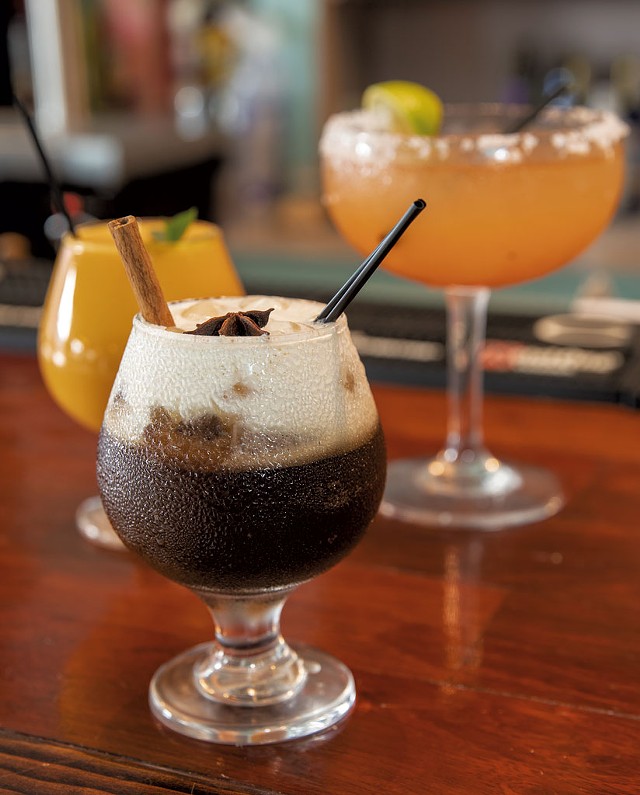 Born in Bhutan, Khadka was a baby when he and his family left that country for a refugee camp in Nepal. He and his wife, Shreepali Rajbanshi, met in seventh grade at a boarding school in Nepal. She cooks and develops recipes for the restaurant but is currently on leave because the couple expects their first child in two weeks.

Rajbanshi's father sends tamarind sauce from Nepal to the family in Vermont. He makes it with butter. "I take a jar and eat it while I'm watching TV," Khadka said.

The butterless version went down easy at the bar in Burlington, and it was time for a second pairing. Guided by the Nepali Kitchen pros — and the name of the drink — I ordered a sharabi lassi. The Hindi name translates as "drunken lassi." The super-smooth cocktail, almost dessert in a glass, mixes mango lassi with coconut rum and Baileys Irish Cream and comes topped with a sprig of mint. The drink's base is Nepali Kitchen's housemade yogurt. (The restaurant also makes its own paneer cheese for a variety of dishes.)

Khadka suggested I try pork choila ($12), a wonderful Nepali bar snack that proved to be a full meal. The stir-fry of marinated pork, chickpeas, black peas and cabbage is served with flat rice. The vegetables and rice were crispy; so was the meat, on the outside, yet moist within. The ingredients were bound by the subtle yet distinct flavors of cumin, ginger, garlic, chili and other spices. Khadka said he hopes to serve choila made with buffalo, a popular dish in Nepal.

Looking up from his note pad, Prior shared some of his ideas for the business. They range from establishing a vendor booth at the Burlington Farmers Market, to crafting a masala mojito, to devising a rating system for customers to judge the cocktails. He is currently at work on a graphic design project to redesign the menu.

"I get to come in with this creative ideology," he said. "Jeetan is the voice of reason."