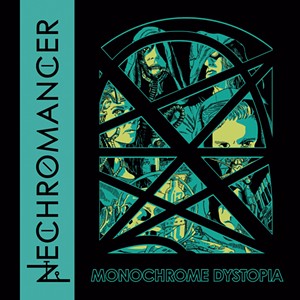 From the bowels of hell come Nechromancer, Vermont's only goth-IBM band. IBM stands for industrial body music, a particularly dark strain of electronica that emerged in the 1980s. As I wrote in my review of the band's 2017 debut, Intersect, "If Fangtasia, the fictitious vampire nightclub on HBO's 'True Blood' had a house band, it would be Nechromancer."

The group returns from its shallow grave with a sophomore record, Monochrome Dystopia. Not much has changed in the two years since the band's debut: The synths are still ice-cold, the guitars fluid, and the beats as volatile and mechanized as ever. And the mood remains sufficiently Satanic. Unfortunately, the LP just doesn't have the same nihilistic charm as its predecessor.

To be fair, I'd rather live in a world with a moderately passable follow-up than a world with no Nechromancer at all. Again, no one else in the state is making anything quite like the black magic this four-piece conjures. But I question the presentation of this album. It contains four new originals alongside two remixes and five "reduxes" from Intersect.

That means that nearly half of the first record's 11 cuts reappear in some form on the follow-up. "Unhallows Grieve" and "Vampire Queen" appear twice. Perhaps the reduxes should have been scrapped or saved for a rainy day, because the production changes seem minimal and lateral. Why not just release a six-track EP?

Synthwave trio Night Protocol remixed "Unhallows Grieve," which means that Matthew Binginot, a member of both projects, worked some production magic on the original. Clean and sleek, the remix shifts the tone away from terror to a neon-streaked, '80s pop aesthetic to great effect.

The other remix doesn't fare as well. "Vampire Queen (Club Remix)" adds spazzy beats that would even nauseate the Roxbury Guys. It's a step in the wrong direction for this tune. The sharp and nimble redux that appears later is much more pleasing — though, again, it doesn't much improve on the Intersect original.

The four originals also fall a bit flat. Opener "Twist of Fate" adequately sets the tone with sledgehammer guitars and wonky synth arpeggios. But the instrumental cut is too long and repetitive.

Of the new inclusions, "High Tech No Life" comes closest to pushing the envelope. Its four-on-the-floor kick drum and dense nest of electronic chirps, surges and waves come together nicely. "Punish Me" sounds too much like an Intersect track without building upon the groundwork. And while vocalist Vile Heathen (Vilarya Marceline) broods like a champ on "Fear of Sanctuary," the über-dance number lacks the voluptuousness of which the band has proven itself capable.

In case you hadn't put two and two together, Nechromancer make some of the most Halloween-appropriate music in all of the Green Mountains. Unfortunately, their latest is merely a spooky background.

Monochrome Dystopia is available at nechromancer.bandcamp.com.