Navy Finally Names a Ship After Burlington — Burlington, Vermont, That Is 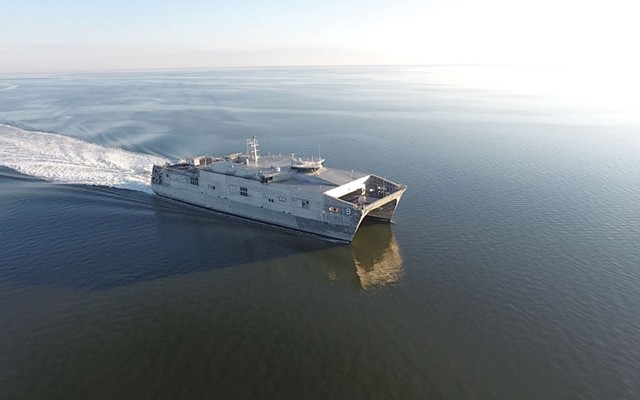 Sen. Patrick Leahy (D-Vt.) and his wife, Marcelle, were on hand Saturday in Mobile, Ala., to officially christen the expeditionary fast transport ship. The senator introduced his wife, who then smashed a bottle of sparkling wine across the Burlington's bow, a tradition meant to bring good luck.

"Vermonters have long heeded the call in service to this nation," Marcelle Leahy said in a statement. "From the original, pre-Revolution Green Mountain Boys to Vermont's National Guard and members of the armed forces today, Vermonters have responded when the duties of the nation have called."

The ship is capable of amphibious landings at shallow ports and features a helicopter pad. It can quickly offload troops — and even a tank — along with hundreds of tons of cargo. Its versatility makes it ideal for military or humanitarian missions, according to the Navy.

"This ship honors Burlington, Vt., a city that embodies American values and its patriotic, hardworking citizens for their support and contributions to our Navy," Secretary of the Navy Richard V. Spencer said in a statement. A spokesman from Leahy's office said the senator had nothing to do with the Navy's selection.

The ship is expected to launch sometime this week. It's still at the Austal USA shipyard in Mobile, where the company is building 12 expeditionary fast transport ships as part of a nearly $2 billion military contract. Most of them will be named after small U.S. cities, including Yuma, Ariz.; Bismarck, N.D.; and Brunswick, Ga.

The original Burlington, an anti-submarine frigate, was in service during World War II. Its Iowa namesake, with about 26,000 residents, sits across the Mississippi River from the Illinois state border and abuts a town called West Burlington.

The ship eventually went south — when the Colombian Navy bought it — and was scrapped in 1968.

It's this Burlington's turn.

The original print version of this article was headlined "We're No. 2!"