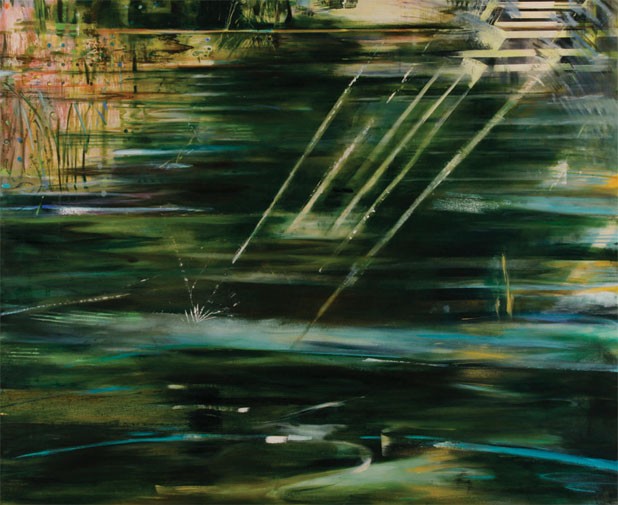 At Comfort Farm on West Hill Road in Stowe, there’s not a barnyard animal in sight — unless you count the bold, larger-than-life portrait of a rooster. That’s one of the works that currently greets visitors to the barn, which is home not to cows or sheep but artists. That is, to several dozen paintings, photographs, prints and sculptures by 11 regional artists. These works hang on the walls or rest on pedestals throughout more than half of this airy, 4000-square-foot structure.

The exhibit reflects the partnership of artist/curator Idoline Duke and curator Gunnel Clarke, who reopened the barn-cum-gallery after a five-year closure to the public. Clarke and her former husband once used the barn as an outpost of Clarke Galleries, located in the village. Now remarried, she lives in the adjacent house, which dates to 1810, and operates her art consultancy business, Eriksson Fine Art, from the barn.

Clarke estimates the barn’s age as “probably 180 years old.” Though heated, its gallery is closed in winter. Noting the snowy roads and skimpy traffic, Clarke says, “I don’t want to be confined to sitting here to have one person coming in once in a while.” But during this year’s foliage season, she adds, visitors have been steady.

“We used to have three or four exhibits a year here,” Clarke says. “I decided to do this with Idoline because we have all these wonderful artists.”

From the outside, the barn looks tidy but rustic, as a farm building should. Step inside the entrance and … it still looks like a barn, albeit a very clean one: The pine walls are weathered, the floorboards uneven. Farther in, the floor slopes toward large double doors — a ramp for the animals that once lived here. But around the corner and a few steps down, the other side of the barn has been transformed. Here are smooth walls painted a rich green; a golden-colored, poured-concrete floor; a high, white ceiling from which spotlights hang strategically, illuminating the artwork. Only the dark exposed beams betray the building’s origin.

This exhibit is titled “In Our Nature,” and so it is no surprise that all the artists here — many of them represented by Clarke — are inspired by the natural world. These are artists who look for beauty and re-create it. All the works are high in quality and visually pleasing, even soothing. Beyond that, they vary wildly.

Don Ross’ pristine, large-scale photographs of abandoned quarries, though exact representations of reality, are contemplative studies in form and composition. They invite the viewer to consider the passage of time, perhaps of human exploitation on the land. Most of all, they visually convey an almost eerie quietude.

Not so Henry Isaacs’ lively paintings. His vivacious and generally large-scale nature scenes employ bright hues and brushy, impressionistic strokes. These works nearly vibrate off the canvas — if optimism had form, this might be it. Similarly, Bunny Harvey renders landscapes with an uncanny charge, as if she sees, and is driven to reveal, not just the physical but the metaphysical world. With skilled tricks of the brush, Harvey presents minutely observant depictions of nature and its energetic essence.

Jane Parkes (Duke’s sister) takes an altogether different tack, using found bits of wood from ocean’s edge: She carefully paints them with stripes of marine colors or all white, and arranges them in wall-hung vitrines, boxes or ropelike mobiles. No doubt turning innumerable beach walks into art-minded scavenger hunts, Parkes calls her serendipitous detritus to order in satisfying patterns.

As for Duke herself, that aforementioned rooster is one of her large watercolors. Her other pieces in this exhibit are more botanical, but each is a rendering of a single item — a thistle, a curvy piece of coral — starkly contrasted against white paper. Deceptively simple, Duke’s subjects invite viewers to focus, as if on a mandala, and ponder the life-form she so delicately renders.

The opposite of these ethereal pieces might be the bronze sculptures of Jim Sardonis and Sharon Wandel, whose works give 3-D heft to botanical and avian figures, respectively. Wandel’s birds are perched in nooks throughout the gallery, like plump little squatters. These and other works here convey the sense that, at Comfort Farm, the outdoors has been let in.

“Being in the barn and having this beautiful meadow in the background,” says Clarke, “it’s all in nature.”

“In Our Nature,” at Comfort Farm in Stowe, through October 14. erikssonfineart.com