Tunbridge artist Elizabeth Billings had been aware of the Nature Conservancy for years but had never visited one of the 58 natural areas it has preserved in Vermont. That is, until she received a call from the Vermont chapter asking her to be its first artist-in-residence.

Billings said yes and last September began exploring the three preserves that will feature her art installations at the end of the residency, in May: LaPlatte River Marsh in Shelburne; Raven Ridge, which spans parts of Charlotte, Hinesburg and Monkton; and Equinox Highlands in Manchester. Now she visits one of these every week, taking notes, photos, tree rubbings and more as she gathers inspiration.

"I'm just loving doing it," Billings said during a recent phone call. "I didn't know these places were there. And there are so many other natural areas they've preserved. It's amazing. It's opened up a whole world."

Based in Montpelier, the Vermont chapter of the Nature Conservancy has conserved more than 300,000 acres of land across the state since its founding in 1960. That makes the organization the second-largest landowner in Vermont, according to Catherine Newman, the Vermont chapter's director of philanthropy.

The Conservancy's mission is to preserve land from development while also creating access to it through trails and boardwalks — though no dogs or bikes are allowed. Sometimes that access is limited in order to keep wildlife corridors intact and protect rare plant and animal species. Equinox Highlands Natural Area's 1.5-mile round-trip walking trail, for example, takes up only a small fraction of the 2,600-acre preserve.

At LaPlatte River Marsh Natural Area — not to be confused with LaPlatte Nature Park, which is owned by the Town of Shelburne and lies on the opposite side of Route 7 — a 1.5-mile round-trip trail brings visitors about a quarter of the way into the 230-acre preserve.

And at the 365-acre Raven Ridge Natural Area, visitors enter on a 0.3-mile handicap-accessible boardwalk, elevated just above the marshland grasses and ending in a deck overlooking a beaver pond. A 2-mile round-trip hiking trail branches off the boardwalk to access the ridge overlooking the valley.

When Billings visits one of these trails, she wrote in an email, "I spend most of a day [there], and the unexpected always happens that lifts me up and out of myself and into the place. Sometimes it is a conversation with another visitor, or even the way someone says 'Hi,' or just the smell of the woods. It might be the snow falling off a tree with the sun behind it turning the little flakes into sparkles."

Billings isn't the only one who's found enchantment in these places. During the pandemic, Newman noted, visitorship to Nature Conservancy areas has soared. "We kept consistently hearing how people were finding respite and some of that joy that we felt before COVID" at natural areas, Newman said.

On the Conservancy's 60th anniversary, its staff decided to dedicate an anonymous donor's gift to honoring that connection between people and nature. Titled "Together: Nature Unites Us," the art project is meant to give back to the chapter's roughly 10,000 members — the most per capita of any state's chapter, according to Newman. The staff chose three of its 11 flagship natural areas — popular spots with important ecology and wildlife — and gave Billings a call. 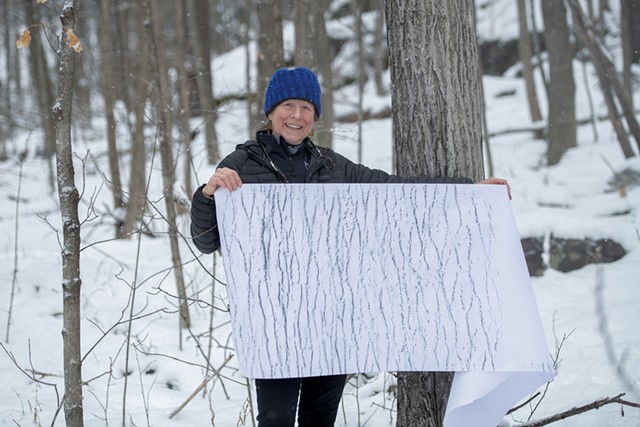 A native of Woodstock, Billings studied weaving in Japan, in Kenya and at the Cranbrook Academy of Art in Michigan. She specializes in collaborative public art installations around the country that highlight the sites' natural elements. In Burlington, she is best known, with collaborator Andrea Wasserman, for an installation at the Burlington International Airport titled "Maple, Apple, Birch" that features panels of carved wood and woven veneer.

Eve Frankel, director of strategic communications for the Conservancy's Vermont chapter, had seen and admired Billings' 2017 project with Wasserman and Evie Lovett in Brattleboro, titled "From the River, to the River." The series of outdoor installations honored the town's connection with the Connecticut River.

While Billings' public art is typically planned well in advance through the collaborative process, her conception of the Conservancy installations "forms and shifts as I'm making it," she said. Now halfway through the residency, she is taking her time absorbing the three natural areas' sights, sounds, air and, especially, patterns.

In a video presentation she created in December for the Conservancy, Billings describes her process: "The patterns hold me — their endless variety, their ability to seem the same and yet always be different." She points to the patterns made by Christmas ferns, each frond attached to the stalk by a stem that's offset rather than centered. During the phone call, she described herself as a "pattern maker" who "works in wood, glass — whatever the place needs."

Later, in an email, Billings wrote about observing the shadows at Equinox Highlands: "It was stupendous ... There was enough snow on the ground to make it feel all covered. The sun came out and the woods became a vast canvas of stripes."

"Look at the branches, leafless, in the sky. The patterns are endlessly beautiful." Elizabeth Billings tweet this

The artist has specific recommendations for visitors to each of the natural areas. At the Equinox Highlands, she suggested looking for the "huge aspens and all the fallen trees there, too — they make amazing patterns. The energy there is rejuvenating." At Equinox and Raven Ridge, Billings advised looking for tip-ups — downed trees with their root systems exposed like a wall. At Raven Ridge, it's the ledges that excite her. "Take the lower path," she recommended.

And at LaPlatte, look for "the beeches, and the curves of the river. The ice, yes, the ice! Talk about patterns. And look up, look at the branches, leafless, in the sky. The patterns are endlessly beautiful."

Billings is still pondering the forms her installations will take, but she divulged that LaPlatte's will be a live-edge bench whose curve will echo the river it overlooks. At present, she is creating seasonal journals filled with sketches and notes that the Conservancy will publish on its website. The aim of the project, Billings said, is "to work with the hills, the trees, the rock formations. It's harmonizing with the landscape and accentuating aspects of it, helping you to pay attention in new ways."

She encourages visitors to do their own looking in the meantime: "Mostly, I would say, just go," Billings said. "You never know what will happen, but you will feel so much more whole after being out and about — connecting, looking and listening. Why is it so easy to forget that?"