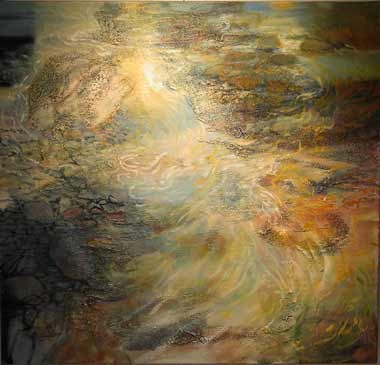 Janet Fredericks is one of Vermont's strongest and most experienced painters. As her current exhibition, "Daily Beauty, Quiet Observations," at Shelburne's Furchgott Sourdiffe Gallery demonstrates, even her most abstract canvasses are rooted in the natural world. At her best, Fredericks distills naturalistic shapes and rhythms into coherent, formally engaging statements that are both sophisticated and decorative. Color, embellishment and patterned mark-making often fill her paintings with delightful passages of sheer aesthetic joy. In this show, however, only about half of the 15 pieces rank among Fredericks' finest.

The Lincoln-based artist is particularly inspired by water. In her artist's statement, Fredericks says: "The water paintings evolve from my interest in and observation of the New Haven River, probing the essential surface patterns, light and the rock forms beneath." The 27-by-20-inch canvas "Rivers Beneath Rivers" realistically renders the water's eddies and currents with an abstract vocabulary of fluid lines and chromatic patches of varied intensity. Here Fredericks' palette is limited to beige and pale blue. Colors subtly recede into the picture plane as her stringy, energetic, white and black currents seem to sweep forward in a contrapuntal motion.

Two large vertical pieces, "Woodland-New Haven River #1" and "Woodland-New Haven River #2," are mixed-media riparian images. They are steeped in Asian design, yet totally original. The 29-by-59-inch compositions capture rushing rapids in further flurries of black and white lines tumbling over stones. The stones are described by loose contour lines. Again, Fredericks used spare, transparent colors rather than fiery harmonies to ensure that the tangled lines describing the river's flow are the painting's focus.

Less potent than these works is a series of watercolors and giclée prints that are just a little too cute. The 22-by-30-inch "Garden Visitors" depicts a happy fantasia of flowers and leaves infested by butterflies, rapacious little birds and squishy caterpillars. Scribbled haiku-esque writings about how lovely the world is further clutter the idyll, as does a red Asian-style character stamp.

An even larger stamp seems to bushwhack the smaller watercolor "In the Back Yard One Day." Replete with leopard frogs, dragonflies, meadow voles and a well-fed snake, the 11-by-15-inch work is devoid of the gutsiness and originality that make Fredericks' heftier canvasses so exceptional. She isn't a bad watercolorist; she's just got some distracting baggage in these journal-like, illustrative pieces.

In contrast, "Promises of Spring-Red Maple Bud" is a superb 30-by-22.5-inch oil executed to Fredericks' highest standards. It's composed on a slightly diagonal axis, with crimson flowers and orange shoots resting left of center, surrounded by a palpable atmosphere of layered blues and greens. The paint is thick, and Fredericks seems to be searching for form rather than just painting a picture.

The narrative of "Red Twig," a 40-by-28-inch oil on canvas, could be seen as a stick leaning into a clear, rushing stream. But it's really about layers of space: Glowing, light-blue brush strokes, dragged over a translucent streambed of greens, gold and white, float gently around the gracefully curved twig.

It might be an overstatement to say that "Daily Beauty, Quiet Observations" contains the best and worst of Janet Fredericks' paintings. Let's say instead that, given the strength of her best, the others can be overlooked as just a hiccup.