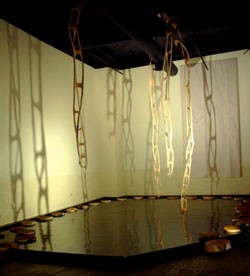 It’s not unusual for colleges to host visiting artists, but the whole town of White River Junction appears to be hosting South Korean sculptor Bong-gi Park. He’s installed a brilliant, large-scale installation at the Cooler Gallery, and intends to produce two monumental outdoor pieces in and near the village over the next few weeks.

Cooler Gallery Director Gaal Shepherd met Park during his 2005 fellowship at the Vermont Studio Center in Johnson, and she invited him to construct a piece in WRJ. Shepherd also began working on the town permits needed to let him do so. A government grant from his home country enabled Park, 41, to return to Vermont for two months. He’s tirelessly putting that time to good use.

The main ingredients of Park’s untitled indoor piece are light, shadow, reflections, water and wood. He began by selecting four birch trees that could be easily toppled with their root balls intact, and then carved the trees into segmented, gracefully twisting forms with a chainsaw. The birches are now hung upside down from the 14-foot-high gallery ceiling.

Park’s next step was to fabricate a 5-inch-deep pool underneath the hanging trees. Both ceiling and pool bottom are black; the gallery walls are painted white. Twenty-nine thick birch tree-trunk slices form stepping-stones around the inner edges of the roughly 20-by-15-foot pool. A carefully placed light illuminates gallery walls with eight large shadows of the hanging trees, and shimmering reflections appear when the water is stirred. It’s a dramatic, yet meditative, piece.

If all goes according to plan, Park’s outdoor artworks will be completed by mid-November. One would be a sizable artificial island on a bank of the White River — right behind the eclectic Main Street Museum. The audacious design calls for dozens of piles to be driven into the streambed and covered with vegetation. In the tradition of many Land Art sculptors, Park uses natural materials — often just wood and soil. In downtown White River Junction, a standing, crescent-shaped piece, also of natural materials, is proposed for the site where a burned-out strip club once stood. Townspeople gladly approved the plan. Park’s sketches suggest his Vermont works will be just as impressive as projects he’s produced elsewhere around the world.

Many of Park’s creations, often simply titled “Breathe,” reflect his environmental concerns. A 2003 piece consisted of a tortoise-shell-like wooden form nestled in a “den” of twigs, sticks and saplings within a degraded area of a South Korean woodland that had become devoid of wildlife. In 2006, Park melted a 30-foot-long boat-shaped opening in the ice of a broad stream that had been bisected by a road. He laid 12 oars around the boat shape and oriented it in the direction of the stream’s diminished current.

Other Land Art sculptures by Park are primarily playful. A “Breathe” piece in Noosa, Australia, was an undulating, ribbon-like dock slung about 50 feet into an estuary over a wooded, tidal beach. A piece sited in Germany called “Neighbor-Breathe,” which appears on Park’s website — user.chol.com/~parkbonggi — is a wide mound of sticks and saplings. But it has an opening in the shape of a long furrow; in the pictures, children are exploring the mound’s curved interior. Park set branches and small logs perpendicular to the direction of the furrow, and then apparently tunneled through them with a chain saw. The resulting interior walls look like a matrix of wood cross-sections of various sizes. (While this is nearly impossible to explain in words, the curious can check it out at user.chol.com/~parkbonggi/e_ frame.html.)

For South Korea’s 2006 Busan International Biannale, Park departed somewhat from his use of natural materials to recreate a group of three “luxury high-rises,” about 10 feet tall, from concrete in a vacant lot near the actual apartment buildings. He’s translated the title of the piece as “A two-picture program,” and photographed it with the real high-rises in the background. In what may be a wry comment on those buildings, Park’s façades seem somewhat roughed up and worn. He also filled the structures with dirt — a conscious contrast to the apartments’ well-heeled residents.

Considering Park’s Cooler Gallery installation along with his past achievements, it seems likely he’ll pull off his ambitious river piece and in-town sculpture by the time he’s due to leave next month. “Failure” just isn’t in the artist’s limited English vocabulary.