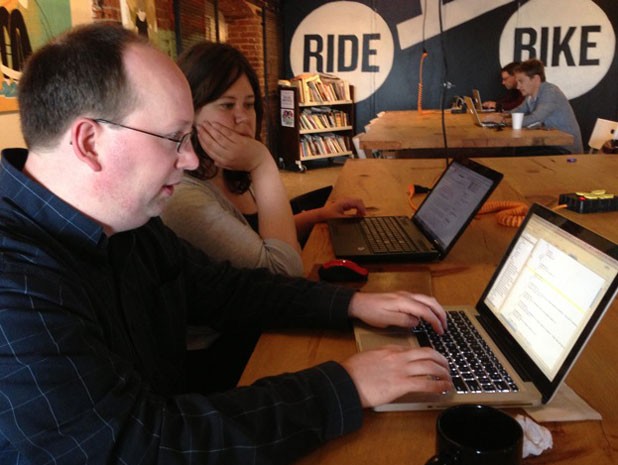 This weekend, even the White House will encourage American citizens to start hacking. But don’t go changing the password to your email and Facebook accounts. The government isn’t endorsing the kind of hacking that wreaks havoc; it’s promoting “civic hacking,” a new kind of collaborative coding that aims to produce technology to improve communities.

“Civic hacking,” explains Amy Kirschner, founder of the Vermont Businesses for Social Responsibility Marketplace, “is a way for people to get involved in government and their communities using technology.”

The idea is simple: Citizens work together with their local, state and federal governments, as well as with private-sector organizations, to solve problems. More than 5000 people — some professional coders, some techy dabblers, some hacking virgins — are expected to participate throughout the country in the first-ever National Day of Civic Hacking this weekend.

Kirschner and Bradley Holt, cofounder and web developer at Found Line, a Vermont-based communications firm, are collaborating with Vermont music promoter Big Heavy World to bring this national event to Burlington’s Maglianero Café on June 1 and 2.

So what will participants actually do all day — actually two whole days? Working in teams or individually, they’ll build prototypes for civic apps, such as an app that can be used to preserve and promote local music. They’ll also likely repurpose civil apps that have been successful in other cities, and brainstorm new uses for open data from municipal governments.

The Burlington event also marks the launch of Code for BTV, a new local chapter of Code for America. Similar to Teach for America, the national organization connects coders, designers, organizations and local governments in an ongoing effort to build and deploy community-minded apps.

Seven Days spoke with Holt about this weekend’s hackathon and what it means to hack for the common good.

SEVEN DAYS: What are a few examples of civic-hacking apps and websites that exist elsewhere and might also work in Vermont?

BRADLEY HOLT: One popular open-source civic app that could be used here is Adopt-a. It started out as an app called Adopt-a-Hydrant, and has been used in both Boston and Anchorage, among other cities. Adopt-a-Hydrant lets individuals claim responsibility for shoveling out a fire hydrant after it snows. The same application has been adapted as Adopt-a-Sidewalk in Chicago and Adopt-a-Siren in Honolulu for people to listen during tsunami-alert siren tests and report any problems.

Another example is Textizen. This is a service that opens civic dialogue through text messaging. A local government, agency or department can design a survey with its own phone number. The phone number gets printed on posters or signage around town with a simple starting survey question to which individuals can respond via text message. The individual can then respond to follow-up questions, turning each response into a conversation.

SD: Do participants need to be technologically savvy in order to contribute to the hackathon?

BH: No. We want to encourage people of all skills and skill levels to participate. We will have workshops for those who want to learn new skills. Teams composed of members with a range of skill levels are encouraged. The idea is for us all to learn from each other. We’ll also have demos for those who are just curious about what we’re doing.

I should also note that this is a noncompetitive hackathon. Our focus is on inclusivity and collaboration. We want people to work together to improve their communities through technology.

SD: What about Code for BTV? What are you hoping to achieve with that new group?

The initial campaign of Code for BTV will involve building a set of web apps for Big Heavy World, a volunteer-staffed nonprofit dedicated to preserving and promoting Vermont-made music. These apps will be part of a redesigned bigheavyworld.com, a website providing resources and community building for Vermont-based musicians and music fans. Initial prototypes will be developed during the National Day of Civic Hacking. After this event, the campaign will move forward with its goal of developing, deploying and maintaining apps for Big Heavy World based on these prototypes.

SD: The national event is only two days long, which doesn’t leave much time for an entire app or website to be developed. What is the primary goal of Vermont’s civic hacking event?

BH: Our primary goal is to build community and a culture of civic hacking. As for tangible outcomes, we’re encouraging teams to focus on building prototypes rather than full apps. There are many challenges facing our communities and we don’t expect to solve every problem during a two-day event. Instead, we want participants to walk away with inspiration and a vision for how they can help improve their communities.

We encourage participants to stay involved in Code for BTV in the months and years following the hackathon. We hope that the civic hacking during the National Day of Civic Hacking will continue on well into the future through Code for BTV.

The original print version of this article was headlined "Conscientious Coders"