Nat Baldwin Talks Bass, Basketball and His New Album, In the Hollows 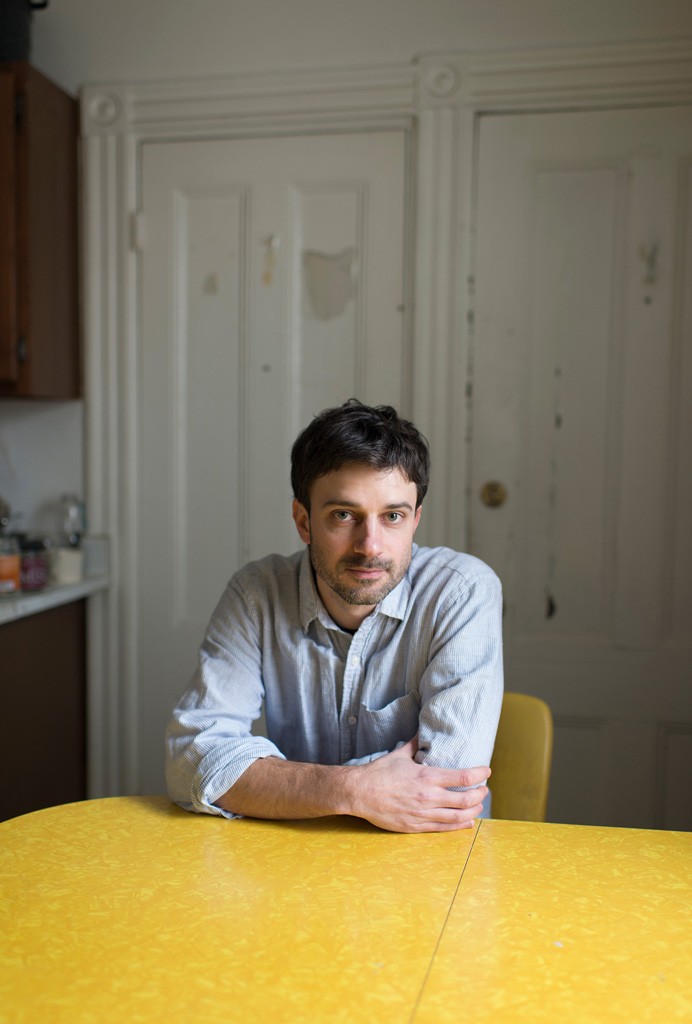 On his new record, Nat Baldwin wanted to find consistency. Written while the Dirty Projectors bassist was training for a marathon at his home in Kittery, Maine, In the Hollows is a product of his twin passions: art and athletics. Baldwin would train in the morning, immerse himself in the novels of Nabokov, Ben Marcus and Flannery O'Connor while he recovered in the afternoon, and then work on music into the evening. The result is an album rooted equally in discipline and emotion, and whose song cycle reflects Baldwin's curious spirit and methodical nature.

As with his earlier solo works, the arresting pop suites on Hollows center around Baldwin's prodigious instrumental skill and reflect the influence of his avant-garde-jazz background. But they are also deeply intimate pieces whose varied themes are given life amid wandering vocal melodies flecked with spectral strings and percussion. The songs are both engaging and challenging, offering riddles for inquisitive minds and comfort for tired souls.

This Saturday, May 3, Baldwin will perform with Vetiver drummer Otto Hauser at the Winooski United Methodist Church as part of the Waking Windows 4 music festival. In advance of that show, Baldwin spoke with Seven Days by phone about his new release, his background and the link between music and basketball.

SEVEN DAYS: You come to Vermont pretty often. I gather you like it here.

NAT BALDWIN: I love it. I think the first time was in 2008, and I've been coming back consistently ever since. The Angioplasty Media guys always treat me great. And I've met a lot of cool people through them.

SD: I hear they made you a bacon cake for your birthday recently. Tell me that's as awesome as it sounds.

NB: [Laughs] It is. That was amazing. It works better than you might think.

SD: I see Ryan Power is opening your hometown show.

NB: Yeah, I've known Ryan for years. We played together the first time I played in Burlington, and we've become really good friends. So I asked him to come do the album-release show in Kittery. He's been here a few times now, and people freak out about him. He has a strong fan base here. He's a very talented guy.

SD: Speaking of the new record, was there anything specific you were trying to do or get across with it?

NB: I wanted to make something that was a little more consistent than my past records. In past records, there was a wider spectrum of things happening from song to song. I hadn't written a batch of songs all at once before. So after a couple of months of writing, these songs seemed to fit together nicely. There is a spectrum of ideas within the songs, but they're linked.

SD: There seems to be a sonic consistency, too, especially in the string arrangements.

NB: That's Rob Moose from yMusic. He did some arrangements for some of the first songs I had written for the album for a festival we were playing, and I loved them. So when it came time to record the album, I asked him to bring those arrangements and if he wanted to do more. He was into it.

SD: Your solo music can sometimes be rather spare, instrumentally. Was there a concern of overdoing it with the strings?

NB: I didn't want the arrangements to take away from the intimacy of the songs. I want it to still feel like a solo record with little adornments here and there that accent and punctuate certain parts. I love listening to solo music. It can be really powerful, especially live. But for an album, for the definitive recordings of these songs, 45 minutes of just solo bass could potentially be kind of challenging. So having really simple but nice arrangements that buoyed the feeling of the song, to move things along, I think it worked.

SD: How did Otto Hauser fit in on drums?

NB: Most of my music is cyclical and already has a repetitive rhythm happening. So it's sort of obvious how drums would work, but almost too obvious. It's hard to imagine sometimes what drums would do to it. Or maybe, it's hard to imagine them not doing something super obvious. But he seemed like somebody who could do something interesting. So we came up with some really simple parts, minimal stuff that added something to the song and fit in the framework and approach.

SD: In concert, it's just you and Otto. How much do you have to adjust from the album versions of songs to a live setting?

NB: It's just been me solo for a long time. So just adding one person is going to be cool. And the string arrangements ... the songs were already the songs, and the strings came after. I haven't figured out how to incorporate them in addition to the other stuff I have to do. And in the smaller, intimate places we're playing, hopefully the energy of the live performance will translate. So it makes sense to play kind of stripped down. And it's a hell of a lot easier to tour that way.

SD: How has your jazz background informed your music with Dirty Projectors and your solo work?

NB: At this point it's kind of subconscious, stuff that's embedded over the years. It just becomes a part of you, your musical identity. Whatever you're doing, it's a confluence of everything you've studied and experienced in the past. I don't ever think consciously of how I can incorporate aspects of jazz or avant-garde music into stuff I'm doing now. But it probably does seep in there somehow. Like, when I'm singing, coming from a jazz background, I'm thinking a lot about phrasing, working with and against the time in music, going behind the beat or rushing the beat. It's all things that I thought about while studying jazz, and though I'm not consciously thinking about it while writing a song, it's become part of me as a musician.

SD: Before you got into music, you were a serious basketball player. Do you see a connection between music and sports?

NB: Well, in Dirty Projectors there are six people. There are five people on a basketball court and we can say, on average, there are about five people in a rock band, maybe four. So everyone has their defined roles in a band, which is similar in basketball. Everyone has their positions and the role they play within the team concept. So just that simple idea is a very direct correlation. You've got the lead singer and the lead scorer. There's the rhythm section and the guys setting picks and rebounding. As long as you know your role and are aware of how it fits in a team framework, or a band framework, it will ultimately lead to greater success.

The original print version of this article was headlined "Low Anthems"