Nastee, The Album B4 The Album 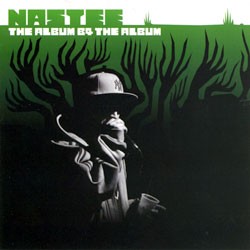 It is safe to say that Vermont hip-hop has arrived. No longer resigned to niche status, the 802 boasts a thriving statewide community of homegrown MCs and DJs, running the gamut from the Aztext to DJ ZJ. It is interesting, then, to take a step back in time to illustrate how far the genre has come, at least locally. With his debut solo album The Album B4 The Album, Queen City hip-hop ambassador Nastee has done just that, unleashing a gripping collection of older material written and recorded over the last several years while the venerable MC was otherwise focusing his efforts on his work with the noted collective VT Union.

“Just Say” introduces the record, and reintroduces Nastee as a clever, technically skilled rapper. His gruff, blunted delivery is seductive, to the point that one could overlook his sly, challenging flow. Don’t. Dude’s got skillz, which is especially evident during sneakily lolling verses. Where previous VT Union releases err on the side of “throw your hands up” club anthems, Nastee takes a more subtle, dare we say philosophical, tone when left to his own devices. He faces social and political issues with tact, daring and charm.

If Nastee has a flaw, it’s a tendency to oversimplify choruses. Where the MC’s wordplay during verses borders on the acrobatic, rudimentary flow at the hook lacks the anticipated release, almost to the point of pandering. You could argue the tactic is meant to create contrast, which it does. But following the whip-smart observations that largely define the record, it’s hard not to want a more intellectual payoff at what should be each song’s apex. “It’s Nastee” is perhaps the most egregious offender, the hook here consisting solely of “It’s Nastee, it’s your boy Nastee,” ad nauseum.

But this is a minor gripe, especially when considering the work as a whole. More often than not, our boy Nastee delivers the goods. Even dated diatribes against the Bush regime (“Message,” “War”) hold up and — sadly — maintain relevancy in Obama’s America.

Nastee is best known as an MC and DJ, but he is equally impressive as a producer. Throughout The Album, his beats are crisp and entertaining. “Cutz and scratchez” from longtime collaborator DJ A-Dog don’t exactly hurt, either.

Though at times rough around the edges, The Album B4 The Album is an intriguing glimpse into Nastee’s evolution as an artist and, by extension, the evolution of the scene he has helped to cultivate.

The Album B4 The Album is available at CDBaby.com. Catch Nastee and DJ A-Dog at their weekly “True School” residency every Wednesday at Nectar’s.