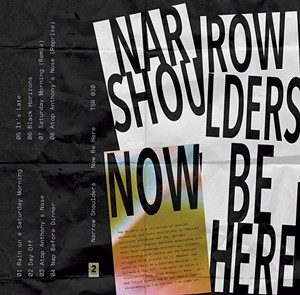 "Past and future always tug at our mental fabric, threatening to rip the rug from under us." So concludes the brief description that accompanies Narrow Shoulders' Now Be Here, a fleeting, experimental journey of impressionistic soundscapes and low-key trip-hop. Its creator, Twosyllable Records founder Zach Pollakoff, layers clarinet, synths, guitar and field recordings to form nebulous instrumentals.

A recent Vermont transplant, Pollakoff took up residence in Charlotte in 2020. In addition to making music and running a label, he's an executive producer at Heavy Duty Projects, a creative firm specializing in music publishing, production and supervision. His portfolio showcases his knack for using music to support and emphasize brand messaging.

Pollakoff does something similar with Narrow Shoulders, orbiting the concept of "familiar quotidian scenarios," as he put it in a press release. He aims to encapsulate inherent psychological and emotional responses to slices of life that might seem trivial or forgettable. Song titles such as "Day Off" and "Nap Before Dinner" indicate the dusty, unconsidered corners he wishes to explore. And he does so with care and ease.

Though available digitally, Now Be Here sounds best on cassette. The noises produced by sliding it into the deck, pressing play, the tape slowly unspooling from one reel to the other, and the forceful ka-chunk of auto-reverse blend with the album's contents. The format enhances the work.

The elements Pollakoff gathers together push against each another as much as they contract inward. Familiar, commonplace elements — such as gently picked acoustic guitar — ebb and flow, wandering in and out of coherence. Pollakoff frequently centers his clarinet, with its round, hollow tones, on sound portraits made of hissing noise or cosmic synths.

The clarinet is a difficult instrument. (I know this from personal experience, having played it in fifth grade before switching to the much easier alto saxophone in sixth.) It's also one that's difficult to separate from its associations in klezmer, jazz and classical music. By making it the melodic lead in an unconventional sonic space, Pollakoff actively works to break those associations.

Side A moves through the amorphous "Rain on a Saturday Morning" into therapeutic sojourn "Day Off," the contrast like an impenetrable fog burning off to reveal a sun-dappled pond. "Atop Anthony's Nose" — a stargazing pinnacle like the mountain in the title — dissipates as it transitions into the deadened drone of "Nap Before Dinner."

Pollakoff's experimentalism shouldn't alienate those who prefer pop or more mainstream sounds. By cherry-picking universal elements of songcraft, he creates a welcoming space in which it's easy to find comfort.

Now Be Here is available at narrows-houlders.bandcamp.com.