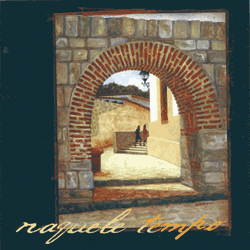 While Naquele Tempo's musical loyalties are varied, the Burlington quartet strays sufficiently south of the border to earn them a perennial slot in Vermont's Latin Fest. Unlike local revelers GuaGua, however, the Tempo lack those vibrant, sangria-soaked beats our northern hips crave. You could blame it on the bossa nova, but it's really the flute that capsizes this earnest Latin effort.

Co-producers Rafael Flores (guitar) and Dominique Gagné (flute) are able instrumentalists, but they can't find the material's exotic pulse. Instead of sexy samba or cool Rio jazz, they mine toothless 19th-century fare such as Brazilian Choro and Cuban Danzon. With such distinctive Old World stylings, Naquele Tempo sounds like Putumayo-light. It's clear where tracks like "Yama Yama" — born of bright clave and breezy flute — are headed long before they get there.

One exception is the seemingly saccharine "Brasileira," which winds lazily through two minutes of easy listening — and irksome egg shaker — before flaring into faux flamenco. When it shapeshifts, the transition is nearly imperceptible, as if suddenly, mid-mambo, we're swept into the arms of an expert dancer. It's incendiary — until the flute returns like a chaperone to smolder our desires.

"Sofie's Son" matches the hand drumming of Dartmouth's Hafiz Shabazz with Bonnie Anderson's bevy of shakers — she rocks an African gourd, among other percussive oddities. Here, the band starts to stretch, but hesitates — afraid of crowding the flute? — in a salient example of Gagné's hegemony. The girl's got chops, yet even she fails to elevate the pipe beyond its conventions.

The band follows with the impossibly medieval "Pañuelo y Adios," a sylvan processional that nearly sinks the album. But the Tempo bounce back with "3 on 6 Djandjo," an impressive Afro-groove tune that seems to nod at the late, great Fela Kuti. Jeremy Hill's bass induces a funky jungle vibe, and Flores plugs in for the disc's first jolt of electric guitar. It's got cojones, and proves a welcome detour.

Naquele Tempo's prowess is unquestionable, but the surfeit of dreamy flute is sure to test anyone's tolerance for woodwinds. The instrument's timbre is simply too monochromatic to sustain nine tracks. Likelier to sedate than to incite, this mild brand of jazz will leave Latin fans hungry. Still, some compositions — such as the briskly paced "¡Se Acabo!" — are not without their charm. So pour yourself a caipirinha, find a hammock, and enjoy.