Art Review: "Napoleon on the Nile: Soldiers, Artists and the Rediscovery of Egypt," illustrations from Description de l'Egypte and other artifacts. Fleming Museum, UVM, Burlington. Through December 18. 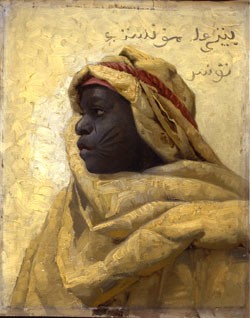 American forces did nothing to protect Iraq’s ancient treasures, nor did they show much respect for the country’s contemporary culture, when they invaded in 2003. A different ethic was evident 200 years earlier when another powerful nation tried to conquer a different Islamic land.

General Napoléon Bonaparte waged a war of aggression against Egypt beginning in 1798, but the French commander brought along a coterie of scientists, artists and engineers in addition to a 25,000-strong colonial army. These “savants” studied the decaying splendors of the pharoahs and documented the customs, crafts and appearances of the Egyptians they encountered during the course of what would prove a failed military campaign.

The results of the savants’ research were published in the 23-volume Description de l’Égypte, which took nearly 30 years to compile. About three dozen engraved illustrations from that monumental work of scholarship form the core of “Napoléon on the Nile,” an absorbing show at the University of Vermont’s Fleming Museum.

French artists’ wonderment at the works of the ancient Egyptians, and their uncondescending curiosity about Muslim ways of life, are apparent in these detailed, almost photographic images.

Not surprisingly, many of the engravings, along with several oil paintings included in the show, focus on subjects that Europeans of the time would have regarded as colorfully exotic. There’s a depiction of an electric catfish, for example, said to kill its prey with a 350-volt jolt. Snake charmers, crocodiles and topless female attendants are represented as well.

But most of the engravings record everyday objects, such as baskets and lanterns, or present realistic panoramas of Cairo and Alexandria. The pyramids and Sphinx are also chronicled, as are the half-ruined glories of Memphis, Luxor and other ancient cities.

Although the exhibit was organized by the Dahesh Museum in New York City, UVM happens to own one of about 1000 extant copies of Description de l’Égypte. It’s partly for this reason that Fleming curator Aimee Marcereau DeGalan is delighted to have brought “Napoléon on the Nile” to Burlington.

Owing to space limitations, UVM’s version of the show is much smaller than the original. But Marcereau DeGalan says she was careful to choose “the best of the best” for the Fleming. And visitors may find that the number of works packed into four sizable rooms of the museum is quite sufficient, since the many text panels, and sections devoted to letters and other documents, demand considerable concentration.

Marcereau DeGalan says the show “will appeal not only to lovers of fine arts but to history buffs.” And she’s right. The course of Napoleon’s three-year campaign is chronicled, with attention paid to key combatants on both sides as well as to battles and geopolitical intrigues. And a few of the Orientalist-style paintings created later in the 19th century do qualify as accomplished works of art.

Particularly notable is the Scottish painter Joseph Farquharson’s scene of Egyptians sitting amid the toppled columns and scattered stones of Luxor. The painting looks as though it were composed during a solar eclipse; a dim overall light casts the figures in eerie shadows.

Striking, too, is Rudolf Ernst’s view of the courtyard of a metal workshop in which a standing craftsman chisels an intricately patterned bell while a seated companion uses pliers to serrate the edge of a disc. A 21st-century American eye may be drawn to the skin color of many of the subjects in these Orientalist works. The main metal worker in Ernst’s painting, for example, has an ebony complexion, suggesting he may have migrated to the Middle East from sub-Saharan Africa.

Similarly, tribal scarification is shown on the left cheek of the burnoosed black man featured in “Portrait of a Nubian” by the Danish painter Pieder Mork Monsted. Imagined images of Cleopatra, by contrast, consistently depict her as light-skinned.

“Napoléon on the Nile” is accompanied at the Fleming by an amusing collection of kitsch entitled “Egyptomania.” A private collector lent the pieces for this show, which highlights pop culture’s fascination — then and now — with all things Egyptian. Napoléon’s campaign kicked off a long-lasting craze for consumer items with designs based on obelisks, camels, dashing Bedouins and, of course, Cleopatra. Barbie is here, for example, in her “Princess of the Nile” incarnation.

Egyptomania was further stoked by German archaeologists’ 1812 discovery of a painted bust of Queen Nefertiti. A copy of that iconic work is displayed in a vitrine beside a white marble bust of Napoleon at the conclusion of the main gallery show at the Fleming. It’s an eloquent, affecting coda to a fitting, impressive exhibit.