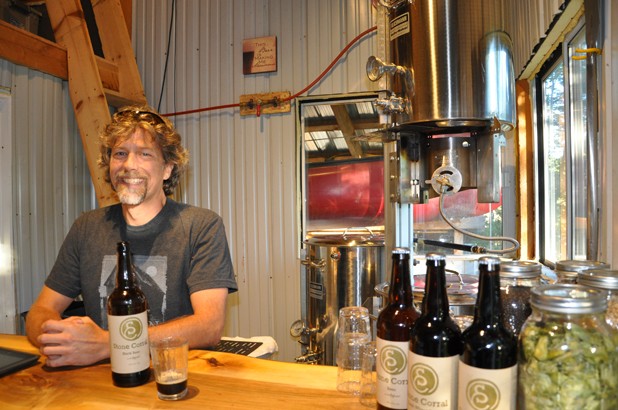 Happily for local beer lovers, it’s becoming a familiar story: A longtime home brewer decides to bring his passion to the next level and go commercial. Bret Hamilton of Huntington’s Stone Corral Brewery, who has 22 years of home brewing under his belt, founded his nanobrewery this past summer inside a converted tool shed on his property. But first, he says, he needed to be sure of three things: that the craft-beer market wasn’t saturated; that “people would like what we’re making”; and, most importantly, “that I didn’t ruin my hobby and passion.”

So far, he’s golden on the first two counts. Twenty-two-ounce bottles of Hamilton’s inaugural beers — the malt-forward, light-bodied Stone Corral Beer; a Bavarian-style dark wheat beer; and a porter/black-ale called Black Beer — have sold swiftly during the brewery’s Thursday night tastings, which began in late August. “Hoppy to extra-hoppy [beer] is really well covered by others. My brew style tends to lend itself toward balance and malt forward,” Hamilton says. “A big part of my philosophy is putting out a beer you can enjoy with delicately flavored foods.”

Stone Corral takes its name from wife Melissa Hamilton’s passion for horses, and the couple marks their boxes with a branding iron designed by a Huntington craftsman. “If it takes a village to build a brewery, we’re in a pretty good place,” Hamilton says. He plans to use a neighbor’s maple syrup to flavor his forthcoming Chocolate Maple Porter, and butternut squash in Butternut Brown ale.

Stone Corral Brewing is open on Thursdays, 4 to 7 p.m., at 830 Taft Road in Huntington. The Hamiltons will sell their beer at the Waitsfield Farmers Market this fall.