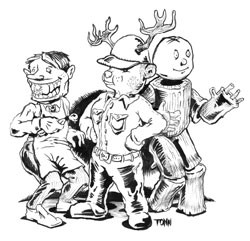 We journalists do lots of reporting on events, occasions, trends, facts and figures. But ultimately, our work is about people: who they are, what they do, where and why. So it’s hardly surprising that we often come across “aptronyms” — that is, names that match a person’s profession, hobbies or other distinguishing characteristics.

Examples: a camp nurse named Sandy Sheets; a burrito restaurateur named John Pepper; a state wetlands coordinator named Alan Quakenbush. Though it’s hard to know whether people’s names influence their actions or career choices, it’s worth noting that four individuals listed below are with the Department of Fish & Wildlife. For certain, it’s a phenomenon that merits further sociological study.

Interestingly, we occasionally come across names that appear to be anti-aptronyms, such as Don Black, the former Ku Klux Klansman who founded the white supremacist website Stormfront. And this year, we’ve included a new category: place-name aptronyms.

So, for what it’s worth, here’s the list of people and places whose names showed up on our radar.

Dallas Anderson: employee at the Texas Roadhouse restaurant in Williston

Dr. Tom Simpatico: director of the Division of Public Psychiatry at the University of Vermont’s College of Medicine

Erica Houskeeper: domestic and international tourism specialist with the Vermont Department of Tourism

Robert and Susan Goodby: Vermont couple who sued their vet after their two cats died of alleged veterinary negligence

Neal Wanless, who lives on his family’s 320-acre ranch near Mission, S.D., bought a $232.1 million winning Powerball ticket in the nearby town of Winner.

On August 7, Vermont State Police arrested Ronald Cargill and cited him for “prohibited acts” for allegedly approaching a woman and three children in a public park and rubbing his genitals. According to a police press release, the incident occurred at Ticklenaked Pond in Ryegate.