Vermonters know that the woods have a lot to give. Aside from lumber and maple sap, they offer a place to play, a respite for quiet meditation and an arena for winter sports. Those who grew up tramping around the backcountry may remember the thrill — or maybe horror — of stumbling on the remains of a busted-up car, an old well or a hunter's hut.

Large-scale midcentury sculpture is not, however, something the woods usually provide — or hide. In 2014, Wendell and June Anderson bought the Bundy Modern and property surrounding the Waitsfield gallery. They restored the building and reopened the gallery last year. And, to date, the couple has found four sculptural works outdoors in various stages of neglect.

"I walk [the property] almost every day," Wendell Anderson said during Seven Days' visit to the Bundy, which is also the Andersons' home. Of the four found sculptures, he can confirm with certainty only one of the makers: Charles Forrester's "John the Evangelist" sits at the expansive lawn's outer edge. It was originally a hollow, bulbous form of concrete set atop a pedestal, its insides populated by small industrial bits of some kind. Now, the work sits askew, with pieces of concrete crumbling off it. Anderson was able to pinpoint the artist because the piece was included in a 1969 gallery catalog.

Harvard-pedigreed architect Harlow Carpenter built the Bundy in 1962. The venue's first decade was lively with exhibitions that featured a large cast of artists, including Dino Basaldella, Judith Brown, Silvana Cenci, Xavier Corbero, Ivanhoe Fortier and Louise Nevelson. In a catalog for one such show, in 1963, Carpenter wrote that he envisioned the Bundy Center for the Arts (as he called it then) as "a country museum where space would be an inherent commodity and painting and sculpture could be viewed leisurely against a Vermont landscape."

The "uncrowded surroundings" provided an art-viewing backdrop that has the simplicity of white gallery walls without their sterility. Each outdoor view offers a background that can be like a "blank slate," though the trees are alive and exist without (or despite) human intervention.

Anderson pulled the second sculpture from the remains of a root cellar. It was "in the hole covered in brambles," he said. Made of several carved log panels with affixed abstract metalwork, the piece "maybe had a Nevelson connection," Anderson suggested hopefully.

Louise Nevelson was a Russian-born sculptor who achieved worldwide renown for her monumental works; her pieces are held in the permanent collections of the Guggenheim Museum, Museum of Modern Art, Smithsonian and many others. While she did show work at the Bundy, a 1993 inventory by the Vermont chapter of the national Save Outdoor Sculpture! initiative did not include Nevelson among the 11 works identified there.

Anderson believes the third work he found is made of bent exhaust pipes, and he described it as looking "kind of like a sea anemone." The tallest of the six pipes rises approximately seven feet. During Seven Days' visit, the gently tangled mass cast a singular shadow on the snow.

The landscape's sculptural heritage could be contagious. Last December, Anderson decided to give the anemone-esque work his own special touch: He coated the pipes with two cans of gloss red paint from the local hardware store. "If you went to the Tate Modern," said Anderson, "it wouldn't be out of place in their foyer." 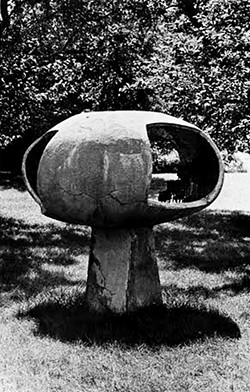 He also hopes to make his own lawn installation using rusted sap buckets from the property's disused sugaring operation.

Anderson found the final sculpture in the woods proper, hidden in the root mass of a fallen tree. He had to use a winch to drag the sculpture — an artful agglomeration of welded cubes atop a pedestal, all made of iron — up an incline with his ATV, and then with a tractor.

This work now lies on its side on the Bundy's front lawn. Anderson plans to enlist Vermont sculptor John Matusz to repair the piece so it can stand upright. A sleuthing look through the SOS! list suggests that this work is by Colombo Manuelli, a still-living Italian sculptor whose work was exhibited at the Museum of Modern Art in 1967.

Some of the sculptures once found at the Bundy have migrated elsewhere. Last June, Jim and Kim Donahue purchased the nearby Round Barn Inn, whose campus is home to approximately 27 sculptures. At least a few of them originated at the Bundy. Kim told Seven Days by phone, "The lore goes that the sculptures were on the Bundy property, and that the structure was uninhabited at the time. The sculptures were being used for target practice, and they were in peril, [so] they were somehow procured by the Green Mountain Cultural Center." The Bundy sculptures at the inn are still technically the property of the GMCC, she asserted.

The real kicker to this story, though, is that there may be at least one more sculpture to be found on the Bundy property. During the Andersons' renovation, David Sellers of Warren's Prickly Mountain reportedly claimed that another, very big work is out there somewhere. Hence Anderson's continual expeditions. "I think that I'm going to find something else," he said.

Because the Manuelli piece looked as though it had been knocked over a precipice, Anderson hypothesizes that a second piece also may have fallen — or was pushed over the edge.

His preoccupation with discovering another buried art treasure, and researching the finds he's already uncovered, dovetails nicely with the Andersons' formal entrance into the world of contemporary art. "We're trying to learn our way into becoming gallerists," he said.