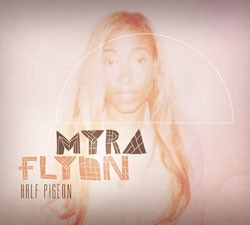 When her name comes up in conversation or is seen on show flyers around Burlington, Vermont expat Myra Flynn is often linked with local pop songwriter Gregory Douglass, a frequent collaborator during her time here. Perhaps because of that association — and because male-female duos make me think of the folky likes of Ian & Sylvia or David Rawlings and Gillian Welch — I initially put on Flynn’s newly released third album, Half Pigeon, expecting to hear some old-fashioned, sentimental folk music. And I quickly found out that I had misjudged my assignment entirely.

It is clear from the very beginning of Half Pigeon that Myra Flynn is indeed a singer-songwriter, though not in the truly traditional sense. “Last Love” is an undeniably danceable statement of affection. While the title could suggest something bitter, the lyrics themselves (“Don’t you wanna be my last love?”) are delivered with soulful sincerity over a Prince-style beat. There even seems to be a lyrical nod to John Legend’s perfectly heart-wrenching debut single, “Ordinary People,” when Flynn sings, “This ain’t a honeymoon … I want you to stay.”

The production throughout Half Pigeon is both eclectic and consistent. “Friends” is a dark, anthemic rock song with Dylan Allen’s crunchy guitars and Matt Bogdanow’s loud drums. It also includes a howled chorus with the amazingly concise lyrics: “We’ve got some talking to do / If I’m gonna have to go to parties with you / ’Cause I don’t wanna be your friend.”

After the storm of “Friends” comes the still-impassioned calm of “Let Yourself Down.” The instrumentation is tight and the sing-along outro builds to a perfectly frustrated crescendo before Flynn solemnly delivers her last few lines over her lone piano.

The album closes with Half Pigeon’s closest thing to a classic singer-songwriter’s song, “The Saddest Man.” Flynn accompanies herself on piano. And that’s all. There are no drum machines or distorted guitars anywhere. There is only Flynn. The effect is heartbreaking and haunting. And perfect. The real fucking thing is lyrics like these: “I’ve always wondered what I could have done or said or tried or given and folded or shed / To make you feel at home beside me.” Jesus.

At its most organic, Half Pigeon recalls hints of 2012 darlings Alabama Shakes, and at her very danciest, Myra Flynn seems almost to channel Janet Jackson in her badass prime. What is truly noteworthy is that Flynn is often capable of delivering on both ends of this scale in a single song — and with a unique voice and style to boot.

Myra Flynn plays a string of local dates with Gregory Douglass in support of her new record this week, including Friday, September 27, at the Higher Ground Showcase Lounge; Saturday, September 28, at the Celebration for Expressive Arts in Montgomery; and Sunday, September 29, at the Chandler Music Hall in Randolph. Half Pigeon is available at myraflynn.com.