My Little Cupcake to Close; Belleville Bakery to Open Storefront in Burlington

One sweet business will make way for another at 217 College Street in Burlington this spring.

My Little Cupcake, which has occupied the corner of College Street and South Winooski Avenue since October 2011, will close at the end of April. Belleville Bakery will open in its place in August.

Belleville owner Shelley MacDonald has been searching for a brick-and-mortar location for her home-based bakery since September 2020, when she moved to Burlington from Paris, where she also ran a home-based bakery and catering business and studied at Le Cordon Bleu. 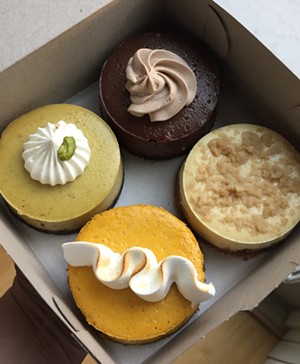 In Burlington, she built a following through her mailing list, offering her French-inspired pastries, cakes, bread and savory prepared meals through weekly pickups and regular pop-ups.

My Little Cupcake started as a home business in 2009; co-owner Michelle Trudell opened her first location in Essex in January 2011 and the Burlington spot later that year. The Essex location closed in December 2018.

My Little Cupcake sold a large portion of those cupcakes to parents of students at the local colleges, who were looking to send treats to their children for birthdays, exams and holidays.

Between the university market, tourists walking in, locals looking to celebrate and wedding and wholesale orders, the business still sells out almost every day, Trudell said.

“I think I should probably call it quits while I’m ahead,” she said. “The pandemic just makes you kind of refocus, and with labor and cost of ingredients going up — along with high rent rates in Burlington — you have to make a lot of cupcakes to make [it work].”

MacDonald first approached My Little Cupcake to inquire about the space a year ago. Trudell, who had recently bought out her business partner, wasn’t interested in giving up her spot.

“I was excited about my plans for the future,” Trudell said. “Everyone was getting vaccinated, and I thought everything was going to go back to normal really soon.”

A few months ago, Trudell was eating lunch down the block at Zabby & Elf’s Stone Soup when owner Avery Rifkin mentioned that MacDonald was still interested, she said.

“My lease is up in a few months, so I thought maybe,” Trudell said. “We’re both women; we’re both trying to do something, to own a business. So I get it.”

Trudell considered relocating My Little Cupcake to St. Albans, where she lives, before deciding to close completely. The business’ last day will be April 30; then she’ll take a month to clean and sell equipment before MacDonald officially takes over and starts renovations.

“I feel really calm about it,” Trudell said. “I’m just grateful that I could make a business go for so long making tiny cupcakes.” MacDonald hosted several pop-ups at the bright, brick-walled My Little Cupcake space this winter. She’s built a mailing list of more than 1,100 subscribers since moving to Burlington.

“I could not have made it any harder for people to deal with me,” MacDonald said with a laugh of her business model so far. “That people show up week after week is surprising.”

Every day, MacDonald said, the Belleville storefront will offer several different options for bread and sweet and savory fare. Customers will be able to special order full-size layer cakes with advance notice, or pick up smaller “babycakes” in flavors such as Champagne-chocolate and lime-cardamom.

Breakfast dishes such as quiche, pastries, yogurt parfait and biscuits with compote and cream will be available for on-site dining via counter service. So will “lunchy” items such as salads and soups, along with fresh juices and drip coffee from Kru Coffee.

Belleville will have a grab-and-go fridge with prepared meals, such as cold plates with roast beef and potato salad, North Africa-inspired dishes, and coronation chicken pot pies with curry and homemade mango chutney sauce. Individual cookies and financiers — made with imported Iranian pistachios and Belgian chocolate — will start at $2.

“The last two years have just been [about me] hearing from people, getting their feedback,” MacDonald said. “It’s a learning adventure: learning and getting to know people and creating a neighborhood space.”