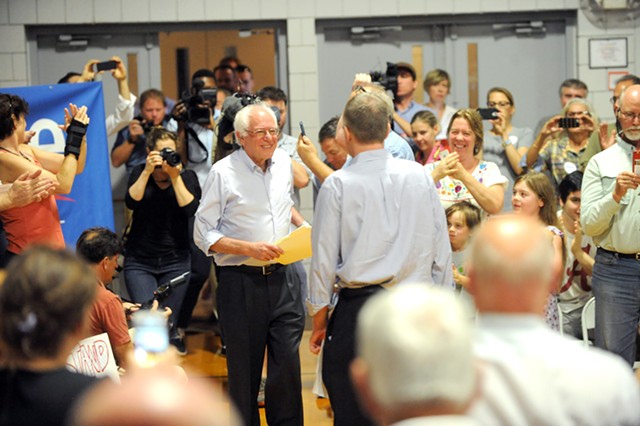 Speaking Sunday at the New Hampshire Democratic Party's annual Jefferson-Jackson dinner in Manchester, Sen. Sanders pledged to "pull off one of the greatest political upsets in the history of our country."

But can he, really?

Since mid-October, when Vice President Joe Biden announced he wouldn't join the presidential race and former secretary of state Hillary Clinton outperformed expectations at a Las Vegas debate and a high-stakes congressional hearing, Sanders' momentum has seemed to slow.

In most national polls, he's struggled to get within 25 percentage points of Clinton. In New Hampshire, where Sanders led in August and September, Clinton has evened things out. And in Iowa, Clinton has maintained a steady lead.

Meanwhile, Clinton has continued to lock up establishment endorsements — and corresponding superdelegate votes: On Sunday and Monday, she held three events in three cities to trumpet support from Boston Mayor Marty Walsh, seven New Hampshire mayors and 13 of the 14 Democratic women serving in the U.S. Senate*. (Elizabeth Warren, the progressive darling from Massachusetts, was the lone holdout.)

After adopting several Sanders positions on trade and energy policy, Clinton appears to be pivoting back to the center with an eye to the general election. Speaking Sunday in Boston, she again criticized Sanders' single-payer health care plan — not exactly a way to appeal to the base — saying, "I'm the only Democratic candidate in this race who will pledge to raise your incomes, not your taxes."

But lest you think the race is over, University of New Hampshire political scientist Andrew Smith says: Hold on!

"Two months is a lifetime in a primary," the UNH Survey Center director says. "Speaking as a pollster, polls don't mean much. Frankly, voters aren't paying any attention to the race yet, and they won't be until the last few weeks."

According to historical exit polls, 35 to 45 percent of New Hampshire voters make up their minds in the last three days of a campaign, Smith notes, while 15 to 20 percent do so on Election Day itself.

"Hillary's been in the public eye for 25 years," he says. "Here's a guy who's trying to play catch-up, and he's doing remarkably well."

Former New Hampshire Democratic Party chair Kathy Sullivan expects her state's February 9 primary to be a close one. But the longtime Clinton supporter thinks her candidate has the edge, in part because her campaign is being run by some of the best operatives in the state.

"They have a plan," she says. "They stick to the plan and just carry it through."

A recent Quinnipiac University Poll of Iowa, which holds its caucuses February 1, shows a similar dynamic in the Hawkeye State. Asked who is "honest and trustworthy," cares about their "needs and problems" and shares their values, more Iowa Democrats said Sanders than Clinton. But she's leading him among likely caucus-goers, 51 to 41 percent.

"I think what drives a lot of this is that Secretary Clinton is viewed as the more likely candidate to actually win the presidency than is Sen. Sanders," explains Quinnipiac assistant director Peter Brown.

Among the biggest threats facing Sanders is one his own campaign created: public expectations it may struggle to meet.

Early last month, his New Hampshire state director, Julia Barnes, told Bloomberg that hers was a "must-win" state for Sanders. The next week, campaign manager Jeff Weaver reinforced the sentiment, telling Seven Days, "I think New Hampshire is pretty much a must-win, but I think if you come very close in Iowa, I think that's as good as a win."

A week after that, senior strategist Tad Devine tried to walk those comments back and better manage expectations.

"Obviously we have to do very, very well, beginning in Iowa and New Hampshire," he told Seven Days. "I don't think we have to win any single state to win the nomination of the Democratic Party."

Devine warned that it was dangerous to buy in to such an argument, because the Clinton campaign would only "keep moving the goalposts on this down the field" — in Nevada, then South Carolina and so on.

Soon thereafter, Weaver appeared to be back on message.

"The truth is, campaigns are a long haul — and we're in it for the long haul," he said. "There is no make or break."

This story originally appeared in the Fair Game column “Gun Shy” in the December 2, 2015, issue of Seven Days.