Musicians, and Audiences, Immerse Themselves in Two Composers' Complete Works 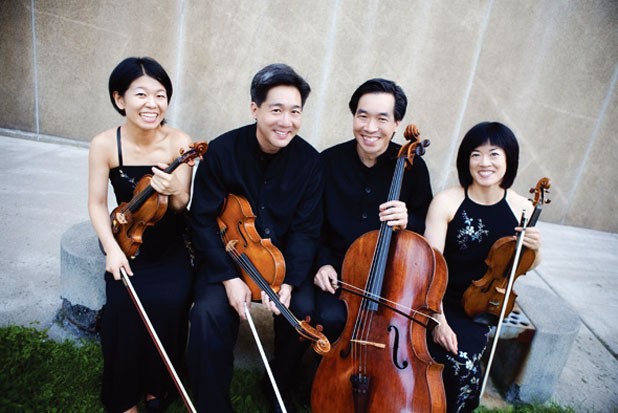 Every once in a while, if a presenter is willing, classical-musical audiences are treated to a “cycle”: a series of concerts featuring all of a composer’s works in a single genre. For musicians, according to Middlebury College piano professor and soloist Diana Fanning, preparing for a cycle is an immersion process that amounts to a “spiritual quest; it’s an act of reverence and an act of homage to the composer.” For the audience, she adds, it’s like someone “putting jewels out on a black velvet table.”

Next week, one cycle will come to an end and another will begin. For his fifth and final Middlebury concert over two years, internationally renowned pianist Paul Lewis will perform the last three of Schubert’s 21 piano sonatas. And, in Burlington, the Ying Quartet will kick off a series in which six different groups perform Beethoven’s 16 string quartets. That cycle, says presenter Melvin Kaplan, will take place over the next 17 months.

When the same musician plays an entire cycle, the interest for listeners lies in the depth of knowledge the performer brings to the works from having studied them as a body; that includes insights into their interrelationships and how sensibility and technique develop from the first work to the last. Schubert lived only 31 years, but his first piano sonata, written at age 18, scarcely anticipates the emotional gravitas of his last three sonatas, composed two months before he died of syphilis in 1828.

Exploring that range is “kind of like Mount Everest,” notes Fanning, for pianists such as Lewis, Alfred Brendel (Lewis’ mentor) and Daniel Barenboim. Lewis’ project of recording the sonatas is ongoing; so far, he has done seven of the later works — including the last three on two different CDs — to serious critical acclaim. The pianist’s Middlebury concert comes a few days after his appearance at Lincoln Center’s Alice Tully Hall in New York City, among other venues worldwide.

The Beethoven string-quartet cycle will see a different treatment, with six different groups each performing (roughly) one early, one middle and one late quartet from the composer’s output. Plenty of quartets have performed and recorded the entire cycle, says Kaplan, who founded the now-defunct Vermont Mozart Festival and continues to bring musicians to the area through his agency, Melvin Kaplan, Inc. He particularly recommends the Budapest and Guarneri Quartets’ recordings.

But Kaplan chose six groups — the Ying, Ariel, Leipzig, American, Parisii and Talich Quartets — to perform the cycle because, he says, “It adds another dimension [for audiences] to experience what someone who grew up in Prague, or Germany, or the U.S. does with these quartets.” The Ying Quartet, whose members include three siblings, is resident quartet at the Eastman School of Music at the University of Rochester.

Like Schubert’s piano-sonata cycle, Beethoven’s string quartets offer a glimpse into the composer’s lifelong development as an artist. “There are only … four composers who wrote quartets from the beginning to the end of their lives,” Kaplan explains, noting that Shostakovich turned out 15, Mozart 23 and Haydn 68. (“They’re miracles,” he says of the last, chuckling, “but you can’t do 68 quartets in a cycle.”)

Beethoven’s are “a wonderful example of where his mind was going that whole time,” Kaplan says. “They run from his early style to some of the most deep, intricate, complicated things that have ever been composed.” They’re even more wondrous, he adds, for having been written after Beethoven lost his hearing.

In performance, Kaplan continues, the string quartets are “wonderfully rewarding in so many ways — as entertainment, as deep philosophical view of life. Having a chance to experience them, even if you don’t know anything about music, will enhance your life.”

Such chances are rare. The last time Burlington saw a Beethoven string-quartet cycle was more than 30 years ago, says Kaplan, when he persuaded the then-new Emerson String Quartet to perform it on the basement level of the Church Street mall. There’s no telling when the area will be proffered its next array of jewels on black velvet.